Over Half of New U.S. Homes Are Built in the Line of Wildfires 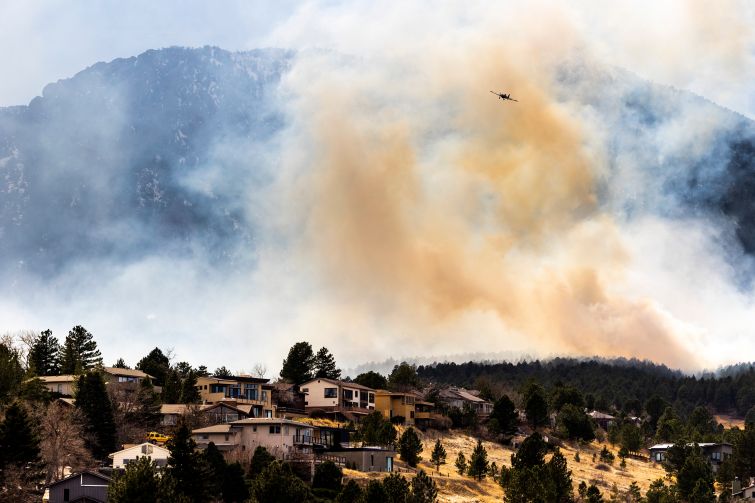 BOULDER, CO - MARCH 26: An air tanker flies above the NCAR Fire on March 26, 2022 in Boulder, Colorado. The wildfire, which has forced almost 20,000 people to evacuate their homes, started just a few miles away from where the Marshall Fire destroyed more than 1,000 homes in December, 2021. Getty Images

You can’t eat the air and you can’t drink the sea, as the great Newfie bard Ron Hynes put it, but real estate developers across the U.S. clearly haven’t heard that song.

Homebuilders continue to build the majority of housing in areas of the country prone to climate disasters like wildfire and drought, according to a new report from Redfin.

Fifty-five percent of homes in America built in the last decade face wildfire risk, the study said, while 45 percent are or will be subject to the pitfalls of drought, especially in the Phoenix metropolitan area where — according to Redfin — builders have not heeded warnings and soon there may not be enough water to go around. In states like Colorado, California and Arizona, at least 90 percent of new homes have been built in areas at risk of wildfires.

Fire risk has grown most drastically. The report compares the last two years to the period between 1900 and 1959 when only 14 percent of homes were at risk of being in the line of a literal fire and 37 percent of homes could suffer the consequences of a drought.

It isn’t all the fault of developers; they may just be following demand, according to the report. Recent migration patterns have seen Americans trading city and suburban life for cheaper housing with lower taxes. Salt Lake City is one such example.

“There’s no room left to build in Salt Lake City, so developers have been moving into the surrounding mountains, which are more prone to wildfires and drought. Record-breaking temperatures and a lack of snow have turned these areas into tinderboxes,” Redfin Market Manager Ryan Aycock said in the report.

Not only are these areas more primed for wildfires, but the additional construction can make fires both more likely and more severe.

“Herriman — a city just south of Salt Lake City that’s right up against the mountains — is attracting tons of builders. Fires were never that big of an issue when Herriman was mostly vacant land, but now scores of people are moving into harm’s way,” Ayock said.

In Colorado, 90 percent of homes built in the last year are in areas prone to wildfire. That figure is 97 percent in Arizona, 96 percent in Oklahoma and 91 percent in California. In addition, the threat of drought overlaps in areas served by the dwindling supply of water from the Colorado River and other meager, nearby resources.

Homebuilding has exploded in Arizona over the last few years, and builders have expanded to available land, which tends to be more rural and drought-prone, per the report. “In Casa Grande — a city just south of Phoenix — builders are selling homes despite warnings that there may not be enough water to go around,” Phoenix Redfin real estate agent Heather Mahmood-Corley said in a statement.

Potential buyers are warned by developers about water scarcity in areas around Phoenix, because the effects of climate change are apparent, according to Mahmood-Corley, but buyers in other parts of the country aren’t so lucky.

In August, the National Resources Defense Council commissioned a report stating that people buying property in North Carolina, New York and New Jersey were commonly not warned about how their homes could be affected by flooding. About 6.6 percent of homes bought in 2021, or 28,826, were in flood-prone areas, which added $46,887 in hidden costs to a 15-year mortgage.

“New York’s disclosure laws do not explicitly require that a seller tell a homebuyer about past flood damages,” Joel Scata, a water and climate attorney at NRDC, said in a statement. “The failure to require disclosure of past flood damages is already costing New Yorkers tens of thousands of dollars. Homebuyers must have the right to know whether their dream home is a potential nightmare.”

The majority of homes accounted for in terms of storm risk are in the Northeast, according to Redfin, where builders seem to have learned to mitigate these risks.