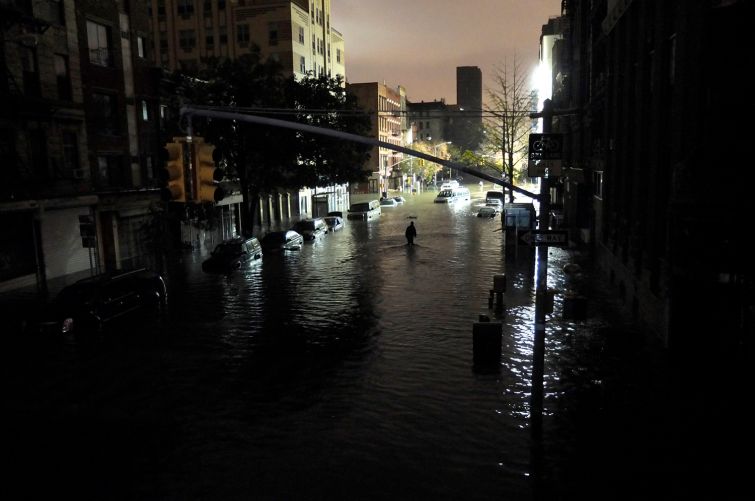 What Linda Marini remembers most about Hurricane Sandy is the smell.

“Everything was dark,” Marini said. “The stench from the sewage that came up from the storm, the rotting food — that’s something that stays with you.”

Hurricane Sandy, and the storm surge that came with it, completely decimated Marini’s Italian restaurant and market, Barbarini, then located at 225 Front Street in Lower Manhattan. Marini had an inkling of the damage when the superintendent of her eatery’s building called to tell her that one of Barbarini’s commercial refrigerators was floating down the street. But as a Lower Manhattan resident with three young kids, she wasn’t able to see the shop until the day after the Halloween storm 10 Octobers ago.

What she saw stopped her in her tracks.

“To watch everything that you spent your life savings on just destroyed like that, overnight, that’s hard,” Marini said. “We had on average maybe 50 people a day volunteering to help, but there was nothing to salvage.”

In the immediate aftermath of the storm, neighbors volunteered to watch her kids and locals formed an email thread to communicate. In Queens, Donovan Richards, then a city staffer in the Rockaways under Council member James Sanders Jr. and now the borough’s president, remembers getting generators from Texas residents after putting out a call for help on social media, sleeping in shelters, and working out of darkened offices at 1526 Central Avenue when the power went out and stayed out for days after the storm.

Some Lower Manhattan businesses nabbed grants from the Downtown Alliance, which distributed $1.6 million to small businesses at an average of $15,000 a pop, according to alliance spokesperson Andrew Breslaeu. Breslaeu said around 90 percent of businesses that shuttered in the wake of Sandy reopened by the beginning of 2013 — but Marini, already worried about the next storm, decided to start fresh with a new Italian outpost Da Claudio a few blocks north at 21 Ann Street in November 2014, she said.

Marini’s story is one of thousands of individual tragedies Hurricane Sandy created when it walloped the five boroughs in late October 2012. The storm killed 44 people, caused about $19 billion in damages and bashed the Brooklyn, Queens and Staten Island coastlines.

To date, the Federal Emergency Management Agency (FEMA) has spent $14.1 billion to rebuild public infrastructure and issued just over $1 billion in grants to individual households in New York state, according to the organization. Up until Hurricane Maria hit Puerto Rico in 2017, Sandy was the costliest disaster in FEMA’s history, in terms of the federal funds spent on the recovery effort, Donald Caetano, FEMA’s director of external affairs, said.

In the two years that followed the storm, the city studied ways to protect southern Manhattan, awarded more than $54 million in grants to businesses across the city, and, though it was criticized for a slow start, helped rebuild damaged homes, particularly in Queens, to be better prepared for the next storm.

But the rush to action that immediately followed Sandy is in stark contrast with what the city has accomplished since. A decade after Sandy hit the Big Apple, New York City has not started construction on many of its infrastructure projects. And it has yet to even spend all of its recovery funds, according to an October report from New York City Comptroller Brad Lander.

Today, the city has a litany of projects aimed at protecting the five boroughs from coastal storms. In Manhattan, the East Side Coastal Resiliency (ESCR) project — 2.4 miles of planned floodwalls and floodgates running from Montgomery Street to East 25th Street — broke ground in December of last year after at least six years of planning. But, of the $1.9 billion allocated for the ESCR budget, the city has spent just 13.3 percent, according to the comptroller’s report.

“New York City’s coastal resiliency projects lead the nation in complexity and size, but these projects take time to complete, and there is more work to be done,” Kayla Mamelak, a spokesperson for the city, said in a statement. “The comptroller’s recommendations are welcome and will be factored into our continued efforts towards long-term resiliency projects in New York City. Our work to develop and strengthen our infrastructure in response to climate change must move forward with urgency, funding and partnership within all levels of government.”

Urgency is the operative word, given that several other Lower Manhattan initiatives will break ground only in the coming months. In a few weeks, the city will begin construction on part of the Lower Manhattan Coastal Resiliency project (LMCR) — four central initiatives aimed at protecting the Brooklyn and Manhattan bridges, the Seaport, the Financial District, the Battery and surrounding Battery Park communities from severe storms. The Department of Design and Construction will  in the next few weeks install flood walls and deployable flip-up barriers to protect the Two Bridges neighborhood from storm surge — a first step for the $5 billion to $7 billion LMCR project.

The Battery Park neighborhood will also begin to see some changes this year, as the city starts to install flood barriers on the Hudson River coastline from the Museum of Jewish Heritage through Wagner Park and down to the Battery — a project expected to wrap up in 2024, according to Gwen Dawson, vice president of real property for the Battery Park City Authority (BPCA). A protective plan for the northwest side of Battery Park is still in its design phase, and the BCPA finished installing an independent flood barrier system around its ballfields in December 2021, she added.

It’s not just Manhattan that’s been slow going. The Army Corps of Engineers recently released its draft of a $52.6 billion protection plan for New York and New Jersey, which would include constructing storm surge barriers around flood-prone neighborhoods — like the area around the Gowanus Canal in Brooklyn and Jamaica Bay and Flushing Creek in Queens — plus some protective measures like an elevated promenade, deployable flood barriers, and flood walls on the lower west side of Manhattan and East Harlem. The project wouldn’t begin construction until 2030, however, with an estimated completion date of 2044.

By 2030, New York City could see Sandy-sized floods of 7.5 feet every five years as a result of sea level rise blamed on climate change, according to a study from Rutgers University and the National Academy of Sciences. A city study found that 37 percent of buildings in Lower Manhattan will be at risk from storm surge by the 2050s.

In theory, the Army Corps plan will complement other local measures, like the city’s plan to install flood walls, deploy floodgates and raise streets in Red Hook, Brooklyn, starting in 2024 and another $336 million Army Corps project to replenish the beach on the Atlantic Ocean side of the Rockaway Peninsula — which the city started in 2020 and expects to wrap up in 2026. The Army Corps has also planned a $615 million project to build drainage structures, seawalls and levees on seven miles of Staten Island coastline from the Verrazzano-Narrows Bridge to Oakwood Beach. (It’s worth noting that the New York State Department of Environmental Conservation expected the Staten Island project to start in early 2022, though a spokesperson for City Hall said it wouldn’t begin until early next year.)

Given the scale of these kinds of resiliency projects, the lengthy timelines might not be all that shocking. The city has to apply for and negotiate funding from a variety of sources, such as the state, its own coffers, the federal government and FEMA; examine a proposed project’s environmental impact; and identify contractors to design and execute a plan (which can require jumping through additional disclosure and hiring hoops). City agencies often run into unknown costs or technical challenges that can change a project’s budget, requiring another FEMA review, said Louise Yeung, chief climate officer for the comptroller, in a press release discussing the comptroller’s report. Plus, all of these projects happen amid regular government turnover through city and state elections.

The pace of these infrastructure projects is an “international disgrace,” said Malcolm Bowman, a distinguished professor of oceanography at the State University of New York at Stony Brook.

“If Sandy hit next week, the damage would be equally bad or worse,” Bowman said. “The East Side Resilience Project has started, but apart from that, the greater metro region is just as vulnerable as it was 10 years ago.”

Richards agreed. In 2017, Richards told Curbed that the Rockaways were just as vulnerable that year as the peninsular area  was when Sandy hit in 2012. Now in 2022, the Queens borough president told the same to Commercial Observer. And those particularly at risk are some of the city’s poorest residents, he added.

About 17 percent of New York City Housing Authority buildings lie within the 100-year floodplain — an area with a 1 percent or higher chance of experiencing a flood in any one year, according to the Department of Environmental Conservation. Plus, 79 percent of New York City land used for transportation and public utilities  — like electric cables, gas lines, bridges and highways — lie on the 100-year flood plain, along with 67 percent of outdoor recreation areas, according to the comptroller’s report.

And, in terms of property, the comptroller predicted that rising tides and more frequent storms would put more than $242 billion worth of buildings at risk of coastal flooding by the 2050s, with Brooklyn experiencing the greatest risk to its property values. As the city stares down the barrel of worsening storms, it is still “a ways away” from spending the grants it got for Sandy recovery and resilience, Brooklyn Borough President Antonio Reynoso said in a statement.

“The climate crisis is moving far faster than we are,” Lander said in a statement. “Superstorm Sandy was a wake-up call for the devastating risks that climate change poses to our city — but from the trudging pace of too many resiliency projects, it seems like we’re still asleep.”

In not so many words, the comptroller’s recommendation was to hurry up. Lander also advised the city to better track its spending, establish funding sources for future investment, and develop a citywide long-term resilience plan.

The pace of the city’s progress has been glacial (even as the Earth’s glaciers melt), Eric Goldstein, New York City environment director for the Natural Resources Defense Council, said. At the very least, though, New York City is at least aware of the problem, he added.

“The best news is the issue is on the public policy agenda,” Goldstein said. “The higher frequency of superstorms and intense weather patterns have convinced New Yorkers that this is a problem that needs to be addressed.”

So, color New Yorkers convinced, as they finally get to see some of New York’s biggest infrastructure projects kick off this year.