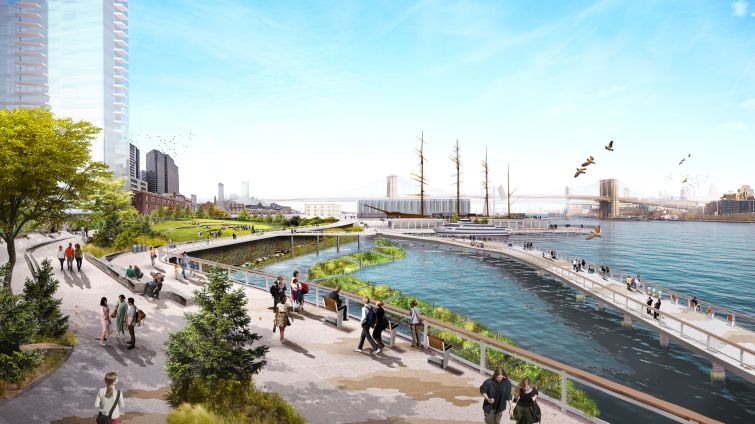 A rendering of the EDC's proposed plan to protect Lower Manhattan from the consequences of climate change — like storm surge and sea level rise. Photo: Economic Development Corporation

New York City has proposed extending the coastline of the East River up to 200 feet from its existing shore with a two-level protective esplanade meant to combat sea-level rise and storm surge, which come when climate change worsens. This is just the latest element in the city’s four-part plan to protect Lower Manhattan.

The project, revealed on Wednesday, would cost between $5 billion and $7 billion and could prevent up to $1 billion in annual damages when completed in the 2050s, according to the New York City Economic Development Corporation (EDC) and the Mayor’s Office of Climate Resiliency (MOCR), co-authors of the plan.

Dubbed the FiDi and Seaport Climate Resilience Master Plan, the project would protect 140 acres of Lower Manhattan between Battery Park and the Brooklyn Bridge — one of the nation’s largest central business districts and among its most vulnerable to climate change. For the project, which has been in development since 2016, the city would break ground in five years at the earliest.

“There’s no doubt climate change is here,” Rachel Loeb, the president and CEO of the EDC, said in a statement. “Sea levels are rising, and stronger, more devastating storms will only continue, which is why we must protect our coastline and safeguard our vulnerable historic Seaport area and Financial District. If we do not take action now, residents, businesses and critical infrastructure are put in jeopardy.”

The project calls for two levels of roughly a mile-long stretch of protective infrastructure, extending the shoreline into the East River to 200 feet from 90  feet. Along the two-level esplanade would be a new station to pump out floodwater and a limited number of floodgates along the shoreline that could be closed during coastal storms. 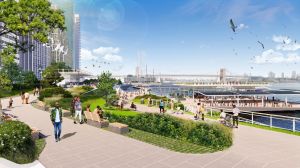 The esplanade would also create another open public space for New Yorkers and visitors, and the coastline would appear two stories higher than the waterfront is currently.

The walkway would provide access to coastline streets and neighborhoods with ways to enter and exit the esplanade on Whitehall, Broad, Old Slip, Wall and Fulton streets and Peck Slip, Old Slip and Vietnam Veterans Memorial Plaza, according to the plan. It would also reincorporate bike paths for bicyclists to travel along the coastline.

The lower level, raised about 3 to 5 feet above the water, would protect against sea-level rise and create a continuous walkway from the Battery to the Brooklyn Bridge. The upper level would be placed 15 to 18 feet above sea level and double as a floodwall, protecting the coastline against severe storms like 2012’s Superstorm Sandy — which killed two people in Lower Manhattan, damaged thousands of homes, interrupted subway service and flooded 17 percent of the city’s land, according to the city. 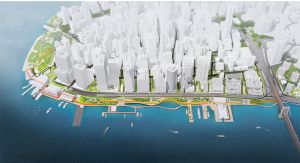 Sandy devastated New York as a whole when the storm hit the city’s 500 miles of coastline, destroying more than 600,000 homes in New York and New Jersey alone, causing billions of dollars in damage, and killing 44 New York City residents. FEMA authorized more than $14.1 billion in funds for governments and nonprofits to clear the wreckage, and more than $1 billion to 117,664 individuals in New York state.

“It was the East Side that was devastated during Superstorm Sandy [on] Oct. 29 in 2012,” Catherine McVay Hughes, who at the time was chair of Manhattan Community Board 1, which encompasses the Financial District and Seaport, told Commercial Observer. “Water went blocks in. It just didn’t stop at the water’s edge and it’s taken years to rebuild the infrastructure that was damaged.”

Hughes, an engineer by trade who was in the area when the superstorm hit, said that the water rushed into the basements of some buildings, crippling electrical and elevator systems that are often stored in commercial buildings’ basements. When severe storms hit, small businesses can be “wiped out overnight,” she added.

But Sandy wasn’t alone in its destruction. New York saw two devastating storms this year, Tropical Storm Henri in August and Hurricane Ida in September. Henri dropped so much rain in one hour on the city that it broke the Big Apple’s previous rainfall record set in 1888, according to the city.

Just as Sandy inspired the initial talks for a plan to protect Lower Manhattan from the consequences of climate change, as well as the 2014 Southern Manhattan Coastal Protection Study that became the basis of the city’s more recent efforts, Ida reminded residents and business owners alike that climate change is here, and will only get worse if left unchecked.

Should the city do nothing, it expects constant flooding to cause $20.3 billion in total losses from 2021 to 2100, without even accounting for costs to repair city services like the subway and the electrical grid. The city’s buildings alone would suffer $2.5 billion in damages, and local businesses stationed near the coastline would see more than $15 billion in losses.

“There’s a real nexus between commercial job centers and climate impacts,” Elijah Hutchinson, vice president of the EDC, told CO. “Sea levels have already risen a foot in New York City since 1900. And if we don’t do anything, the Financial District and Seaport will begin to flood frequently by the 2040s and daily by the 2080s. By 2100, the area between Water Street and the current shoreline will be permanently under water.”

It’s not just storm surge that compromises the island of Manhattan — groundwater table rise would destabilize about 7 percent of buildings by 2100. It would also corrode nearly 40 percent of the city’s massive network of underground utilities. The sewer system, responsible for draining flood water, already needs improvement — a project that the city estimates would cost billions alone.

“There is no threat more existential to the future of New York City, or the world, than that posed by the climate crisis,” U.S. Rep. Jerry Nadler, whose district includes Lower Manhattan, said in a statement. “I have long advocated for desperately needed resiliency measures to be implemented after Superstorm Sandy, and today’s release of the FiDi & Seaport Climate Resilience Master Plan is another important step in protecting these neighborhoods in Lower Manhattan from future storms.” 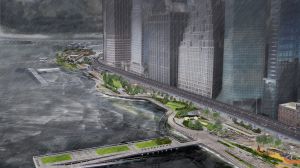 But the plan is still a long way from getting the green light. The project will be subject to an environmental impact review as well as local, state and federal approvals for construction permitting — an approval process that could take some time. The city allocates five or more years to get the permits approved, environmental review finished and initial design work done before beginning construction, according to the plan. The need for its implementation, however, is urgent, said Hughes.

“This [project] is absolutely critical and it can’t be funded or started soon enough,” Hughes, a Lower Manhattan resident for the past 33 years, said.

The Army Corps of Engineers will advise on the plan, but the city still needs to identify the proper office to oversee the entire project and will need to get federal funding, which it plans to apply for next year. Certain elements of the plan, like a pump station to manage stormwater, could be completed before 2035, per the city.

The proposed project has gone through several iterations, including floating an option to tear down the FDR Drive while extending the coastline. The current proposal could be constructed whether or not the FDR remains or is torn down, according to plan documents.

The city identified potential pump station sites between Old Slip and Broad Street and another closer to Battery Park to the west of Whitehall Street. It also integrates green infrastructure — plant life intended to absorb stormwater before it enters the sewer system.

The plan to protect the Seaport and Financial District is one part of four efforts the EDC and the mayor’s office created after Superstorm Sandy to protect the Brooklyn and Manhattan bridges, The Battery and surrounding Battery Park communities. Those efforts included raising the bulkhead of the Brooklyn Bridge, building flood walls underneath the two bridges and rebuilding the Battery waterfront at a raised height to cope with sea-level rise.

Mayor Bill de Blasio initially allocated $800 million for the efforts when he announced them in 2019, followed by another $110 million in October.