The Answer to Brooklyn’s Housing Dearth Could’ve Been the Shore. Along Came E-Commerce

‘There’s been a decades-long fight between those who see a future in dense housing and those who want to preserve … an industrial working waterfront.’ 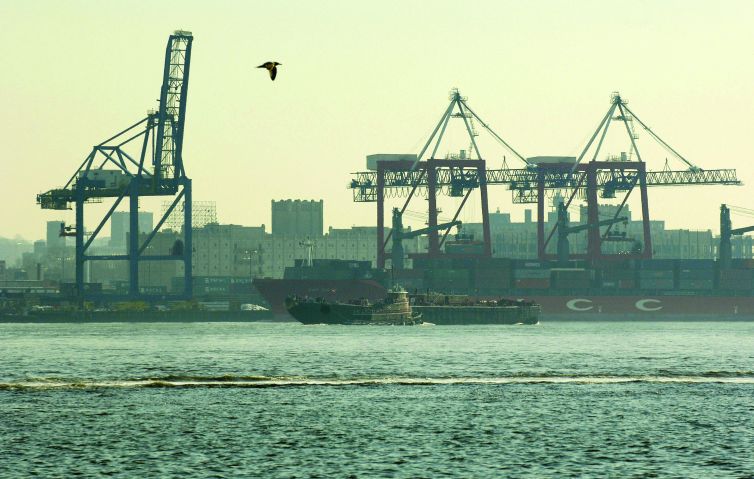 For generations, Brooklyn’s waterfront has been romanticized as the place where its past, present and future converge all at once.

Its shipyards once employed 70,000 people who built warships that fought in World War II. Hollywood production companies flocked to its shores to film blockbusters and TV shows. Warehouses were converted to luxury condos, or stuck around long enough to transport consumer goods and groceries to millions of New Yorkers during the pandemic.

Now, a swath of land along the New York Harbor between Atlantic Avenue and 59th Street could hold the key to the borough’s future as a major solution to the city’s acute housing needs — or it could continue to service New Yorkers’ unrelenting demand for next-day shipping.

“In some ways, it’s the last frontier of the waterfront and the most potential to generate dense housing in a relatively near term,” said David Lombino, managing director of external affairs at Two Trees Management, a developer. “There’s been a decades-long fight between those who see a future in dense housing and those who want to preserve manufacturing and an industrial working waterfront.”

For much of the 21st century, housing has been winning. The Bloomberg administration enacted 120 rezonings, including much of the Greenpoint-Williamsburg waterfront, that spurred the construction of 10,000 residential units, and dedicated funding that eventually led to the creation of Brooklyn Bridge Park. The de Blasio administration vastly expanded the city’s ferry service and added new piers, making waterfront real estate more valuable.

But recent large-scale development projects have stumbled. Developers pulled plans to rezone Industry City after widespread community opposition in 2020. And a year ago the city’s Board of Standards and Appeals panned Alex Washburn’s 15-story “model block” for proposing residential units in an area zoned for industrial use.

“There’s always been competing interests on waterfront property,” Bradley Cohen, senior vice president of industrial logistics at brokerage CBRE, said. “Is it better to have upscale or dense residential with beautiful views of the Statue of Liberty? At the same time it still remains one of the best access points into and around Manhattan and continues to be one of the most highly sought after last miles into the city.”

Developers dreaming of luxury towers with pristine views of the Manhattan skyline from the South Brooklyn waterfront will likely have to wait longer. The Port Authority of New York and New Jersey (PANYNJ), which owns 100 acres along the waterfront, has given no indication it would unload its assets for redevelopment. Its lease with the Red Hook Container Terminal, which operates Piers 9 and 10, is due to expire in 2023, although the tenant has the option of extending the agreement another five years and wants to remain at the site. (A PANYNJ spokeswoman wouldn’t comment on negotiations.)

Instead, its ports in Brooklyn and New Jersey have been stirring with activity throughout the pandemic and processed a record amount of cargo volume in March 2022, up 47 percent from March 2019. To accommodate the flow of import containers, the Port Authority rented nearby warehouses, sought federal money to repair existing piers, and has looked to build more facilities to move and store cargo arriving by water.

“The Port Authority is not interested in selling right now,” Carolina Salguero, founder and president of PortSide New York, who spoke with PANYNJ officials, said. “The nature of freight has changed dramatically in a short period of time. They’re trying to figure out how to handle freight as it hits their own facilities.”

Political and financial pressures to offload its properties have dwindled, too. In 2018, then-Gov. Andrew Cuomo called for moving the container terminal to the city-owned South Brooklyn Marine Terminal in Sunset Park to make way for an extension of the subway. But Cuomo’s resignation three years later removed the most powerful actor demanding changes.

Around the same period, a Port Authority board member, Kenneth Lipper, advocated for the sale of waterfront properties to fund the overhaul of its dilapidated Midtown bus terminal. But after Lipper left, Port Authority leaders instead decided to sell the air rights of four Midtown towers for $3 billion, which is supposed to go toward the bus terminal’s redevelopment.

City and state leaders have instead focused on maximizing Brooklyn’s marine terminals and its surrounding streets as a distribution hub for the rest of the city. Mayor Eric Adams has also sought to convert the South Brooklyn Marine Terminal into an offshore wind hub, although he has said little about the Port Authority’s properties north of there.

“This industrial business zone has long supported manufacturing and tens of thousands of jobs, and now supports more advanced freight, maritime, and a soon-to-come offshore wind industry,” Candace Jones, a spokeswoman with the New York City Economic Development Corporation, said in a statement. “We see this section of Southwest Brooklyn as home to thousands of green jobs in the future and helping the city significantly reduce its dependence on trucks.”

Other stakeholders want modest transportation upgrades for South Brooklyn’s waterfront after more ambitious plans fizzled. U.S. Rep. Jerrold Nadler’s vision of a cross-harbor rail tunnel bringing freight to the Brooklyn waterfront has been decades in the making, for instance, and could be decades more in its execution. Cuomo’s proposal to extend the 1 train to Red Hook never gained traction. And Mayor Bill de Blasio’s dream to build a waterfront streetcar isn’t a priority of his successor.

Instead, community advocates want better regulation of trucks and repairs to roadbeds to handle the increased truck traffic, plus the eventual removal or replacement of crumbling sections of the Brooklyn-Queens Expressway. Real estate leaders have floated a new ferry route between Sunset Park and Red Hook to connect workers to jobs at Industry City or on the piers.

“Unlocking a ferry system to that workforce would be tremendous,” CBRE’s Cohen said. “All these waterfront areas are challenged for transportation, and a lot of companies are taking matters into their own hands by running shuttles to get their employees to office buildings.”

Regina Myer, president of the Downtown Brooklyn Partnership, wants to see greater access for open space between the Brooklyn and Manhattan bridges and plans like decking sections of the highway or creating a tunnel studied further. She has also asked the Metropolitan Transportation Authority to add a bus route connecting Red Hook to Manhattan through the Brooklyn-Battery Tunnel.

“You can’t get on a public bus and get to Manhattan through the Battery,” Myer said. “There has to be an efficient way to use that phenomenal resource to give Red Hook residents better access to jobs, and a bus would be a great deal less expensive than the 1 train.”

One factor keeping the South Brooklyn waterfront from becoming a neighborhood of luxury rentals is the lessons absorbed from the devastation that Superstorm Sandy wrought a decade ago. The storm surge ravaged 69,000 homes along the coastline, costing the city $19 billion in damages.

“From a storm surge point of view that’s stupid, and frankly it ends up walling off the waterfront, which is not unlike what we’ve seen in Williamsburg,” said state Assemblywoman Jo Anne Simon, whose Brooklyn district includes some of the area. “The feeling you get driving down Kent Avenue is very hemmed in, and Columbia Street would be in danger of that.”