'There’s going to be one last vibration, one last trigger, and the last bolt holding that thing together will break and the thing will fall.' 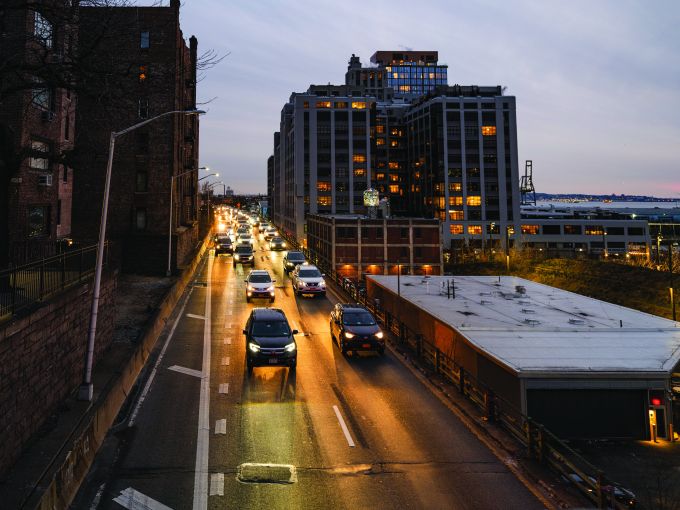 The Brooklyn-Queens Expressway might be one of the most loathed highways in the Northeast but the city has a once-in-a-generation opportunity to fix it.

Residents from Astoria, Queens, to Carroll Gardens, Brooklyn, still shake their fists at Robert Moses, the city’s all-powerful parks commissioner and bridge authority chairman, who bulldozed their communities and walled off neighborhoods in the 1940s to erect an 11-mile elevated highway shuttling tens of thousands of vehicles between the boroughs.

Moses died in 1981, and his legacy as a master builder has long been discredited in the public eye. Now the infrastructure projects he built are starting to break down too.

Engineers found segments of the highway’s concrete triple cantilever — an unusual design feat for a roadway — cracking in multiple areas in Brooklyn Heights and exposing rebar to corrosion.

Much of the disintegration is from overuse. The six-lane span, which is Brooklyn’s only interstate highway, was designed to handle 47,000 vehicles per day. But 153,000 vehicles are driving through the stretch of highway each day, including 1,100 trucks per hour. Freezing temperatures and salt treatments that have abraded concrete hasn’t helped. But the worst culprits are overweight trucks, whose vibrations while they slam through the cantilever have busted bolts and created fissures so large that sunlight can seep through.

“It’s the dynamic that comes about with heavy vehicles and trucks that creates vibration; it’s the vibration and deterioration over time that creates the problems,” said Trent Lethco, principal with Arup’s New York-based Integrated Planning team who has studied the BQE. “It’s aging, and because of its age, the strength and reliability of the structure is diminished in certain sections.”

Over the past decade, the state under Gov. Andrew Cuomo’s rule went on an infrastructure spending spree to upgrade deteriorating highways, bridges and transportation hubs. The Port Authority of New York and New Jersey has been rehabilitating John F. Kennedy Airport’s and LaGuardia Airport’s aging terminals and is renovating its crumbling bus terminal. The Metropolitan Transportation Authority completed an extension of the Second Avenue subway line after eight years. Moynihan Train Hall opened to the public last January. And the state Department of Transportation replaced a number of derelict overpasses, including the Kosciuszko Bridge, the Goethals Bridge and the Tappan Zee Bridge, the last of which Cuomo renamed after his late father, Mario Cuomo.

The BQE, however, got little attention from the Cuomo administration.

Perhaps it’s because the road has been a political orphan. Federal and state leaders have jurisdiction over the interstate highway, and the city and state share responsibility for its operation — but the state has deferred its maintenance and long-term use to city leaders.

“What you need is for the mayor and the governor to appoint high-level people to figure this out,” Ken Fisher, a former Brooklyn Heights city councilmember now in the business law department at Cozen O’Connor. “It’s going to take high-level cooperation between mayor and governor, and at the moment not only are those discussions not going on, but it’s not entirely clear who within the executive chamber or City Hall would be pushing for this to move up on the priority list.”

Mayor Bill de Blasio appointed a committee that sought ideas for the BQE’s eventual replacement for several years but the hearings were so contentious that the city scrapped long-term plans for the cantilever’s replacement four months before he left office, and instead announced a patchwork repair program. The freeway wasn’t mentioned in Gov. Kathy Hochul’s January State of the State address, which instead highlighted a new “Interborough Express” train route running through Brooklyn and Queens along freight rail lines.

Mayor Eric Adams cited the expressway as a worthy recipient of federal aid once President Joe Biden signed the $1.2 billion infrastructure plan. The road will likely compete with other projects for these funds once they are allocated. “We need to look at the BQE that is eroding. We know it’s almost at a dangerous state,” Adams said in November 2021.

City and state leaders must treat the span as an imperative that must be fixed before there is a collapse, infrastructure experts warn.

“It’s almost like you can see every mayor and governor, say ‘Why do I have to do this?’ As a steward of the public you have an obligation to step in and not let catastrophe occur,” said Barry LePatner, a construction consultant and founder of law firm LePatner. “By definition it’s definitely going to collapse. There’s going to be one last vibration, one last trigger, and the last bolt holding that thing together will break and the thing will fall.”

The de Blasio administration had hoped to reach a long-term solution to the BQE but its lofty plans didn’t pass muster with neighborhood residents.

In 2018, then-city Department of Transportation Commissioner Polly Trottenberg — now the deputy U.S. transportation secretary — proposed building a temporary six-lane highway through a section of the Brooklyn Heights promenade while the cantilever could be replaced. The $3 billion plan would have closed the promenade for six years.

But Brooklyn Heights residents lambasted the idea at town halls and the proposal was scrapped.

Instead, city transportation leaders took a number of steps before de Blasio left office to shore up the highway and extend its life for the next 19 years. The city DOT reduced a lane of traffic in each direction between Atlantic Avenue and the Brooklyn Bridge; fined overweight trucks and beefed up enforcement to prevent tractor trailers from driving over the cantilever; and installed sensors to monitor the structure’s stability. At the same time, city contractors would continue waterproofing the structure as well as repairing concrete and rebar on the Hick Street retaining wall, and replacing gutters and its drainage system.

“We approached it as a very real and immediate concern in terms of safety,” former NYC Transportation Commissioner Hank Gutman said. “We implemented a plan to do serious repairs where we knew there was structural damage. If we do all these things we could extend its life safely for another 20 years.”

Some heavy trucks are bypassing the cantilever and vehicles now have a breakdown lane on the span as a result, but traffic still regularly gums up between Atlantic Avenue and the Manhattan Bridge. Gutman blames the lack of tolls on Manhattan’s free bridges, which incentivizes drivers to bypass the tolled Battery Tunnel and drive through the BQE.

“When congestion pricing catches up, then the two-lane configuration gets better,” Gutman said, referring to plans to charge most motorists to enter central Manhattan.

Engineers say that without the measures the city is taking to patch up fissures and divert trucks, the corridor would have been unsafe in as little as five to 10 years.

“The changes are all intended to postpone that date by a couple of decades but everyone recognizes the triple cantilever is nearing the end of its functional life,” Lethco said. “At some point it will need to be replaced.”

The future of the BQE is now the Adams administration’s responsibility and city leaders have several ideas about what to do about it.

Adams said he “loved the concept” of a proposal to deck the highway in certain areas and build new park space that former Brooklyn Deputy Borough President Diana Reyna has promoted.

His likely Economic Development Corporation head, Carlo Scissura, told the Brooklyn Chamber of Commerce the expressway should be torn down entirely. He would substitute the elevated section of highway on Third Avenue with an underground tunnel connecting drivers to the Brooklyn-Battery Tunnel, officially the Hugh L. Carey Tunnel, and tap federal dollars for the project.

“The BQE is dangerous, rusted and polluted, and our communities and our city deserve better,” said Scissura, currently president and CEO of the New York Building Congress. “It’s time to start from square one, tear down the BQE, and design a future-thinking, environmentally conscious and resilient system that safely moves people through this corridor in a way that doesn’t continue its harmful legacy of dividing neighborhoods and leaving New Yorkers to live under its ugly shadow.”

No announcements have been made yet but city DOT leaders have informally reached out to Brooklyn elected officials concerning initial briefings on the project.

“This doesn’t seem like something the administration wants to punt,” said Lincoln Restler, who represents Brooklyn Heights, Williamsburg and Greenpoint on the City Council. “We need to put our foot on the gas right now to initiate dynamic community planning to identify transportation needs going forward.”

Brooklyn Borough President Antonio Reynoso wants the Adams administration to relaunch a community engagement process for all communities affected by the interstate highway in order to reimagine its use over the rest of the century.

“I’m going to make Borough Hall the central location for these meetings to take place so we can have a conversation about the  entire corridor and not just in one neighborhood,” Reynoso said. “I think that this city should be moving away from highways.”

The city can expect to hear from a variety of stakeholders who have a range of ideas for how to replace the span.

Real Estate Board of New York President James Whelan wants to convert the half-mile cantilever portion into a subterranean road similar to what Boston officials achieved with the Big Dig, a 7.8-mile network that bored through the heart of the city, and replaced belching surface highways that divided the Massachusetts capital.

“If you go to the Big Dig in Boston, the negative was that it took a lot of time. So if you’re going to try a similar idea with the BQE, it really needs to be well-planned-out,” Whelan said. “But the positive is that it has had a terrific positive impact in knitting together different neighborhoods of the city that previously were seen as disparate areas.”

Some transportation advocates favor removing the cantilever and installing a boulevard with fewer lanes while continuing to limit tractor trailers. The slope below the Brooklyn Heights promenade could be filled in with a land mass seeded with trees and linked to Brooklyn Bridge Park with staircases and ramps.

“Boulevarding is less expensive than a Big Dig-style project since this is on bedrock and next to the water so it’s difficult from an engineering perspective,” said Felicia Park-Rogers, director of regional infrastructure projects at the Tri-State Transportation Campaign. “You’d have to do it in conjunction with the community in a way that respects the area and doesn’t overwhelm streets with traffic.”

Any town hall meeting or proposal request is bound to jumpstart discussions about what to do about trucking and freight transport. This month, Gov. Hochul requested that the Port Authority conduct an environmental review of a freight rail tunnel between Brooklyn and New Jersey, a project U.S. Rep. Jerrold Nadler of Manhattan has pushed for years.

The project would likely cost billions, but removing thousands of trucks from city roadways could one day make an interstate highway obsolete.

“The city needs to rethink trucking, freight and e-commerce in its entirety,” said Rachel Weinberger, senior fellow for transportation at the Regional Plan Association. “We have a 1950s approach to freight. We’ve seen an increase in freight during the pandemic, and we assume that’s how it has to be, but we need to think more creatively of the right policies.”