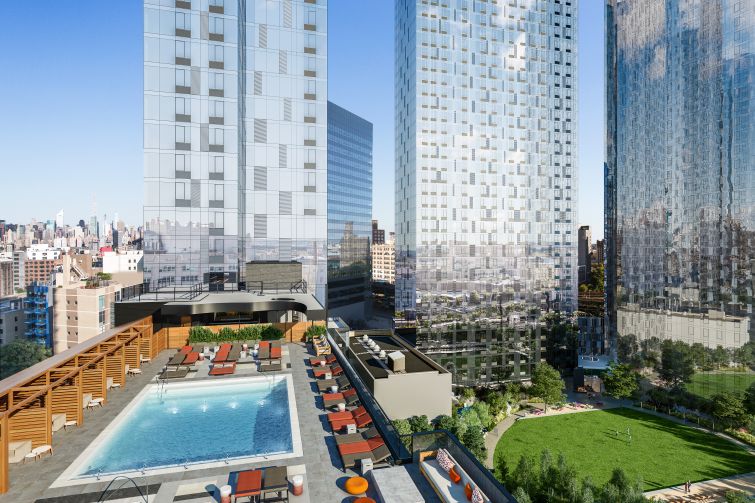 A tenant of a Tishman Speyer-owned building in Long Island City, Queens, claims the firm dodged rent-stabilization requirements tied to the 421a tax benefit it received for the development by hiking rents far above state regulations.

The lawsuit, launched by the watchdog group Housing Rights Initiative and one current tenant, was class certified by a New York State Supreme Court judge on Sept. 19. The suit alleges Tishman Speyer skirted the rent stabilization laws in Jackson Park, an 1,800-unit development at 28-10 Jackson Avenue, for which Tishman Speyer received up to $20 million in tax breaks, according to the plaintiff’s attorneys.

The tenant in the building claims he saw a rent increase of 58 percent from 2021 to 2022, despite the 421a status of the building capping annual hikes at 1.5 percent, court records show. So far there is only one person represented in the suit.

Tishman Speyer allegedly skirted the rent limit by not leasing the apartments to the residents, but by instead giving them contracts as licensees, essentially making them Tishman Speyer’s “roommates,” according to Roger Sachar and Lucas Ferrara of the Newman Ferrara law firm, who are representing the tenants.

However, Tishman Speyer claimed the rent increases were legal because tenants in the building were given a month’s free rent during the pandemic and the renewals accounted for the loss of the concession. The landlord’s lawyers argued there’s precedents set in three other cases that mean they’ll win the case, a memorandum of law filed by Tishman Speyer’s attorneys said.

“This was a routine procedural ruling on class-action status, not a decision on the merits of the case,” a Tishman Speyer spokesperson said in a statement. “We have consistently followed all New York regulations in setting rental rates at Jackson Park. We stand by our decision to grant limited, one-time rent concessions during the height of the pandemic.”

Considering the nature of the tax abatement, the suit could open up Tishman Speyer to a government inquiry, but the firm’s actions are not necessarily illegal, the tenant lawyers said

“It certainly suggests fraud, because it’s not a licensed situation, right?” Sachar said. “So it may not be illegal from a criminal perspective, but it’s certainly inaccurate and suggests fraud.”

The Housing Rights Initiative believes at least 3,000 former and current residents qualify for the class in the suit and could receive reimbursement or rent reductions, as well as corrected contracts if the plaintiffs come out ahead in court.

The building in the lawsuit is part of the three-building development known as Jackson Park, along the northern edge of Sunnyside Yards. Construction began in 2016 in the rapidly changing section of Queens. Jackson Park was refinanced in 2019 with a $1 billion loan from Bank of America and Wells Fargo to shore up construction debt.

Tishman Speyer has been hard at work developing the immediate area as well.

The developer also built The Jacx, a 26-story tower at 28-07 Jackson Avenue with 1.2 million square feet of office space that was refinanced with a​​ $425 million loan from Bank of America in August 2021, CO reported at the time.