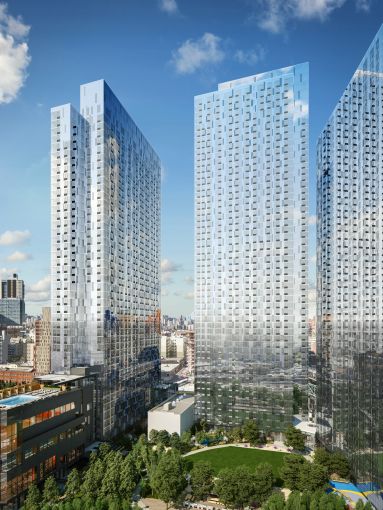 Tishman Speyer has nabbed $1 billion from Bank of America and Wells Fargo to refinance previous construction debt on its three-tower residential development, Jackson Park, in Long Island City, Queens, according to an announcement today by Tishman.

A JLL team of Michael Tepedino, Michael Gigliotti and Geoff Goldstein arranged the transaction on behalf of Tishman.

Tishman began construction on the property—with its three towers at 28-40, 28-30 and 28-10 Jackson Avenue—in 2015, later opening the development in phases starting last year. Its 1,871 units are spread throughout three glass towers. The complex—designed by Hill West Architects—also sports a private, 1.5-acre park and a five-story, 50,000-square-foot resident clubhouse, which includes full-size basketball and volleyball courts, a fitness center, a yoga and group fitness studio, a 75-foot indoor lap pool and a steam room and sauna, among many other offerings.

The project has a combined 120,000 square feet of indoor and outdoor amenities, including a dog park, a bocce court, a children’s playground, an outdoor gaming lounge with a fireplace, a sundeck and a pool and a hot tub with cabanas, according to the property’s website.

Monthly rents at the complex range from $2,635 for studios to $6,400 for three-bedrooms, according to the property’s website. It is nearly fully leased, according to Tishman’s announcement.

Tishman has come to dominate LIC, specifically Jackson Avenue. It’s in the process of opening its creative office development, The JACX, which sports two 26-story towers comprising 1.2 million square feet at 28-07 Jackson Avenue. At the base of the two towers is a four-story “podium,” which includes 50,000 square feet of street-level retail space and a 388-space parking garage, according to its website.

The firm began construction on The JACX near the end of 2016, topping out the development at 446 feet in October 2018. In January, Tishman announced that it had fully leased The JACX months before its expected opening.

Representatives for Bank of America and Wells Fargo did not immediately respond to inquiries.