Real Estate Attorney Terri Adler on the Problem With Limits

Duval & Stachenfeld managing partner, who's worked with some of New York's biggest real estate names, came from out West to launch a career in Gotham 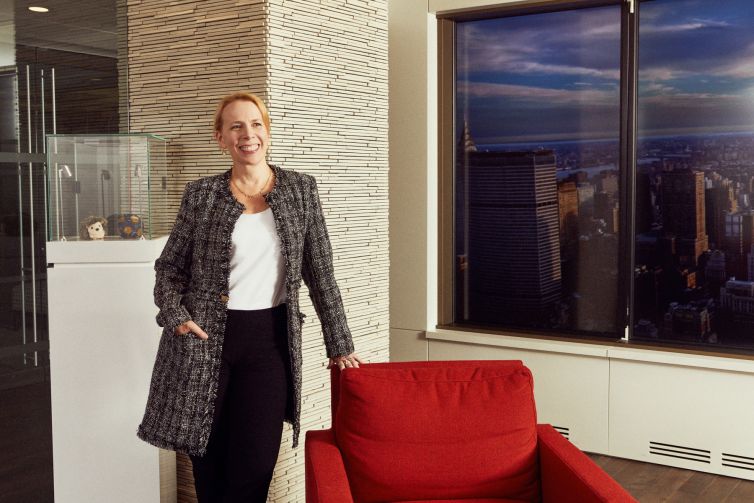 Bruce Stachenfeld did not want to do the interview. He was busy, and he would not be working directly with the new recruit anyway. However, a fellow partner at the law firm insisted. So Stachenfeld poked his head into the room where sat a recent New York Law School graduate from out West named Terri Adler.

“Can you type?” Stachenfeld asked her.

Stachenfeld ducked out of the room — he hadn’t sat down — and Adler got the job. Within a year of that 1996 meeting, she, Stachenfeld and a colleague named Patrick Duval would start their own firm, Duval & Stachenfeld, which will mark its 25th anniversary on Oct. 7. Adler has been the managing partner since August 2018, running the day-to-day of the Manhattan-based real estate law firm with about 50 attorneys.

She has, over the course of the firm’s quarter century, worked on some of its — and New York’s — most prominent real estate deals. She and the firm do transactional work across all asset classes and rungs on the capital stack, feeding on a mix of return business and referrals from regular clients as well as networking.

The transactional work included the 2010 purchase by Angelo Gordon and Extell Development of Carlton House, a hotel and apartment building at 680 Madison Avenue. It went for $170 million in an especially complex transaction, complete with a ground lease in a landmarked district and a unionized hotel workforce, that is indicative of Adler’s approach and why investors retain her.

She prepped the offer from Angelo Gordon and Extell, which involved later selling the building’s retail portion to Thor Equities. That, in turn, removed a lot of the onus of the ground lease and left the buyers to convert the hotel portion to condos. Adler got it done in under a week. This was in a post-Great Recession era, too, of lots of competition and few deals.

“It was probably as complicated a deal as you can get in New York City,” said Adam Schwartz, Angelo Gordon’s co-CEO and co-CIO. Adler’s ability to work through the minutiae quickly to achieve a successful result showcased her skills, he said. “She’s practical, which is not always the case with lawyers.”

Along with Angelo Gordon — which she worked with on the acquisition and later sale of Chelsea Market — Adler’s clients include, or have included, Silverstein Properties, the Feil Organization, Ladder Capital, the Lightstone Group, Blackstone’s EQ Office, the Abu Dhabi Investment Authority, NorthStar Realty Finance Corporation and RXR.

In fact, Adler advised NorthStar (now Colony Capital) in its $340 million investment in RXR in 2013, a deal that involved combining corporate debt, preferred equity and common stock. It was one of the biggest such deals in New York at the time, and gave NorthStar a 30 percent stake in RXR.

Adler, too, was one of the first New York real estate attorneys to jump into the opportunity zone space in a sizable way. After the 2017 federal tax changes that birthed OZs, she led her firm’s creation of the legal framework for what it calls the first sponsor capital fund solely targeting OZ investments.

With Adler’s prominence has come a trove of recognitions and awards, including inclusion on Commercial Observer’s Power 100 (along with Stachenfeld) several years ago and on list after list of New York City’s most prominent property attorneys.

“The core of a lot of the stuff that I work on is there is usually a complexity and a need for clarity and speed; time kills deals,” Adler, 55, said during an early August interview over Zoom from her office at 555 Madison Avenue. “When it’s very complex, what I think happens a lot of times is you get stuck in the weeds and it becomes like a grind, and you get all of this deal friction.”

She grew up in California and Utah, mostly in the Salt Lake City area, where her meteorologist father worked for the National Oceanic Atmospheric Administration and the National Weather Service after serving in the Navy. Adler said she realized early on that any success lay beyond her surroundings — the family’s home was in a master-planned community in a former cow pasture — and she cast her die after earning an English degree at the University of Utah with a minor in German (nein, sie spricht kein deutsch).

“I was, like, literature professor or law school,” Adler said.

The family of Adler’s boyfriend at the time lived in Matawan in Northern New Jersey. East she went, using Matawan as a home base to attend New York Law School in Manhattan while also sharing an apartment in Murray Hill. She earned her degree at night and worked in an entertainment law firm by day (and had worked for criminal defense attorneys in Utah, too).

Adler joined what was then Shapiro Shapses Block & Stachenfeld after that 1996 interview with the last name on the shingle. It was Stachenfeld, though, who steered work her way — and who, with Adler and Patrick Duval, founded Duval & Stachenfeld in October 1997. It had maybe two major clients and a handful of attorneys.

That was fine for Adler. Her continental journey to Manhattan’s concrete valleys, never mind her status as a younger woman in a field that older men dominated, drove her.

“I don’t like limitations, let’s put it that way,” she said. “If my skill set enables me to do something that’s beyond what a first-year should do, I want to be able to do it. So I felt like I would do better in a smaller environment.”

The gender imbalance, too, imparted a lesson to Adler, the married mother of two teenagers, that she said she tries to impart to women she mentors: that of no apologies for hard work and ambition.

“Society hasn’t caught up with the aspirations of most women,” she said. “That means that while we’re in these great careers we still get questions about: ‘Don’t you miss your kids?’ ‘How do you work so much with your family?’ No one says that to men for the most part.”

Adler’s advice, then, is simple. “Dispense with the guilt, dispense with the pressures. Because I think that’s what pushes a lot of women out of, sort of, the game, if you will. I think as women we need to give ourselves a break.”

That rare combination of morning person and night owl, Adler’s business grew with her new firm as it got its sea legs in the late 1990s.

“We were kind of lucky — though I’m sure it didn’t seem that way at the time — in that we had extraordinary deal flow,” Stachenfeld said. “So Terri had the opportunity to rise.”

As for the tougher times — like now — when the real estate industry’s cup does not overfloweth with deals? A recent report from brokerage Newmark cited $190.3 billion in U.S. commercial real estate investment in the second quarter of 2022. Most of that, though, was in multifamily and industrial properties.

Macroeconomic anxiety surrounding inflation, interest rates, changing work trends and geopolitics — and just plain domestic politics — have investors shying away from assets such as office and hospitality. Even investment in the vaunted life sciences sector, riding high amid the pandemic’s lows, has started to taper.  Nationwide investment activity in that sector was off nearly 34 percent annually in the first half of 2022, according to another Newmark report.

No matter. There’s a deeper strategy, Adler and Stachenfeld said. Both point to the cultivation of their attorneys’ careers regardless of the larger business climate. Both also emphasize their firm’s pure-play focus on commercial real estate. They focus on that one thing as much as possible, in good times and bad. In bad, that can mean reducing a client’s exposure to dicier assets, Adler said. In good times, it can mean any number of approaches.

It would be nice if Adler and the firm she manages didn’t have to pivot, though.

“Twenty-seven years of doing this,” Adler said, “and, I’m, like, ‘Can we just have four years of nothing happening?’”