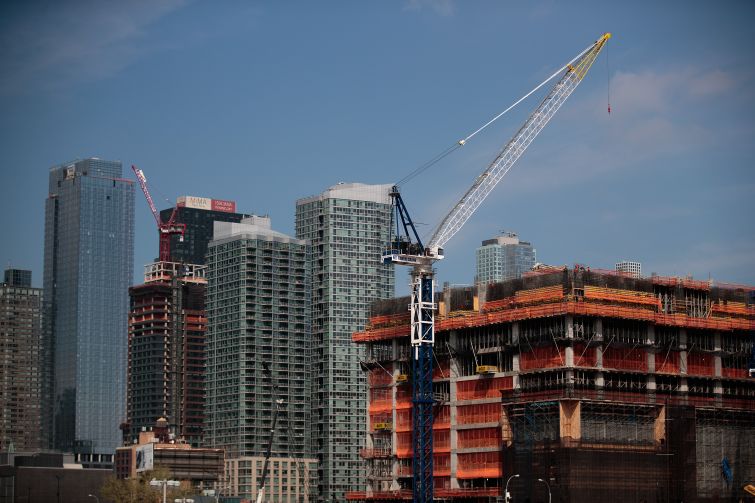 A view of a new residential building under construction in the Hudson Yards development. Photo: Drew Angerer/Getty Images

The Real Estate Board of New York (REBNY) is urging Albany lawmakers to act on what it says is the need for 560,000 new housing units in New York City as the population is expected to hit 9 million by 2030, something that has not escaped the attention of city officials since a similar New York University study came out in 2016.

AKRF, an environmental, planning and engineering consulting firm, and REBNY released their own study this week, however, that highlights the progress — or lack thereof — the city has made in meeting this need. Projects currently in the pipeline only meet about 14 percent of this demand.

REBNY is calling on Gov. Kathy Hochul to kick a building boom into high gear while also praising proposals made in her 2022 State of the State address in early January to invest $25 billion in either building or preserving 100,000 units of housing for low-income New Yorkers.

“This report underscores the critical need to produce more rental housing and dire consequences our city will face if Albany fails to act,” REBNY President James Whelan said. “We are encouraged by Gov. Hochul’s proposals, which set out a clear path to help address the housing crisis, and look forward to a robust conversation on affordability and urgent need to build. By working together with the private sector, our leaders in government can help make sure New York City is an affordable place to live for everyone.”

Hochul’s office did not respond to a request for comment.

With about 79,500 units currently in the development pipeline, REBNY claims there is an incremental need for over 485,000 units by 2030.

In 2018, NYU’s Furman Center for Real Estate and Urban Policy followed up on its 2016 study with another one led by former de Blasio appointee Vicki Been — who was doing a stint in academia at the time, showing a 24 percent drop in the number of apartments allocated for low-income New Yorkers.

When asked by WNYC’s Brian Lehrer in a May 2018 appearance, then-Mayor Bill de Blasio seemed to suggest that the supply and demand effects of capitalism on the housing market meant the problem would sort itself out. City Hall, however, would monitor and guide the process considering the impending population boom.

“The bottom line here is it’s not shocking that in the free-enterprise system the development would follow where the money is,” de Blasio said in the interview. “If the money is in the smaller apartments, that’s what the developer is going to do. I don’t like that, but I understand the free-enterprise system. Our job is to counter that and balance that in every way we can. So we have an affordable housing plan to build and preserve in place 300,000 apartments. That’s enough for almost three-quarters of a million people, so they can live affordably in New York City.”

De Blasio’s successor is also focused on the rapid production and preservation of affordable housing.

“The mayor and the administration are laser-focused on creating the affordable housing New York needs,” Charles Lutvak, a spokesperson for New York Mayor Eric Adams, told Commercial Observer. “We will continue working across agencies and with partners in and out of government to deliver for New Yorkers.”

REBNY also believes there is a current demand for 227,000 new homes right now, which it says would help attract and retain workers, giving them a life within reasonable proximity to workplaces.

Of those 227,000 units, REBNY said 50,000 of them are specifically needed to replace unsafe housing that may have dangerous occupancies that do not comply with safety ordinances. Another 16,000 of those would simply be making up for an increase in homelessness since 2000.