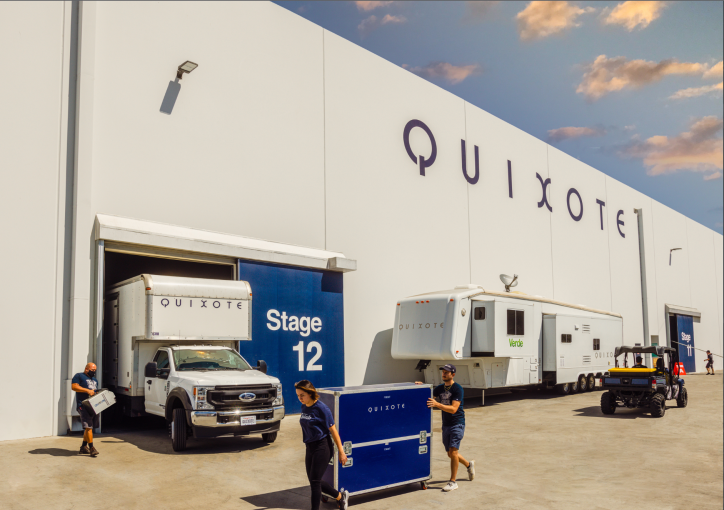 Quixote was founded in 1995 and has grown its business with 325 employees in Los Angeles, New York, Atlanta and New Orleans. Quixote Studios

Most Angelenos are familiar with seeing big white “Q U I X O T E” trucks and trailers around town, serving on-location film shoots for the entertainment industry. But now those trucks could have a different name emblazoned across their sides.

Hudson Pacific Properties (HPP), one of the most prominent landlords for filming and content creation space, announced Thursday that it has acquired Quixote Studios, a company that provides soundstages and production services for the entertainment industry. The deal was valued at $360 million.

Quixote was founded in 1995 and has grown its business with 325 employees in Los Angeles, New York, Atlanta and New Orleans. The company rents out 23 soundstages and more than 500 cast trailers and trucks, and it has one of the industry’s largest inventories of grip and lighting and production equipment. Its clients include ABC, Disney, HBO, Apple Sony, Paramount, NBC Universal and Warner Bros., and the company has served several blockbuster movies and hit shows from “Curb Your Enthusiasm” to Marvel’s “Avengers: Infinity War.”

“Our acquisition of Quixote Studios represents further execution of our strategy to enhance our core studio business for customers with a full-service offering of soundstages, both in terms of size and location, and production services in key global markets,” HPP’s Jeff Stotland said in a prepared statement. “Quixote strengthens our reach to capture strong secular demand for studio and related assets, including excess demand at our Sunset Studios locations, and enables us to achieve immediate economies of scale while further diversifying our client base.”

HPP financed the acquisition with $200 million from its credit facility plus $160 million in deferred purchase pricing accruing interest at a 5 percent rate interest-only, due December 2023. The deal bolsters HPP’s operation, similar to Hackman Capital Partners’ acquisition of MBS Group and its ​​film and TV studios and a production services platform in 2019.

“Hudson Pacific and Quixote’s shared purpose is to elevate the production experience for crews on our collective stages as well as on location in the major global production markets,” Quixote’s co-founder Mikel Elliott said. “Together, we will further innovate, inspire and solve new production challenges in the era of streaming content and beyond.”