Financing Construction Projects Gets That Much Harder

Traditional lenders are still active, but more builders might find themselves turning to alternative sources 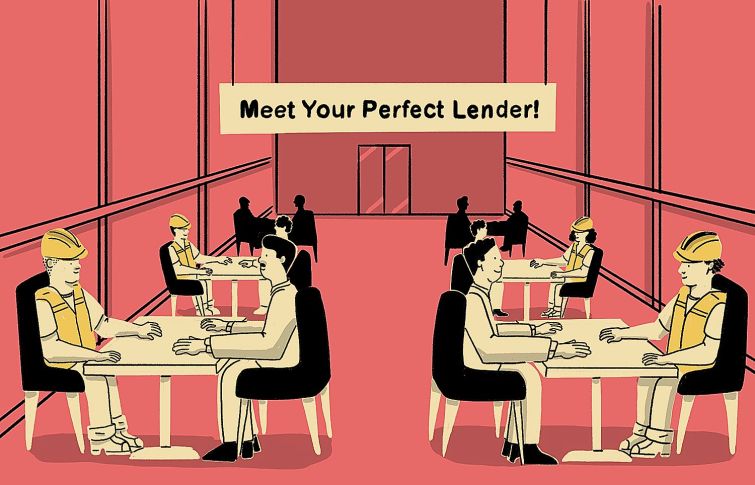 It hasn’t been as easy to put cranes up recently amid market volatility and economic uncertainty as lenders that finance development projects take a harder look at where they park their dollars.

“Traditional lenders have become far more risk averse and are being very cautious,” said Nitin Chexal, CEO of Palladius, a private equity firm and lender. However, the demand for development dollars is still strong.

It’s true that some traditional commercial real estate lenders have pulled back slightly from construction lending or taken a more conservative approach to projects that reach their credit committees, creating a window for alternative lenders to step into the ring. Yet some banks aren’t slowing their roll.

“The market was even more aggressive than last year,” said George Doerre, senior vice president and team leader of commercial real estate at M&T Bank. “There is an open and active market for construction lending.”

Still, in this year’s second quarter, banks issued $20.6 billion of securities backed by real estate loans, down from $29 billion in the first quarter, according to a report from Trepp.

Lenders’ appetite, of course, is highly dependent on the assets they desire in their loan portfolios. Office and retail still give some financiers pause, while multifamily continues to tick a lot of boxes post-pandemic as rental housing demand continues its upward swing.

Roughly 420,000 new rental units will come online nationwide by the end of the year, according to a report from RentCafe and Yardi Matrix, with more expected to be built in New York City than in any other city.

But, generally, banks have started decreasing their lending activities and their exposure to New York specifically, according to Ran Eliasaf, founder and managing partner at Northwind Group. The expiration of the 421a affordable housing development incentive in mid-June is on the minds of many lenders in the city, especially as a  replacement program remains uncertain.

As a member of the Federal Home Loan Bank of New York Affordable Housing Program, M&T Bank earlier this year supported applications for 17 affordable housing projects and provided $15 million in grants to fund the construction and rehabilitation of 1,120 affordable housing units across New Jersey, New York, Pennsylvania and Maryland. “It’s such a great program because you’re creating something from nothing,” Doerre added. “It’s been great for the market-rate and affordable tenants. It also created jobs.”

The absence of a more receptive environment from traditional lending sources means more construction projects are turning to private financing.

“It’s not that all the banks won’t finance construction projects, but you’ll see more private debt funds providing that capital right now,” said Eliasaf. “You will have a debt fund either providing the full solution or coming in as a mezzanine lender to bridge the gap of capital that the banks can’t provide.”

When banks step back, private lenders can fill a void and cater to the strong demand, although not all of the demand.

“We see it as an opportunity where nobody else is playing,” said Mark Fogel, CEO and president of Acres Capital. “We’re happy about this market in a way and that there are not so many lenders out there right now, because we can get very choosy about what we do and pick the best of the best [lending opportunities].”

Acres Capital recently financed the acquisition and renovation of Park 53, an office building at 45 East 53rd Street in Midtown Manhattan’s Plaza District. “We’re big believers in the Park Avenue corridor for Class A space,” said Fogel. “We have some lower-class B and C buildings in Chicago and other places, and it’s not doing well at all. The trend we’re seeing is people are buying those really cheap [office properties] and doing adaptive reuse and renovation.”

Acore Capital recently provided a $127.5 million debt package to refinance a 52-year-old office tower in Lower Manhattan, along with construction loans for office development in both Florida and Texas. But “we’re going to see a slowing down of demand for office,” said Warren de Haan, Acore’s co-chief executive officer.

“Lenders are being more selective across all product types,” de Haan said. “The majority of our business is transitional assets. We see about the same amount of inquiry for both construction and for renovation projects.”

“Office has been a slightly disfavored asset class by lenders overall due to some uncertainties,” M&T’s Doerre said. “The trouble with offices is that it’s often a tale of two stories. … As a result, we have a pretty full pipeline of opportunities, very much tilted towards multifamily.”

That inclination may tell a broader market story as a slow and reluctant return-to-office has put a question mark over the viability of aging office stock. “We’re seeing a lot of office building owners and potential buyers of office buildings contemplating conversions to residential,” Eliasaf said.  “I think that’s going to be a substantial trend in the next year or two.”

Those same owners could have a tricky time finding capital, however, because the execution plans aren’t child’s play, according to Chexal: “There’s the low probability of success and [good] risk-adjusted returns.”

Rising interest rates mean that a construction loan is going to be more expensive than usual, a problem that’s permeating through the lending markets right now, with some borrowers unable to refinance their loans when existing debt matures. It’s safe to say that — as has been the case throughout the pandemic: there are the haves and have-nots when it comes to asset classes and the ways lenders will approach financing.

“We do a lot of bridge lending and short-term loans. So the question becomes, ‘Are they going to be able to refinance our loan if interest rates are too high?’” Fogel said when asked about the concerns he heard from investors. “The answer to that question for our borrowers [is] most of what we do is in multifamily, it’s still highly liquid, so it’s a safe place to be. We don’t see people walking away from multifamily so fast.”

“There’s a lot of equity out there. But getting the right type of debts at the right amount and, most importantly, at the right pricing? That’s what I think is the challenge right now,” said Eliasaf.

Aside from financing, the supply chain shortfall remains a big challenge for construction projects and — when coupled with rising interest rates — is making deals harder to pencil.

“Some developers don’t think as much about interest rates as they do about the cost of material and labor,” said Fogel. “The hard cost of construction is the expensive part.”

It’s not all doom and gloom, though.

“There’s been a certain amount of reshoring, a certain amount of domestic production flexibility,” Doerre said. He has seen savvy real estate investors and developers buying raw materials for projects they might not develop for five or 10 years, and building their own facades and curtain wall systems. “I think some of the macro supply chain runs are starting to ease.”