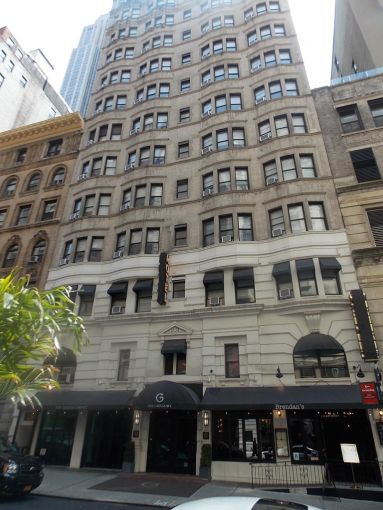 Brendan’s Bar & Grill sued the new owners of The Gregory Hotel in Midtown for allegedly evicting the restaurant before its lease expired, locking it out of its ground-floor space and stealing 150 bottles of wine in the process.

The owners of the eatery filed a lawsuit Monday in New York County Supreme Court against 42 W 35 Holding and Vlash Pepa, the manager of the entity that purchased the hotel at 42 West 35th Street in March. Brendan’s, which has been closed since the pandemic began, wants a judge to force Pepa to return the 5,000-square-foot restaurant space, cough up more than $6 million in damages and pay for the stolen goods.

Brendan’s has operated on the ground floor of the hotel since 2002, back when The Gregory was known as the Comfort Inn. It extended its deal in 2013 with the lodge’s previous owners, the Jeoport Hotel Group, to continue in the space until 2033, according to court records.

But when Pepa and his partner, Denis Xhari, picked up the hotel in May 2021 for just $33.9 million — a steep discount thanks to the property’s 2014 foreclosure — they told the eatery their lease was terminated in February, according to the lawsuit.

Brendan’s claimed that in the months after, a handful of people, including Pepa, entered the eatery, stole at least 150 bottles of wine and more than 60 bottles of liquor and tampered with the restaurant’s security cameras. Brendan Kelly, who owns the restaurant, filed a report with the New York City Police Department on March 25 after the group repeatedly cut off his padlocks on the grill’s entrances and replaced the locks with their own, according to the suit and a copy of a police report submitted into court records. Kelly and his staff have been locked out of the property since the end of March, according to the lawsuit.

It’s unclear whether the restaurant or The Gregory will reopen.

The suit is the latest in recent troubles for the 132-key hotel. Meadow Partners bought the spot in 2014 for $49.3 million from Jeoport and dropped $10 million to reposition it as a boutique hotel. It was forced to shutter in March 2020 — as the coronavirus pandemic spread through the city — and Meadow’s lender, AllianceBernstein, filed to foreclose on the property in May 2021, PincusCo reported. Meadow was also hit with a lawsuit from Related Companies in May for breaching the guarantee on its $15 million mezzanine loan, The Real Deal reported.