Proptech and Feds Take On Indoor Air Quality at Schools 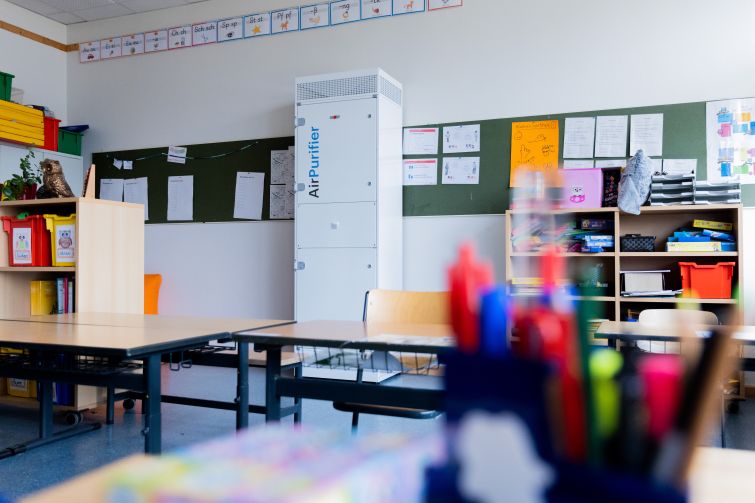 Since 2020, Congress has passed $189 billion in funding to address indoor air quality (IAQ) in elementary and high schools. Along with proptech innovations aimed at improving IAQ, schools have never had more funding and technological resources to combat air-borne diseases, including COVID-19 and triggers for asthma, and to promote a cleaner classroom environment.

So far, though, much of the money remains unspent due in part to indecision over what technologies to use and the decentralized nature of school decision-making in general in the U.S.

The government funding for IAQ upgrades in schools began with $13 billion from the 2020 Coronavirus Aid, Relief, and Economic Security (CARES) Act. An additional $54 billion was approved in December 2020 for schools’ use, and $122 billion for schools from the 2021 American Rescue Plan (ARP).

“The first two were part of the Cares Act and that was for basically directly addressing how negatively schools have been impacted by COVID-19,” said Ray Wu, CEO and co-founder of Wynd, a San Carlos, Calif.-based proptech startup that provides IAQ monitoring and improvement for commercial offices. “The American Recovery Plan — that’s part of the overall economic stimulus package — gave more money to schools. That’s the one often cited as being almost completely unspent: $122 billion for schools, 93 percent of which is unspent and needs to be either spent or at least allocated by September 2024.”

The avalanche of funding has provided schools with “a generational opportunity” to improve IAQ, said Wu.

“A lot of schools haven’t been retrofitted in a long time with respect to their environmental health and air quality,” he said. “The average school is 50 years old, so there’s tons of room for improvement. Most schools have not yet made improvements. There are some stats that say around 36,000 schools need to replace or update their HVAC systems, about 40 percent of public schools. Only 28 percent were using purifiers like those used in homes and increasingly in commercial spaces.”

While Wu sees schools increasingly desperate to use technology to make their IAQ safer, they are mostly using “point solutions” on the monitoring, purification and ventilation side. “The problem is [the devices] don’t really talk to each other and they are incredibly expensive. I wouldn’t say vendors took advantage of this kind of government funding as much as that the initial generation of products were not that smart.

“I think schools are not stupid. They want to find solutions that are relatively easy to swallow in terms of cost and maintenance. The other thing we learned is they don’t really want to fiddle with all these different products. They want something that ideally lessens their work and still keeps them healthy, reduces energy spending, and runs efficiently, but can still be funded by the grants. And [Wynd’s] angle is that we are offering the automation of the whole air system.”

While much of the federal IAQ for schools funding still lies dormant, a number of school districts are moving forward using science to improve indoor air quality, said Mark Hernandez, the S.J. Archuleta professor of civil and environmental engineering at the University of Colorado at Boulder and  director of its Environmental Engineering Microbiology and Disinfection Lab.

“Boulder Valley [School District, in Colorado], before COVID hit and that federal money became available, had a bond issue in which air quality was a big part of it,” Hernandez said. “They have buildings that have a wide age range and they wanted to improve the environment — not just air quality, but lighting, sunlight and global learning environment. Boulder Valley had taken that up on their own and part of it was air quality monitoring. That’s been about a six-year study.

“More recently, in response to the pandemic, Denver wanted to do the same thing. You can’t manage what you don’t measure, so measure it, see what’s normal, see what’s not, and put your priorities where the poorest-performing and least desirable learning environments are with respect to lighting and air quality,” Hernandez said. “They’ve leveraged that data wisely. Denver public schools, in particular, deployed hundreds of HEPA filters in their classrooms and actually looked before, during and after the deployment of the filters, leveraging that air quality data.”

A key to managing costs and quality in improving IAQ for schools is academic-school district partnerships, said Hernandez.

“We just finished installing 800 classroom monitors this summer,” Hernandez said of the Denver public school system. “We did it in eight weeks with teams of university students who went out, made a living wage, and installed them professionally. Now we have the dashboard, and the district can monitor the air quality in those classrooms. It’s not expensive and if the school districts team-up with universities, there’s no profiteering involved. You get these engineering students who know what they’re doing — high-quality installation, high-quality monitors — and it’s a win-win for the community.”

Back on the proptech front, Wynd automates IAQ monitoring through its new product, Symphony, which the company quietly started to pilot in the San Francisco Bay Area and in Washington State, said Wu.

“We’ve been rolling it out in several schools,” he said. “It basically uses data from comprehensive monitors that automate healthy classrooms and reduce energy spending. A lot of these schools are just turning everything up to the max, but not dialing it back down when it’s not necessary.”

Wu added that Symphony installation and use is relatively inexpensive. “On a basic site, it’s less than $1,000 a classroom monthly,” he said.

Hernandez agreed that using existing technology alone to monitor and mitigate IAQ should be cheap and easy, not only in schools, but in all public spaces.

“There are things that target biological agents — ultraviolet light, certain types of chemicals,” said Hernandez. “The issue is they’re harder to scale. With high-performance filtration, these are satellite units that you actually put in [select, individual] classrooms. Those are plug and play. They’re affordable. That technology has been around for more than 50 years out of NASA. We know it works. It’s just a matter of deploying it.

Hernandez said that while ultraviolet light works, it requires new infrastructure, including the bulbs themselves. “Air purifiers are much faster and cheaper,” he said. “There’s a new generation of these that have been designed and deployed. They’re quiet. You can adjust the speeds and they’re movable. They don’t take much more energy than a light bulb. So there’s a lot of upside to this new generation of essentially old filtration technology that makes it really easy and affordable.”

Hernandez called it “a fallacy” that improving IAQ in schools would prove to be too expensive.

“When we did the math on deploying these high-performance air filters in the monitoring systems, it’s about the cost of a textbook per kid per year. That’s all,” he said. “And I think we should be doing this at least for our kids, if not for the public, transportation hubs, and other things. We have a lot of choices to buy bottled water. We have no choice about the air. I think that this idea of systemic indoor air quality monitoring should be available to the public.”