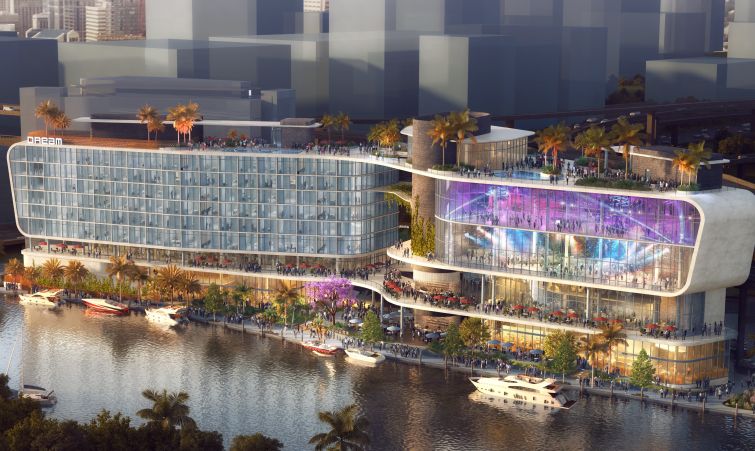 The Miami River district is slated for a makeover after voters approved a 50-year lease extension in Tuesday’s primary.

The voter-approved lease extension paves the way for the redevelopment of a waterfront site in Downtown Miami into a hospitality complex called the Riverside Wharf, which is estimated to cost $185 million.

Developers MV Real Estate Holdings and Driftwood Capital have proposed the construction of two 10-story buildings that together will feature a 165-room hotel run by the Dream Hotel Group, a 30,000-square-foot nightclub, a 12,000-square-foot event hall and another 16,000 square feet of space for restaurants.

The entertainment destination — located at 114 SW North River Drive, just north of the Brickell district — will also be the home to a “private marina capable of accommodating megayachts,” according to a spokesperson for the joint venture.

Since 2016, the developers have leased the 0.4-acre parcel from the City of Miami as part of a 30-year deal. In 2017, the popular, outdoor Wharf bar opened on the site.

Aiming to redevelop the land, in 2022, the developers sought to increase the length of the lease by 50 years and expand the square footage by about an acre, to control adjacent parcels. The extension was needed to secure financing, MV Real Estate’s Alex Mantecon told Axios earlier this month.

Besides the lengthened lease, the new terms, as spelled out on a ballot, up the private investment requirement from $7 million to $30 million and increases the rent by 50 percent or “fair market rent, if greater.” MV and Driftwood have been paying more than $200,000 a year in rent to the City, according to Axios.

The developers will also be required to construct a new seawall and a public riverwalk. They’ve previously said construction would begin in the second quarter of 2023.

A representative for the joint venture did not immediately respond to Commercial Observer’s request for comment following the ballot vote.