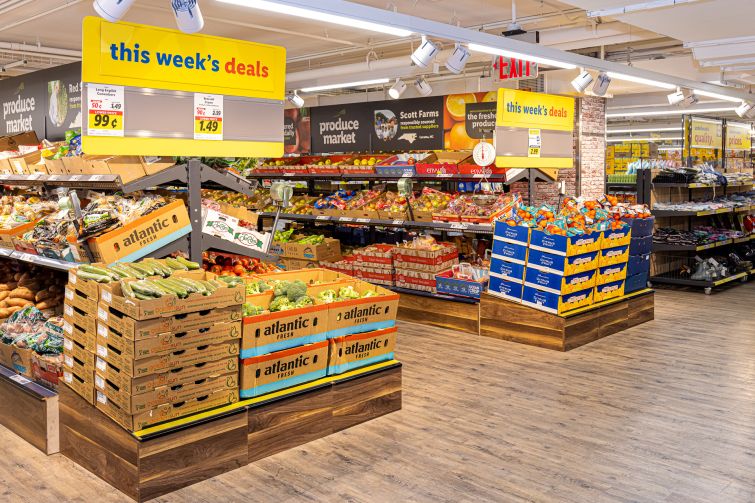 The interior of the South Harlem Lidl location. Photo: Lidl

Lidl has its sights set on more outer-borough locations after recently nabbing one in Queens, this time planning its first Brooklyn outpost in Park Slope.

The discount grocery store signed a 25,000-square-foot lease to move in at William Macklowe Company and Senlac Ridge Partners’ residential project at 120 Fifth Avenue upon the development’s completion in 2024. The landlords declined to provide the terms of the deal.

The developers have 180 units of residential mixed with 67,000 square feet of retail on tap for the property formerly occupied by Key Food, which closed in mid-2021 after locals spent years voicing concerns about the need for access to affordable housing and groceries in the neighborhood, DNAinfo previously reported.

“In the course of our close collaboration with local civic leaders, their top priority consistently has been to bring a community-oriented supermarket to the planned development to succeed the closed Key Food,” Billy Macklowe, CEO of William Macklowe Company, said in a statement. “That’s why we’re thrilled to be partnering with Lidl to deliver a new, full-scale supermarket that offers a broad range of quality groceries at affordable prices.”

“I think Lidl is the answer to what the community was distressed about. That phrase ‘value-add proposition,’ that’s what Lidl does.” Schuckman told Commercial Observer. “The way they’re differentiating themselves to other supermarkets is that they bring tremendous value to the table at extraordinary discounted prices.”

To help win over locals, the developers signed an agreement with civic organizations in 2017 to promise 41 units of affordable housing in the development, and said Lidl’s reputation for higher wages for employees and cheaper groceries keeps with the deal.

“The many appealing standard features of Lidl supermarkets, coupled with the lease requirements, fulfill and memorialize the conditions in the cooperation agreement,” Jay Marcus, director of real estate for local nonprofit the Fifth Avenue Committee that was part of the discussions, said in a statement. “Lidl, commendably, also has expressed eagerness to meet with community groups to discuss product diversity and to become active in the Fifth Avenue BID.”

The U.S. arm of the German grocer, based in Arlington, Va., has 170 locations in the country, including ones in Harlem, Astoria and Staten Island. Last month, it announced plans to grow its New York City presence and open a 35,000-square-foot location in Elmhurst, Queens.