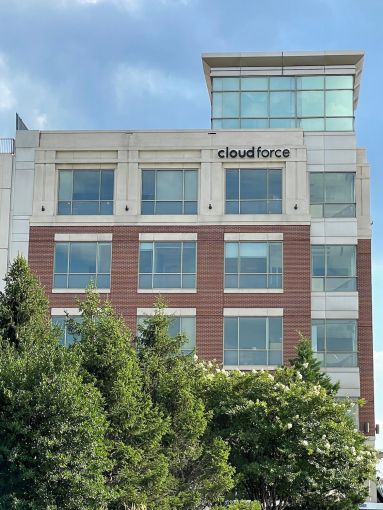 Cloudforce, a cloud solution company, is staying in National Harbor and tripling its space, according to the company.

Cloudforce, which will become the site’s largest tenant, also secured naming rights for the building.

The property, like all of National Harbor, is owned and managed by Peterson Companies.

“We are extremely pleased that Cloudforce has remained at National Harbor and has significantly grown,” Howard Jensen, vice president of leasing and commercial for Peterson Companies, said in a prepared statement. “The company’s commitment to National Harbor, to Prince George’s County and its commitment to hire a high percentage of local talent is a significant economic boost to the entire region.”

By taking a larger space, Cloudforce will now accommodate more than 75 team members at one time, with room to grow to more than 200 full-time employees thanks to hybrid schedules.

“Locating our headquarters in National Harbor was a strategic decision that has proven vital to our continued growth and success,” Husein Sharaf, president and chief technology officer at Cloudforce, said in a statement.