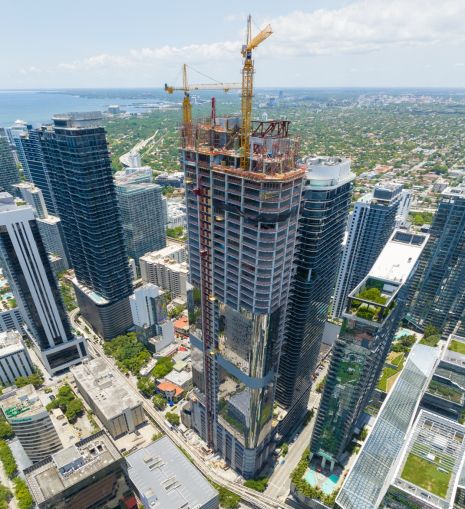 830 Brickell, which will be completed this year. Photo: Golden Dusk Photography

The global firm inked a 10-year lease for 18,000 square feet at the 55-story development set to be completed later this year.

Baker McKenzie, which is headquartered in Chicago, has had an office in Miami since 1984, most recently at 1111 Brickell Avenue, otherwise known as The Sabadell Financial Center, where it leased about 24,000 square feet, according to a spokesperson for the firm.

“We are committed to Miami and believe this new space will be a reflection of our high-caliber talent who provide our multinational, diverse client base with a full range of legal services,” Scott Brandman, managing partner of Baker McKenzie’s Miami and New York offices, said in a statement.

Baker McKenzie partners expect to move into the new office by the second half of 2023.

At 830 Brickell, the law firm will join other Chicago-based law firms Sidley Austin and Winston & Strawn, which are taking 60,000 square feet and 35,000 square feet, respectively.

Earlier this month, financial firm Citadel, which is relocating its headquarters from Chicago, inked a 90,000-square-foot lease for a temporary office as it develops a permanent base along Brickell Bay Drive.

830 Brickell’s developers, Vlad Doronin’s OKO Group and Cain International, expect the 640,000-square-foot skyscraper to be fully leased by the end of the year.

New-to-market companies in Miami have flocked to the development, the first office tower erected in the city in a decade, where asking rent has risen to as much as $150 a square foot.