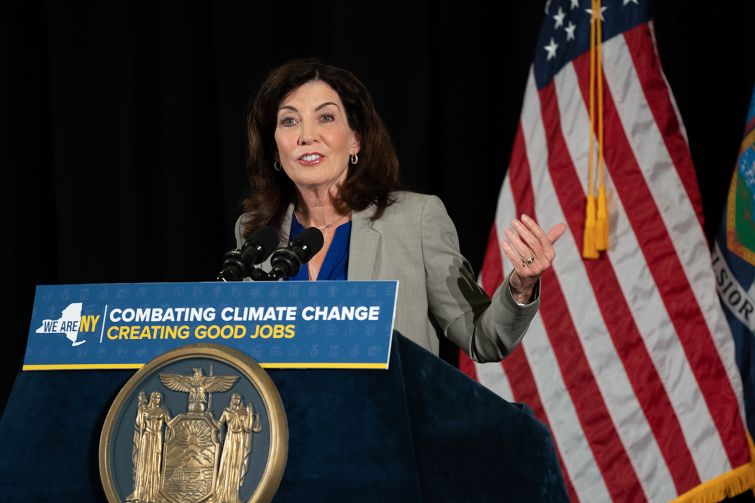 Gov. Kathy Hochul and Albany lawmakers are closing in on greenhouse gas emissions, creating a new policy for shifting historic buildings away from antiquated energy and appliance systems.

Gathering with legislators at Newlab HQ in Brooklyn Navy Yard Tuesday, Hochul signed the Advanced Building Codes, Appliance and Equipment Efficiency Standards Act of 2022 into law, which gives state officials the authority to decide which buildings should be exempt from new energy codes and which should not.

Under the State Energy Conservation Construction Code, buildings that would qualify for entry in the National Register of Historic Places would be automatically exempt from meeting new energy code standards. Under the new law, a decision whether a refit would be required at a property would be based on a life-cycle cost analysis, meaning fewer buildings will filter through regulations without any upgrades.

The law also establishes higher standards for appliances, equipment or fixtures that consume energy, including televisions, computers and lighting.

The signing of the bill comes days after a U.S. Supreme Court ruling that limited the federal Environmental Protection Agency’s ability to restrict carbon emissions from power plants.\

“We are not letting the Supreme Court block our goals or our bold ambition for our state,” Hochul said, adding the state hopes to generate 70 percent of electricity from renewable energy by 2030 and reduce emissions by 85 percent by 2050. “At a time when our citizens are getting slammed with inflation, the high cost of living and any way we can reduce their costs is so important to them. So it will help them with their energy costs and rising bills.”

Hochul expects the switch to renewable energy can save New York residents up to $15 billion per year, with about $6 billion of that being for low- and middle-income households, according to the governor.

Fiona Cousins, Americas’ chair for Arup, an engineering and design consulting firm says a major benefit of these bills is that they empower the secretary of state and the New York State Energy Research and Development Authority to set minimum energy efficiency standards for a long list of appliances that were not previously regulated. One of the biggest benefit is that it provide guidance to businesses running commercial kitchens.

“There are a whole series of building changes that you can make that are typically exempt from energy upgrades and the first thing that the law does is it makes them not automatically exempt or not necessarily automatically exempt,” Cousins told Commercial Observer. “Unlike some other laws that are out there about the effective building size or shape, these [bills] are pretty straightforward. It’s pretty descriptive. ‘You will do this and you will do it better than you otherwise might have chosen.'”

But 11 states have already passed higher standards than New York in terms of climate protection, according to the Natural Resources Defense Council.

It’s unclear where New York stacks up when taking into account New York City’s Local Law 97 and the New York City Council’s December 2021 vote to ban the use of natural gas in all new buildings. Local Law 97, set to take effect in 2024, will require that buildings spanning 25,000 square feet or more reduce carbon emissions by 40 percent by 2030, and by 80 percent by 2050.

A month ago, Mayor Eric Adams announced that his administration would remove barriers to sustainable development by relaxing zoning laws when it comes to energy efficiency.