NYC Has Banned Gas Heat in New Buildings. Now What?

The answer could be blowing in the wind 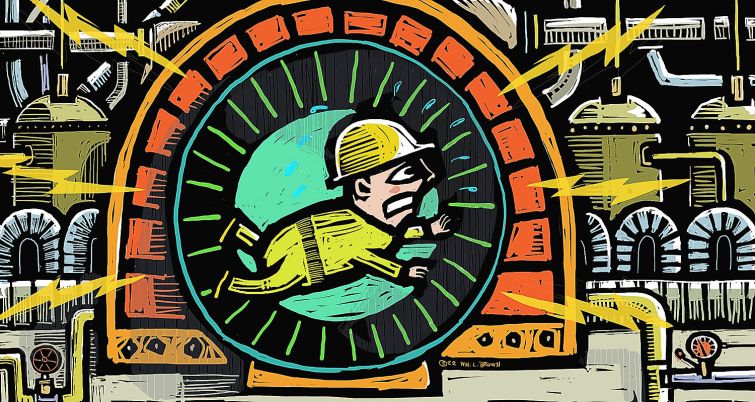 Gas stoves are being pushed into obsolescence in New York City after the City Council voted in December 2021 to ban the use of natural gas in all new buildings, and, while environmentalists and many in the real estate industry agree that it’s for the better, how alternative power sources will hold up to the needs of future builders is uncertain.

There’s an added wrinkle to the switchover, which former Mayor Bill de Blasio signed into law shortly before he left office. The five boroughs will need  to be able to make the switch in a cost effective way while also meeting the city’s goal of reaching carbon neutrality by 2050.

Many officials, including New York Gov. Kathy Hochul, see wind-generated electricity as a big part of the solution.

The passage of the bill was not without debate, too, with some advocates wanting the timeline for all new buildings to meet the all-electric requirements in two years, while others pushed for bigger developments to comply within five years.

While the law does not require building owners to retrofit buildings at this time, the Real Estate Board of New York, the most prominent group lobbying on behalf of the city’s developers and owners, believes that the first hurdle of enforcing the new law will be changing the power grid to carbon neutral alternatives from gas power plants to meet a five-year deadline.

“The carbon-free generation for electricity in 2022 is not where it needs to be to achieve the goals of the legislation,” said Alexander Shapanka, REBNY’s assistant vice president of policy. “Having that kind of date in mind allows industry stakeholders who are engaged in technology development to understand that there is going to be a certain clientele that needs to meet a certain threshold or requirements by that date, gives them something to work towards, and I think the industry is more confident that five years from now the technology will be more in place than it is today.”

The law allows the New York Department of Buildings to deny construction documents and permits for new buildings that would require combustible fuels, with some exceptions where electrification might not yet be a feasible substitute. Buildings less than seven stories will need to meet the requirement in two years while bigger buildings have a 2027 deadline.

Pete Sikora, climate and inequality campaigns director for New York Communities for Change, an advocacy group, said he believes it could be easier and cheaper in the long run for building owners to break away from gas stoves, which contribute to asthma cases not only through gas power plants but through the appliances with which New Yorkers cook.

A 2019 survey conducted by the city Department of Health and Queens College known as the Community Air Survey, for example, found that between 2009 and 2019 the annual average levels of fine particulate matter, nitrogen dioxide and nitric oxide declined by over 33 to 52 percent respectively in New York City once buildings converted to cleaner oils.

“The good thing about upgrading the energy efficiency of buildings is that it saves you money on operating costs and utility bills,” Sikora said. “So, generally speaking, this isn’t the case in every situation, but in most buildings, you can finance improvements and then save money, net. You take out a loan or you finance it out of your capital projects and on a present value basis, you start to save money … in the amount of energy the building consumes.”

Major renovations to existing buildings will however be a challenging chapter in the long-term mission to eliminate the appetite for natural gas, according to REBNY’s Shapanka. With somewhere in the ballpark of half of New York City buildings having been built before 1960, he says, lead paint and asbestos will likely only compound the costs of switching over from gas.

On the other hand, Shapanka said that all-electric construction is more expensive, but only by a couple of percentage points.

But with an average of 131,383 total new and renewal permits issued in the city annually, per the DOB, of which Manhattan accounts for 644 new building permits alone, Sikora said the bulk of the emissions already exist and new construction will not be enough to offset greenhouse gas emissions.

While REBNY worked to extend the deadlines for compliance prior to passage of the bill, Sikora said New York Communities for Change was pushing the proverbial gas pedal in eliminating fumes. Buildings greater than seven stories should have to meet the same timeline as smaller developments, the organization maintains.

A big part of that changeover to electricity will not come without a revolution in the way New York gets its energy, and could come through wind and hydroelectric power, something politicians have been working on for years.

On Jan. 14, Hochul provided an update on the effort to switch to wind farming, announcing the latest contracts awarded by her administration to the state Energy Research and Development Authority (NYSERDA) for the construction of two projects: Empire Wind Offshore and Beacon Wind. This marked the second offshore wind contract award and follows a commitment of $500 million for the change to wind farming from the state.

The contracts cover a $357 million offshore wind tower manufacturing facility that Empire Wind and Beacon built at the Port of Albany and $287 million for an offshore wind staging and assembly facility owned and managed by the city at the South Brooklyn Marine Terminal (SBMT).

Like her predecessor Andrew Cuomo, Hochul has argued that the state investment in offshore wind will create thousands of jobs while preparing the state for the future, for better or worse.

Hochul’s announcement came after issuance of the Bureau of Ocean Energy Management’s (BOEM) final sale notice for the wind-energy auction for more than 480,000 acres in the New York Bight, a portion of the Atlantic Ocean located offshore New York and New Jersey.

Empire Wind is expected to generate 1,260 megawatts and Beacon could produce up to 1,230 megawatts when it comes online between 2027 and 2028, according to the Hochul administration, with a total price tag from public and private interests of $644 million in port infrastructure. In the next round of offshore wind contracts, the state expects to agree to a deal to create 2 gigawatts of additional power.

But with the state currently consuming over 54 million megawatt hours of energy per year — one megawatt hour is defined by 1,000 kilowatts of electricity generated per hour —  more resources are needed.

As 2021 drew to a close, Hochul announced that the Roaring Brook Wind farm would produce 79.7 megawatts from 20 wind turbines across about 4,700 acres in the town of Martinsburg, N.Y. That amounts to 229,000 megawatt-hours per year and a reduction in emissions by 114,000 metric tons.

U.S. Energy Secretary Jennifer Granholm said Jan. 14 that in order to meet President Joe Biden’s plans to make the electrical grid 100 percent from clean energy by 2035, the grid itself may have to double in size.