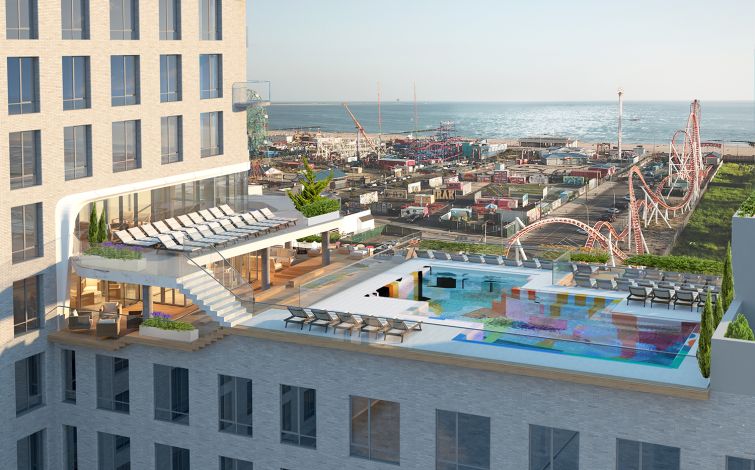 New York City’s oft-maligned Local Law 97, which requires owners of most larger buildings to reduce their carbon emissions, has been subject to criticism and even a lawsuit calling the measure financially burdensome and unconstitutional. But for some developers, the law has proven to be a welcome catalyst for pursuing environmentally friendly developments — ones with the potential to be quite profitable.

From Coney Island to Midtown, the city’s towers are going green through the power of retrofits and new energy sources such as geothermal heating. Thanks to pressure from the City Council, the public and even landlords’ own tenants, commercial real estate owners might actually see an added benefit via leasing in tackling head-on the very pollution the real estate industry has played a major role in creating.

New York City’s buildings are responsible for 66 percent of the city’s total carbon emissions, beating out a 60 percent contribution on average among 32 major cities tracked in a report from brokerage JLL. And, as the saying goes, with great power (for contributing to the climate crisis), comes great responsibility.

“​​It’s our responsibility to push the envelope and explore these alternative means and methods,” Anthony Tortora, senior vice president at the real estate investment and development firm LCOR, told Commercial Observer. “We have to think about it at every level down from plastic water bottles all through designing a 400-unit building. Every contribution matters, and certainly [Local Law 97] was an opportunity to effect change on a larger scale. I think our industry should be thinking about it.”

Large-scale change was part of the reason why, in March 2019, the City Council passed Local Law 97, which requires owners of most buildings of at least 25,000 square feet to begin to reduce greenhouse gas emissions in 2024, with the goal of cutting emissions by 40 percent by 2030 and 80 percent by 2050. The rule was part of the Climate Mobilization Act, a host of initiatives the City Council passed to address climate change.

There’s a financial incentive for greening a property, though such developments tend to carry an additional upfront construction cost. Environmentally friendly buildings can charge a rental premium of around 6 percent and a sales premium of 7.6 percent for both commercial and residential properties, according to a 2018 book on the topic.

“It’s definitely a differentiator,” said Michael Izzo, vice president of carbon strategy at developer and owner Hines. “Especially in the market that we’re in, where we need to attract people to a building.”

Hines has just started the leasing process at 555 Greenwich Street, a ​​270,000-square-foot, 16-story office tower powered with geothermal and radiant heating and cooling. The building, which Hines expects to complete by 2023, is also connected to the electrical grid to avoid burning fossil fuels on-site for power. The tower itself will exceed the city’s 2030 climate targets for office buildings and meet the state’s 2050 carbon neutrality goals — in part driven by the state’s plans to transition the electric grid toward renewable sources of energy.

The building’s lower carbon footprint will certainly play a key role in how CBRE’s Howard Fiddle plans to market it, he told CO. When Fiddle started at CBRE in 1988, carbon emissions, sustainability and the environment were simply not part of the conversations that Fiddle, who mostly represents landlords, would have with potential tenants. But for certain tenants today, it’s their first priority.

“It has been a 180-degree difference, and for all the right reasons,” Fiddle said. “It is not lip service or just checking a box at all. It’s a mandate.”

Tenants have good reason to care about a building’s carbon footprint because Local Law 97 could end up costing them, too. Fiddle’s deals often include a clause outlining how much a tenant would pay if a building were to incur a fine for exceeding its legal carbon emissions limitations, which tend to be structured around a tenant’s energy consumption rather than square footage. Because these clauses are so new, there’s no standard on how costs are negotiated, but that additional risk of having to pay for a building’s fines certainly pushes tenants toward newer buildings that can guarantee compliance with the law, he said.

Nationally, office workers expect their employers to create a more eco-friendly office environment, according to a recent survey of 2,000 U.S. office workers from the hygiene and health company Essity. About 56 percent of those surveyed thought their bosses could do more to make their offices more sustainable, and 51 percent said their employers needed to do more to communicate how they are tackling sustainability.

Aside from these external pressures, developers and landlords such as LCOR, Empire State Realty Trust (ESRT) and lenders like Nuveen Green Capital feel the real estate industry has an additional responsibility to tackle climate change. LCOR, for example, is working on one such project in Coney Island at 1515 Surf Avenue, a 463-unit multifamily development with 11,000 square feet of ground-floor retail space. It uses water heated through geothermal power.

For LCOR, Local Law 97 was a key component in considering how to power its new complex, though Tortora said the developer certainly would have studied geothermal options even if Local Law 97 wasn’t in place.

The same was true of ESRT, which used its own buildings as examples in a free online guidebook it, other landlords and the New York State Energy Research and Development Authority released in April. ESRT used a relatively low-cost film on the windows of the Empire State Building to quadruple the property’s ability to keep out heat during the summer and inside during the winter — lowering air-conditioning and heating costs.

“I think that Local Law 97 is an excellent way to mobilize the entire community to act on this,” Robbins Schneider said. “Building owners have a unique opportunity to contribute to a solution because the built environment is the largest contributor to emissions globally, and certainly in cities like New York.”

In these developers’ own words, Local Law 97 is achieving its purpose to encourage building owners to green their properties — and, hopefully, attracting the attention of climate-cautious tenants. But none of these retrofits and new developments would happen without capital, something Jessica Bailey, CEO and co-founder of Nuveen Green Capital, is keen to provide.

Nuveen, which lends on projects nationally, has doubled its origination volume every year since its green capital fund started in 2015 and expects to handle around $500 million in loans in 2022, Bailey said. Nuveen also handled the financing behind the replacement of 730 Third Avenue’s windows with smart windows.

Local Law 97 is not without its critics. The Durst Organization has opposed the rule, arguing it punishes building owners who have already made eco-friendly upgrades to their properties. The prime example is 1 Bryant Park, a $1.8 billion tower credited as the city’s greenest when it was completed in 2010, but one that Durst expects to incur millions in fines because it is densely occupied by Bank of America’s trading floors.

Buildings with trading floors — large spaces where hundreds of people at a time use multiple computers and phones to buy and sell securities — can incur higher penalties from Local Law 97 thanks to the much higher energy use and cooling required to operate the spaces. Owners of trading floors have criticized Local Law 97 as a result, saying it would unfairly penalize landlords with large financial tenants and fails to account for densely occupied buildings, CO reported.

Local Law 97 has also faced court challenges. A group of three developers and property owners filed a lawsuit against the city and the New York City Department of Buildings in New York Supreme Court at the end of May, calling the law’s penalties “draconian,” overly expensive to owners and unconstitutional.

“While my clients recognize the issue of addressing climate change, Local Law 97 does so in name only,” Randy Mastro, a partner at Gibson Dunn & Crutcher who represents the plaintiffs, said in a statement to CO. “New York state has already enacted a comprehensive greenhouse emissions law that covers the field. But the city has massively overreached here and far exceeds its constitutional and statutory authority.”

Despite the attention from both proponents and detractors that Local Law 97 has received, the rule is far from the city and state’s only climate regulation. The Climate Mobilization Act requires that solar panels, green roofs or both are installed on all new buildings and those undergoing major roof renovations. Local Law 87 requires buildings larger than 50,000 square feet to undergo energy audits and submit an energy efficiency report every 10 years. And Local Law 33 requires certain buildings to display an energy efficiency score near a public entrance.

Ultimately ESRT, Hines and LCOR expect to get a return on the firms’ investments into clean energy — or at the very least avoid paying fines of $268 per metric ton of carbon dioxide a building emits above its limit. ESRT calculated potential annual fines as high as $580,000 on 250 West 57th Street if it made no upgrades to the property. And, at best, the firms hope to see increased leasing and asking rents as a result of those efforts, Fiddle said.

“Most landlords are doing this because it is more profitable,” Fiddle said. “I think there are good landlords out there too [that are] doing the right thing by saving the planet, but [what] they’re really about is ‘How am I maximizing my dollars?’ I think it’s a good investment, meaning someone will pay for it, meaning the asset will have more capital. I believe that wholeheartedly.”