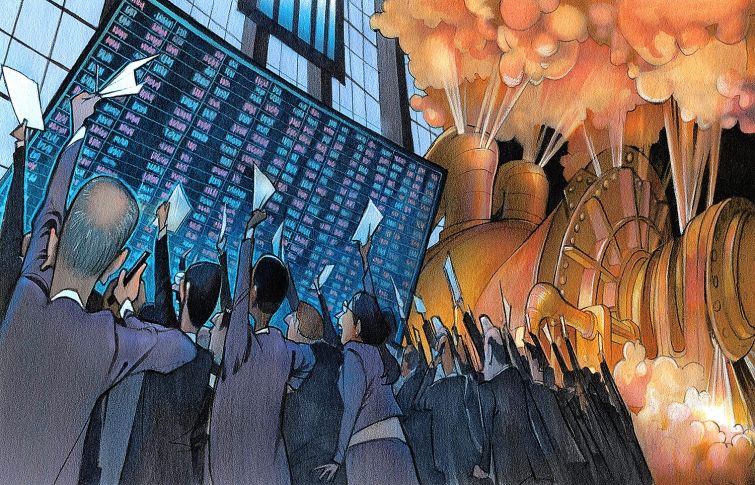 Trading floors have always represented the beating heart of major banks: hundreds of people at a time hunched over their computers, yelling, gossiping, chatting on the phone, and, most importantly, generating revenue for their employers.

A typical office floor in New York City might have had 150 or 200 people working in it before the pandemic. A standard trading floor at a major financial institution would have seated 400 to 600 people, each of whom used multiple monitors, a desktop computer and a specialized telephone system called a turret, which can process hundreds of simultaneous calls at once. Many trading floors used to have their own data centers for on-site backup, too, though those have disappeared with the rise of cloud backup services.

Besides the density of people and electronics, trading floors were and are unique because they require significantly more ventilation than a typical office. The heat generated by so many people, computers and screens running at once typically requires an underfloor ventilation system to cool the room efficiently. Trading floors tend to have high ceilings — at least 15 or 20 feet  — that make cooling the room from above significantly less effective than cooling it from below.

Architects, engineers and landlords argue that for all of these reasons, trading floors use much more energy than a regular corporate office. These humming financial hubs, then, pose a big problem for landlords who have to lower their energy consumption to comply with New York City’s green buildings law, Local Law 97. Starting in 2024, owners of buildings larger than 25,000 square feet will have to pay significant fines if they don’t meet the law’s energy benchmarks, which are aimed at curbing carbon emissions.

At the same time, the pandemic has forced financial firms to digitize their trading in ways they hadn’t before. Most banks have moved their trading operations to cloud-based platforms. These virtual desktops allow traders and analysts to use Bloomberg Terminals and other electronic trading software from home. A thin client terminal — basically a stripped-down computer that connects to a remote server — enables traders to access their virtual desktops and do their jobs from anywhere. And “digital turrets” — an online version of the telephone switching system that traders use in-office — mean traders can handle a higher volume of calls while working outside of the office.

All of this means that traders can do their jobs with more energy-efficient tech. Many trading floors are moving toward eliminating desktop PCs in favor of thin client terminals, which use significantly less electricity. And, when a trading floor has fewer computers and servers, cooling the room requires less energy.

Still, while many trading floors have smaller carbon footprints than they did a decade ago, their operations still require more power than a legal practice, a nonprofit organization or an architecture studio.

“A trading floor consumes more energy than a regular office floor, period,” said Ece Calguner Erzan, a design principal at SOM who has worked on several trading floor projects in New York City. “Whether they’re existing or new, trading floors have 400, 500, 600 people together. When you have that many people on one floor, your energy loads are much higher. And it’s about how much energy you need to cool 400 or 500 CPUs [central processing units].”

But she added that “with the changes in technology, trading has changed quite dramatically in the past five to 10 years. There are no more data centers — now with the cloud, everything is out of the building. Or there’s a data center in New Jersey, so we no longer have to cool those. And when you don’t have a CPU on your desk, you’re reducing the heat. It gives traders a lot of flexibility and mobility.”

Erzan’s SOM colleague John Pickens, an associate principal who handles the technical side of trading floor design, explained that despite the advancements, trading “still tends to be a higher electrical load. There’s a little bit of an outcry about trading floors versus typical offices, because Local Law 97 doesn’t distinguish between a law firm and a trading floor. It classifies it all as an office use space.”

Lighting is also a big factor in energy use. Sensors that dim lights during the day and shut them off at night can help reduce electrical loads for all kinds of offices, including trading floors. Pickens noted that there are sensors emerging now that allow landlords to shut down computers and other electronics after someone leaves their desk. Some desks already have built-in timers that put computers to sleep.

Of course, migrating to thin-client terminals from desktop computers remains one of the biggest energy savers. “There may still be trading operations in the city that are using local CPUs at their desks, and they need to invest in moving that [computing] outside the city, where there is no Local Law 97,” Pickens said.

Standardizing traders’ screen setups is another step toward reducing electricity use, according to Marisol DeRosa, an architect in Gensler’s financial services practice who worked on Deutsche Bank’s new Columbus Circle headquarters.

“Every trader has their personal preference in terms of screens,” she said. For example, some traders prefer four or six standard monitors arranged like a cockpit, while others have three curved, long screens arranged in a line. At Deutsche Bank’s trading floor in 1 Columbus Circle, “we have a standardization of the screens,” so every trader has the same number and type of monitors on their desktop, DeRosa explained.

“Because they weren’t fully migrated [to thin client], we have built in that flexibility in the desk setups,” she said. “One for traders that have already gone to the cloud, and the second one with a CPU bracket for those that haven’t migrated to the cloud.”

Owners, for their part, feel that Local Law 97 will unfairly penalize them because they have large financial tenants in their buildings.

At One Bryant Park, landlord the Durst Organization faces millions of dollars in potential fines, despite installing environmentally friendly features like a cogeneration plant, geothermal heating and air conditioning enabled by underground ice storage. Bank of America, the building’s anchor tenant, has trading floors on the second through sixth stories of the 2.1 million-square-foot office tower.

“There’s no way to mitigate those uses in a way that won’t use more carbon,” said Jordan Barowitz, a Durst spokesman. “We could have fewer people working in the building, but then they would be working in a less efficient building and using more carbon. We could unplug our cogeneration plant, which is twice as efficient as a regular power plant, and plug into the grid to heat the building. But, because the grid is not powered by renewable energy, we would just be using more carbon.”

Durst, then, feels like it’s being punished for owning a densely populated office building, a sentiment other owners might share. Meanwhile, industry working groups are helping the city’s Department of Buildings develop more fine-grained Local Law 97 rules, which could adjust energy standards for different kinds of tenants. There’s even been discussion of mitigating penalties for denser office buildings. But Barowitz argued that it wouldn’t be enough.

“The working groups are trying to figure that out but they are constrained by the language of the law,” he said. “The law is quite specific and you have to be very creative to navigate around the specificity of the legislation. There’s not a tremendous amount of flexibility.”

“If the industry has a really good, thought-out analysis of different types of buildings with trading floors and without trading floors, I’d like to hear it,” he said. “There’s yet to be evidence presented that this is actually a big problem.”

He added that there are more basic energy upgrades that landlords could undertake.

“In the short run they need to implement some energy efficiency improvements,” said the activist. “Their exterior lights are on during the day. And they’re not LEDs, so apparently they’re going to retrofit that.”

Buildings like One Bryant Park can apply for waivers from the Local Law 97 benchmarks, he said. And owners will have the option to purchase renewable energy credits (RECs) to offset some of their carbon footprint. Offshore wind projects and hydroelectric lines that will green New York City’s electric grid are expected to come online starting in 2025 and 2026, which would open the doors for a carbon credit system. However, the city and the state have not yet released rules and pricing for the RECs, leaving landlords unsure of how much they will be able to buy.

“There is a process underway in the Department of Buildings to do finer categorization of building types,” Sikora said. “It will map limits to a better approximation of what’s fair for any given building.”

Density adjustments might be in the works too. Most office owners know how many people swipe into the building every day, though other kinds of landlords don’t necessarily use that technology.

“A way to make the law even more fair is to set in place some system to account for low and high density of a building,” Sikora said. “That’s very tricky. How would you track it and how would you compare it? Are you counting people as they walk in and out of the building? That’s not a practical system for the vast majority of real estate. The way we’re encouraging the Department [of Buildings] to think about it is — if there’s some sort of density tracking, it has to be practical and workable and not too complex. It’s possible to make it less valuable than the compliance makes it worth. If you’re going to give a density adjustment it has to go both ways, and it has to produce the same level of pollution cuts.”