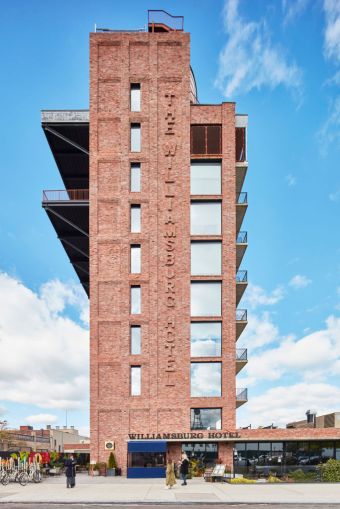 A federal bankruptcy court judge removed developers Michael Lichtenstein and Toby Moskovits from control of the bankrupt Williamsburg Hotel in Brooklyn, after finding that the two might have committed fraud and can’t be trusted with their swanky flagship property.

Judge Robert Drain put an independent trustee in control of the hotel at 96 Wythe Avenue at the end of May, saying he “cannot trust the debtor’s principals” to uphold their fiduciary duties, The Real Deal first reported.

The 147-room hotel between North 10th and North 11th streets is a key part of Moskovits and Lichtenstein’s Heritage Equity Partners’ Brooklyn portfolio, but Heritage filed for bankruptcy on the property in February 2021, nearly a year after defaulting on its loans. The two still own the eight-story building but are no longer in charge of its operations, and Drain advised Lichtenstein not to make things worse for himself.

​​“[Lichtenstein] comes across as a very volatile person who is prepared to take stances that if one would just step back and think about them, don’t make a lot of sense,” Drain said, according to TRD. “And I do have some concern that he’ll do something really stupid here.”

The Williamsburg Hotel is facing foreclosure from its lender, Benefit Street Partners, which gave Heritage a $68 million loan in 2017 after the firm bought the lot in 2012 for $4.85 million, Commercial Observer previously reported. Heritage defaulted on that loan in 2019, after the hotel saw low occupancy and revenue per available room. A spokesperson for the firm said that Heritage has done well to steer the hotel through the pandemic, and would pay off its creditors and conclude the bankruptcy process in the near future.

“Ownership invested significant amounts of equity into the Williamsburg Hotel and followed that up with additional loans to support the opening period, a small portion of which loans were repaid well before the bankruptcy,” the Heritage spokesperson said in a statement. “Throughout this process, we have worked closely with our excellent team as we brought the Williamsburg Hotel to the amazing success it is today. We achieved this result in one of the most difficult periods for the hospitality industry.”

Despite having offers from bidders to purchase the hotel for $135 million in 2019, Moskovits denied that she would put the hotel up for sale and almost arranged a $76 million refinancing to cover its default — but the deal never closed, CO reported.

After Moskovits took the hotel to bankruptcy court last year, Benefit Street Partners’ lawyers alleged that Heritage siphoned money out of the property instead of paying its debts. A court-appointed investigation backed up Benefit’s claims and found that Moskovits and Lichtenstein obstructed the investigation, failed to pay taxes and engaged in a “complex scheme” to divert millions from the debtors, according to the investigator’s report.

Lichtenstein criticized Benefit and another lender, Fortress Investment Group, saying in court filings that the two are “in a competition on who is the biggest asshole lender in New York City.” Heritage’s legal team disputed the fraud allegations, saying that any funds went to pay the debtor and that Heritage had no taxable income before the bankruptcy declaration, TRD reported.

Drain also sided with Benefit’s allegation that Moskovits and Lichtenstein misused a federal Paycheck Protection Program loan that Drain said mostly did not go to support hotel workers. Heritage disputes this claim. The Heritage spokesperson said that the loan was used “for purposes intended by the program — to keep its team employed through the COVID challenges.”

Heritage has faced other problems with its lenders after the pandemic ripped through the hospitality industry. It filed for bankruptcy on its uncompleted 144-hotel room hotel at 232 Seigel Street in Bushwick in 2020 and has faced foreclosure from other lenders.

Fortress, Benefit and Heritage’s lawyer, Douglas Spelfogel, did not immediately respond to requests for comment.