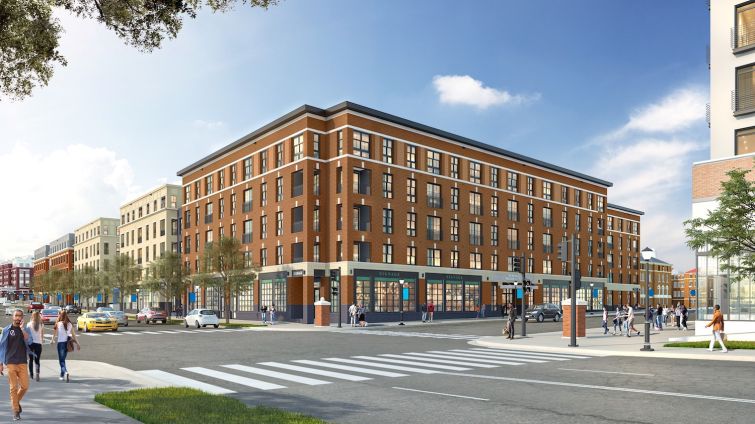 Urban Atlantic and Triden Development Group have received $75.6 million in construction financing for the development of The Reynard, a 344-unit apartment community in Washington, D.C.

J.P. Morgan Chase provided the conventional construction loan, though no details on terms were disclosed. The financing will be utilized for all costs related to the construction and a lease-up of the property before it is eligible for permanent financing, according to Urban Atlantic.

The 300,000-square-foot Reynard will be the latest addition to The Parks at Walter Reed, a mixed-use neighborhood consisting of more than 3.1 million square feet of new construction and adaptive reuse of existing historic structures. The 66-acre redevelopment in Ward 4 is a public-private collaboration between the District of Columbia and the joint development team of Urban Atlantic, Triden Development Group and Hines.

“The Parks at Walter Reed is a growing, vibrant community that upends the ordinary,” Mark Simpson, development manager for Urban Atlantic, told Commercial Observer. “The Reynard is the next multifamily phase that will offer luxury finishes and phenomenal amenities within steps of the future Whole Foods Market.”

The Reynard, the 10th multifamily project in the area, is within a short walk to a Metro station and amenities in nearby Takoma.

Twenty-six units will be income-restricted and reserved for households earning 80 percent or less of area median income. The apartment community will include a coworking space, a fitness center, a resort-style pool and a makerspace with podcast studios.

Connected by 16 acres of green and open space, the neighborhood will ultimately feature 130,000 square feet of grocery-anchored retail; more than 2,200 units of townhomes, condos and apartments; ambulatory care by Howard University; a foreign language immersion charter school; and a mix of recreation, arts and hospitality.

“As a later phase project, Reynard residents will enjoy the best of the Parks which will be open and thriving by the time the building delivers,” Simpson said.

Requests for comment from J.P. Morgan Chase were not immediately returned.