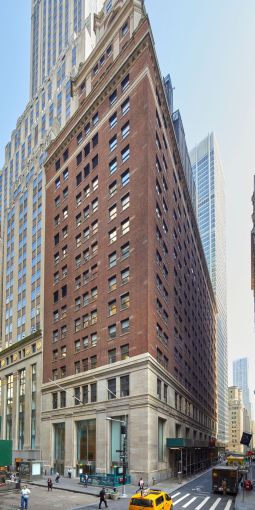 It’s not false advertising. Joan Creative inked a deal to increase its footprint at 44 Wall Street.

The advertising agency snagged a 10-year lease to relocate from its 11,734-square-foot space on part of the 10th floor to 17,337 square feet on the entire 12th floor of the tower before the end of the year, Commercial Observer has learned. Asking rent at the building ranges from $54 to $60 per square foot, according to George Comfort & Sons, which manages the property for landlord Gaedeke Group.

Joan needed more space to serve its growing client roster, which includes Google, Netflix and Uber, but didn’t want to leave the 24-story office building where it has been for four years, said Newmark’s C.J. Heitner, who handled the deal for Joan Creative with Matt Shreiner.

“The downtown location has been a great place for a creative company like Joan’s business to thrive since they signed their lease in 2018,” Heitner said. “Their renewal and expansion is a testament and commitment to New York City and expanding their footprint as they grow the business.”

Joan was among a handful of other tenants that expanded at the Financial District tower between William and Nassau streets. Among them is recruiting software firm JobDiva, which inked a five-year deal to relocate from 5,000 square feet on the 16th floor to 6,600 square feet on the fourth floor before the end of 2022. JobDiva, which has based its headquarters in the building for more than a decade, previously held 21,000 square feet across part of the 16th, 18th and fifth floors, Real Estate Weekly reported.

It’s unclear if the firm still occupies that space, and representatives from George Comfort & Sons declined to comment on JobDiva’s total footprint at the tower. The tenant did not immediately respond to a request for comment. George Comfort & Sons’ John Thompson represented JobDiva in the transaction.

The 354,000-square-foot building is also home to enterprise technology firm T-REX, which took another 3,300 square feet at the end of May to expand its 5,022-square-foot offices on the ninth floor, said Savills’ Ken Biberaj, who represented T-REX in the deal alongside Christopher Foerch. Both the firm’s original lease and expansion expire in 2025, and T-REX, which provides a platform to analyze financial data behind buying and selling assets, has been at the property since 2020, Biberaj said.

Biberaj said T-REX needed the extra space after it raised $40 million in a funding round led by the private equity firm Riverstone Holdings in January and has “been growing and their employees are coming into the office.”

The building scored two brand-new tenants as well. Robert Elliot Leslie Architecture snatched up 2,700 square feet in a five-year deal, and the nonprofit Parliamentarians for Global Action took 2,300 square feet, both on the ninth floor. The architecture firm will relocate from 150 Broadway before the end of the year, according to a representative from George Comfort & Sons.

“The property’s excellent location as well as its clean, classic lobby and great natural light continue to attract the city’s top firms, and we were glad to offer the quality and flexibility these companies were seeking,” said Peter Duncan, George Comfort & Sons’ president and CEO who represented the landlord in all five transactions with Matt Coudert and Alexander Bermingham.

Cushman & Wakefield’s Peter Kerans and David Mosler handled the deal for Robert Elliot Leslie Architecture. Kerans and Mosler did not immediately respond to requests for comment.