Pay Wu and Jodi Pulice On MWBE Unite, Which Aims to Diversify Subcontracting 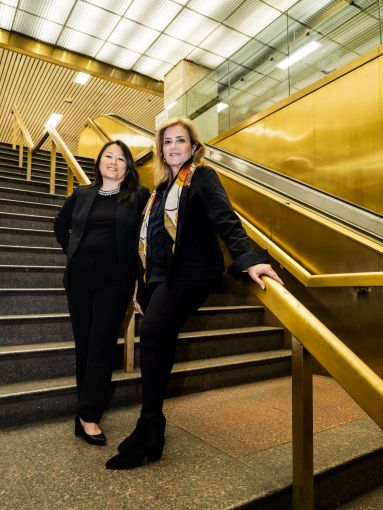 For many commercial real estate firms, minority and female subcontract guarantees are part of the boilerplate in every construction contract, public or private.

Not for Pay Wu. Or Jodi Pulice.

The purpose of the subsidiary is to make sure minority- and woman-owned business enterprises (that’s what the acronym MWBE means) get their fair share of the subcontracts that are typically included as a subset of every construction project, in what is still a white male-dominated industry. Both a consultancy and a platform supplier, the new entity also aims to help these subcontractors scale through partnerships when necessary as they might not be individually large enough to compete.

For Wu, it’s been a whirlwind. For three years, she was at Cushman & Wakefield, leading its outsourcing corporate services team in the Americas East region. Before that, she oversaw real estate, first at American Express, then at TD Bank.

Last month, Commercial Observer spoke to both about their past, present and future efforts. Their responses have been edited for brevity and clarity.

Commercial Observer: Tell me the whole story behind MWBE Unite and what you will be doing there?

Pay Wu: MWBE is a company that has been incubated out of JRT Realty. It is an entity that is going to be aggregating minority- and women-owned businesses in the commercial real estate industry in order to advance supply and workforce diversity, to solve for the gaps that are in the industry right now.

So how is MWBE going to make a difference?

Wu: Legacy-wise, traditionally minority- and women-owned businesses had tried to participate and compete for business, usually in partnership with a larger firm. The cooperation on that front is still very much needed. But there will also be more than an appetite by corporations as well as municipalities to buy directly from minority- and women-owned businesses at scale.

The intent is that the platform company will be a way for the firms to participate and look for business and benefit naturally, as well as improving visibility to scale their business. In doing that, we will also be training a diverse workforce. That is so important to the next generation of the industry.

In essence, we’re providing a platform to corporate America, as well as to private and public agencies, a one-stop shop. The complaints of the past have always been there aren’t minority firms that do architectural, engineering or any other commercial real estate industry-related jobs. There are no companies of the sort that do real business.

MWBE Unite will be that one-stop shop, so that members will be able to show the world that they absolutely do exist and do want to actively participate in business that’s coming from corporate America and from city and state agencies.

Explain the transition from Cushman to this.

Wu: I actually left Cushman in January to build this business with Jodi. We are in the process of ramping up and signing alliance agreements with different minority- and women-owned businesses. I used to be an executive at American Express and at TD Bank, in buying and outsourcing services and also in transacting real estate projects.

And then I was at Cushman & Wakefield for three years, running the outsourcing business. It became very apparent that from a diversity, equity and inclusion perspective, it was important for the industry to tackle this like a think tank, as opposed to individual companies trying to do it themselves, so that the corporate and the institutions and government entities are not looking for a needle in a haystack.

It becomes a trade-off when you’re up against deadlines and timelines and RFP processes. And the fact of the matter is sometimes that trade-off sort of ends up in a place where it’s tough to effectively participate. So our intent is aggregating minority- and women-owned businesses, just to make sure that we’re building the partnership ahead of time; we are vetting them ahead of time and building relationships, and they are credentialed at the level of quality that I would have expected to buy when I was in the buyer seat.

These relationships are not formed at the point of the RFP, so that the institutions and corporations can rely on the fact that the servicing entity is qualified and can participate at scale.

While I was at Cushman, we came to a point where we felt that it was important that the ecosystem needed a bit of a boost, and that it was a combination of both women and minority, essentially underrepresented groups that should be able to participate at scale, and benefit financially, as opposed to, in the past, sort of participating as one-offs.

I see from your bio that you held many positions with Corenet New York (an association of executives who specialize in corporate real estate). So I want to ask you the dominant question right now: To what extent are corporations reducing their footprints in response to workers wanting to work from home or work remotely. Is that going to be a big thing going forward?

Wu: I’m not sure anybody even with a crystal ball has an answer to that question. Corporate and commercial real estate are a function of what companies need to do in terms of generating revenue. Depending on who you ask and what day of the week that you ask the question, you’re going to get a different answer.

When you think about diversity, not only is there supplier diversity, there’s also workforce diversity. I think both are needed. There are a lot of folks who might work better in a remote fashion. And then there are others who can’t innovate and be productive and work in a team to build products and to collaborate without being together to build relationships and trust.

We’re in this interesting space where all of these issues are a big mashup. But then at the same time, I think that the whole diversity conversation is even more important because of that.

I heard that you are working with the Port Authority of New York and New Jersey and with the UN Women’s Center. Can you explain what you are doing in those places?

Jodi Pulice: We represent the United Nations, and we recently closed a deal with UN Women, which is an agency of the United Nations. And we recently won the RFP for all of the retail at the main Port Authority Bus Terminal. Which is very interesting: They only wanted a minority- and a woman-owned company to bid for that position as the exclusive agent for the retail at the bus terminal. So they saw the need to have MWBE participation in their leasing. We won the bid, and we were selected over some major, major companies.

I think it was John Oliver who described the bus terminal as the worst place on the planet. It’s large, it’s confusing. Sounds like you guys are trying to make it a little less so.

Pulice: It’s so rewarding to me after being in the business for quite a few years to see the creativity and the amazing amount of energy that our people have. Just to have the opportunity to have various types of retailers come in, and some of them have never even been offered some of the spots where 250,000 people walk through every single day. And those 250,000 people are quite diverse.

Perhaps they could enjoy food from another country. Or meet up with someone and understand a different culture. It’s been an eye-opener.

Yeah, we’ve heard a million times over that the Port Authority Bus Terminal is everything that you said from a negative sense. But our true idea is that if those retail locations are occupied by things that the people who use the terminal could relate to, we’ll be well on our way to making that terminal a much better place than what you’ve heard about in the past.

Turning back to Pay. Looking at your previous experience at TD and AmEx, what can you tell us as far as the impact working from home and the like, and COVID, are having on the finance industry, and what should we be concerned about going forward?

Wu: When you look at what’s happening with COVID, I am one for making sure that you have parts to work with. When I ran, say, real estate for the Americas for AmEx, AmEx was in the early stages of its mobile journey. We scaled the mobile working program that at the time was called Blue Work — it’s called something else now — across its footprint in the Americas. That actually allowed AmEx to be much more agile when COVID hit.

I’m not taking credit, because obviously there’s a new leadership in place there. But the journey that companies take, by embracing different ways of working over time does help shape their ability to address certain problems.

This interview originally appeared as part of Commercial Observer’s Tenant Talk newsletter. Please consider subscribing to that or to other newsletters here.