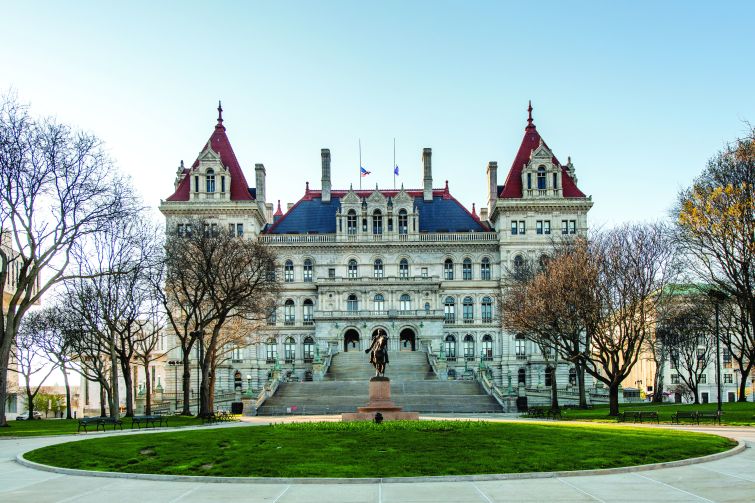 Reaching a state budget deal with lawmakers was supposed to be the hardest part of the year. Gov. Kathy Hochul could barely bask in the passage of her $220 billion budget after an additional six days of closed-door negotiations with legislative leaders and a marathon weekend of votes, when her lieutenant governor was arrested for receiving illegal campaign contributions and the worst subway shooting in the past 40 years occurred on the same day.

Hochul warned New Yorkers on April 12 about an “active shooter situation” with a suspect still at large and lamented the rise in subway violence that could imperil commuters’ return to their offices. Hours later, she accepted Lt. Gov. Brian Benjamin’s resignation, writing in a statement, “it is clear to both of us that he cannot continue to serve as lieutenant governor.”

The following morning, Hochul was still grappling with the fallout of both events. Just a week ago she stood by her second-in-command saying she had “full confidence” in her running mate despite rumors of a federal investigation into his campaign spending. Now she will have to replace him.

“I want New Yorkers to have complete confidence in their government, and let them know that I’m going to keep delivering for them,” Hochul said on WNYC’s “Brian Lehrer Show” the day after Benjamin resigned. “I’m going to find a real partner who will continue to do the same as well. So we need a little bit of time.”

The state budget was supposed to provide a surge of momentum for the governor’s agenda ahead of the Democratic primaries. Instead it was overshadowed by incomprehensible violence and unfettered corruption occurring within her administration.

But the allocation of nearly a quarter of $1 trillion in new spending will have lasting effects on New York’s economic recovery, housing shortage and quality of life. The budget includes $600 million in financing for a football stadium for the Buffalo Bills, significant rollbacks of the state’s bail reform laws that passed a mere three years ago, new money for vulnerable New Yorkers whose incomes suffered during the pandemic, as well as new rules that will benefit the state’s beleaguered food and entertainment industries.

Not everything Hochul wanted was included in this go-around. Much of the governor’s housing agenda, including an affordable housing tax abatement that developers wanted, was taken out of budget bills and a measure that would mitigate carbon emissions from buildings throughout the state was scrapped too because it didn’t have a financial component to it.

Housing and environmental issues will likely predominate the second half of the legislative session that ends in mid-June, just two weeks before the primary. Hochul and state lawmakers will have two months to tackle some of the state’s most intractable problems concerning the climate crisis, homelessness, gun violence and an acute housing shortage that threatens to displace longtime New Yorkers.

She may even have a new lieutenant governor lined up before the voters have their say at their polling stations.

When the governor proposed her budget in January, she framed it as an opportunity to rejuvenate the state’s recovery and aid its most vulnerable residents.

The centerpiece of Hochul’s housing plan allocated $25 billion to fund the construction and preservation of 100,000 below-market units over a five-year period. About one-tenth of those units would feature supportive services. That sum made it into the final budget and so did an $800 million infusion into a rental aid program for tenants who suffered financial hardships during the pandemic.

“I have a strong commitment to achieving affordable housing for all,” Hochul said April 12 on WNYC. “We have programs going into schools; we have a real mental health crisis. I have family members who have dealt with substance abuse. I know these challenges personally.”

Funding for tenants may have the most impact on the lives of everyday New Yorkers, if they can ever get the money. State leaders were compelled to refuel the emergency rental assistance program (ERAP) after the Legal Aid Society sued to reopen it, but the portal ran dry by October 2021 and the state’s eviction moratorium expired three months later. Some 315,000 tenants applied for ERAP funding as of March and were awaiting decisions then as well. Another 400,000 tenants who haven’t applied could be eligible to tap into the fund.

“We are grateful to see the commitment of $800 million to address the short-term emergency assistance needed by New Yorkers who have fallen behind on their rent during the pandemic, but we wish far more funding would have been included to meet the urgent need,” Jennifer March, executive director of Citizens Committee for Children and a co-convener of the Family Homelessness Coalition, said.

Hochul’s late addition of changes to the state’s bail reform law surprised lawmakers and contributed to a weeklong delay in negotiations before Senate and Assembly leaders reached an agreement. The measures, which were pushed by New York Mayor Eric Adams for months, would give judges more discretion in setting bail for a broader array of misdemeanors and non-violent felonies and detain defendants who have committed repeat offenses.

Business leaders lauded the move. Partnership for New York City President Kathy Wylde, whose group represents hundreds of CEOs across the city, said addressing public safety was among the top priorities for CEOs in the budget.

“The budget includes many of the measures that Mayor Adams has said he needs to reduce crime, curtail gun violence and move homeless and mentally ill people into appropriate treatment and accommodations,” she said.

The state’s food and entertainment sectors also scored victories in the final budget deal. Last year, the legislature legalized recreational marijuana after a decade-long campaign from criminal justice advocates. This year’s drug-related allowance didn’t have as long of a waiting period.

Also, then-Gov. Andrew Cuomo permitted restaurants and bars to serve takeout drinks to help them stay afloat during the pandemic but the order expired last June. Lawmakers have now revived the order for a three-year period and tweaked it so establishments must serve food alongside to-go booze orders.

The debate over what constitutes a “substantial food” item continues to play out — soup and sandwiches are fine but chips and candy are not — but restaurants are happy to get what they wanted.

“The popular policy’s return to the Empire State will serve as an important lifeline to countless restaurants in all corners of the state and allow New Yorkers to once again have wine delivered to their front door or to pick up a margarita with their takeout food from their favorite neighborhood restaurants,” Andrew Rigie, executive director of the NYC Hospitality Alliance, said.

State leaders also signed off on a measure that could eventually lead to a new casino in New York City. The provision would allow the state gaming commission to request bidders submit an application for one of three licenses to run a parlor with card games and slot machines. The state currently has four casinos upstate as well as two racinos in Queens and Yonkers that only offer slot machines.

The two racinos — race tracks with slot machines — are likely to become full casinos but the third location could become contentious. Lawmakers are already opposed to siting one in Manhattan or in Coney Island, Brooklyn.

“We are only at half-time in the process, and it’s too soon to tell what will happen in the second half,” said Evan Stavisky, a lobbyist with the Parkside Group who specializes in gaming issues. “The community advisory process does not block a Manhattan casino, but makes it far less likely to win approval.”

Hochul couldn’t keep all her promises and some significant budget proposals didn’t make the final cut.

This year, real estate lobbyists targeted the renewal of an affordable housing tax incentive that would make it financially viable to build residential projects that offer a portion of their rental units at prices below the market rate. It was for decades known as 421a, until it was tweaked and renamed under Cuomo as Affordable New York. Hochul proposed updating the incentive, which she now calls 485w, and extending it beyond June 15 when it was scheduled to expire.

Developers were optimistic the measure would pass as the city faced an acute housing shortage. But progressive lawmakers argued the plan was too similar to the current version, which hasn’t delivered on the number of affordable units that were promised. Instead Hochul scrapped it.

“It’s fair to say the rent is too damn high and it was on track to get worse with the governor’s housing tax abatement proposal,” Bronx Assemblyman Kenny Burgos tweeted. “That is why I’m heartened that the speaker stood with our conference to ensure that a program that is already responsible for New York becoming the most unaffordable housing market in the country isn’t folded into the budget without fair, open debate on its implications.”

Real estate leaders have been forced to recalibrate. The last time the incentive was renewed in 2016, real estate owners and trade unions disagreed over the prevailing wage requirements for construction sites in a stalemate that lasted months.

Now developers, trade unions and residential building workers agree that the tax abatement should return but they haven’t articulated a strategy on how to get the incentive to pass a legislature full of lawmakers who want to see it expire.

Instead, they’ve leaned on dire warnings about inaction in general. Building and Construction Trades Council President Gary LaBarbera, SEIU 32BJ President Kyle Bragg and Real Estate Board of New York (REBNY) President James Whelan, for instance, issued this joint statement last week: “A program like this also creates opportunities for much-needed family-sustaining jobs and housing New Yorkers need. Without it, the crisis will worsen as the city fails to produce enough housing to keep pace with population and job growth, and working people will pay the price.”

One option would be to continue to revise the abatement so it provides greater levels of affordability or additional incentives that would nudge developers toward building in areas of New York City that were recently rezoned. Another option would be to link the measure with something that progressives would like, such as rules that would severely limit tenant evictions, which didn’t make it into the budget either.

“The idea of linkage is inevitable. Laws aren’t considered in a vacuum, there’s going to be horse trading,” Daniel Bernstein, head of the affordable housing and tax incentives unit at Rosenberg & Estis, said. “We’ve seen historic linkages for incentives for development and other legislative initiatives before.”

The governor may also look to reintroduce a law banning oil and gas hookups at newly constructed buildings by 2027. The proposal follows New York City’s new rule and is part of the Hochul administration’s ambitious climate agenda, which would cut greenhouse gas emissions 40 percent by the end of the decade.

A coalition of energy groups have lobbied against the bill but real estate leaders have been largely supportive of converting power that flows to city buildings from natural gas to electricity.

“This proposal appropriately balances the need to reduce emissions from buildings with the ability of the development and supplier community to efficiently accomplish this goal,” a REBNY spokesman said. “We remain hopeful that legislation in line with these building code changes can be agreed upon before the end of session.”