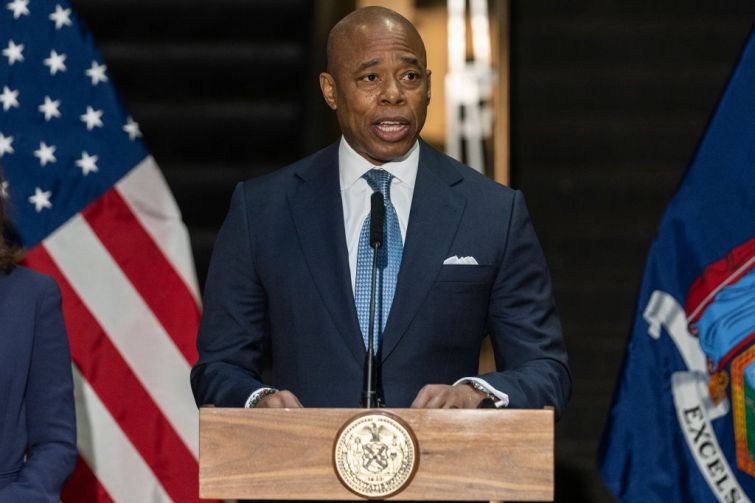 After Frank Robert James allegedly fired 33 rounds on the N line in the 36th Street subway station in Sunset Park, Brooklyn, wounding at least 23 people, 10 of them by gunfire and others with an explosive device last Tuesday, New Yorkers reacted with heavy emotions about swiping their MetroCard until he was caught.

James, 62, was apprehended by the New York Police Department the following afternoon near ​​St. Marks Place and First Avenue in Manhattan’s East Village, facing life in prison if convicted on federal terrorism charges.

“We were able to shrink his world quickly to where there was nowhere left for him to run,” NYPD Commissioner Keechant Sewell said at a press conference.

Still, the man with a criminal record — but no felony convictions — evaded capture for 30 hours. Some might question if this could shake confidence in Mayor Eric Adams’ leadership roughly 100 days into his administration.

Adams added 1,000 cops to patrol the 472-station subway system within the first month of his administration and pledged to double that number immediately after the shooting.

A former NYPD captain, Adams outshined his opponents in the Democratic primary last summer by running on a platform that advocated law and order in a city that seemed inundated with crime. He also billed himself as a leader that the NYPD could depend upon for support as an ex-cop himself.

Leaders in real estate expressed confidence that more law enforcement would lead to greater reassurance in the safety of the subways and would eventually bring people back to offices, though it would not happen overnight.

“The mayor and [the Metropolitan Transportation Authority] have put a significant emphasis on public safety and quality of life issues that have kept New York on the path to long-term economic recovery following the pandemic,” Real Estate Board of New York President James Whelan said in a statement last Wednesday. “Yesterday’s event emphasizes that stakeholders must continue to focus on these issues and collaborate to keep our city moving forward.”

For Mary Ann Tighe, CEO of the New York tri-state region for CBRE, speculation over when and how commuting patterns would bring people back to office buildings has not changed.

“It was business as usual at [World Trade Center last] Tuesday morning. Everybody was fine and calm as they were everywhere else in the city, except sadly in Sunset Park,” Tighe said. “I think that in the larger sense, what impacts the leasing market is the fact that people are still trying to basically have confidence in how they’re going to occupy their office space.”

That comes down to determining which employees need to work in-office and those whose jobs require less face-to-face interaction.

Future Today Institute CEO Amy Webb, who founded the research firm that produces reports on tech trends, took to Twitter immediately after the shooting to announce that her firm would restrict the use of all work-related use of the subway until further notice, and in the meantime would provide a stipend for car services.

Webb soon deleted the tweet, citing reactions from “trolls,” and didn’t respond to a request for comment from Commercial Observer.

Additional measures such as limiting the size of bags allowed past turnstiles that may dissuade New Yorkers from returning to trains was out of the question for MTA Chair and CEO Janno Lieber, who as a former Silverstein Properties executive had been responsible for much of the new World Trade Center campus. Lieber spoke on MSNBC’s “Morning Joe” last Wednesday.

“What we’re not going to do is create an environment where people can’t go about their business, and create something that’s impractical,” Lieber said during the interview. “We’re still waiting for everybody to come back to the office. It’s no secret that is part of the equation, but we want New Yorkers to feel safe and to be safe.”

This comment seemed to indicate that Lieber is not on board with Adams’ statement Tuesday afternoon in which he agreed with WCBS-TV anchor Maurice DuBois that metal detectors in subway stations or other similar measures would be enacted.

Mitchell Moss, professor of urban policy and planning at New York University as well as director of the Rudin Center for Transportation, said he supports any effort by the city and the MTA to boost law enforcement presence and surveillance.

“The New York City subway system relies on trust,” Moss said in an email. “The rider trusts that the MTA will operate safe, reliable trains; but of greater importance, we trust that the people next to us, on the subway platform or on a train are not terrorists, deranged or trigger-happy killers. Clearly, the system of trust is not sufficient in the 21st century. The subway shooting in Sunset Park will not fade away but will be a part of the new safety challenges that the MTA and New York City must address. We do not need politicians offering their ‘thoughts and prayers’ but cameras and cops on every platform and train.”

Transport Workers Union Local 100, which represents most subway and bus employees, held their long-standing position that while more cops quell the violence, the visible impact will not be immediate.

“It’s going to take time,” agreed Pete Donohue, a spokesperson for TWU Local 100. “No one was under the illusion that police officers alone would solve the complex issues of crime, homelessness and mental illness. It’s a start. It would be unfair to say the mayor’s efforts aren’t working. He’s only been in office about 100 days. The mayor and governor have made transit safety a top priority and are working together. Compared to the recent past, that’s reason for cautious optimism.”

The New York City Transit system carried over 5 million riders per day prior to the pandemic. Since March 2020, when ridership was cut by 90 percent due to lockdown, the MTA began recording a slow recovery: this time last year, ridership had risen from its pandemic low to 30 percent and now stands at 60 percent of pre-pandemic ridership.

Lieber assured the public last Wednesday that most of the crime is attributable to a lack of regular ridership and an “erosion of public behavior,” and that those are issues that law enforcement can solve with boosted presence.