The Google Effect: What Happens When the Giant Moves In?

Commercial rents go up, for one thing. At least that's what happened when Google set up shop in Midtown South. 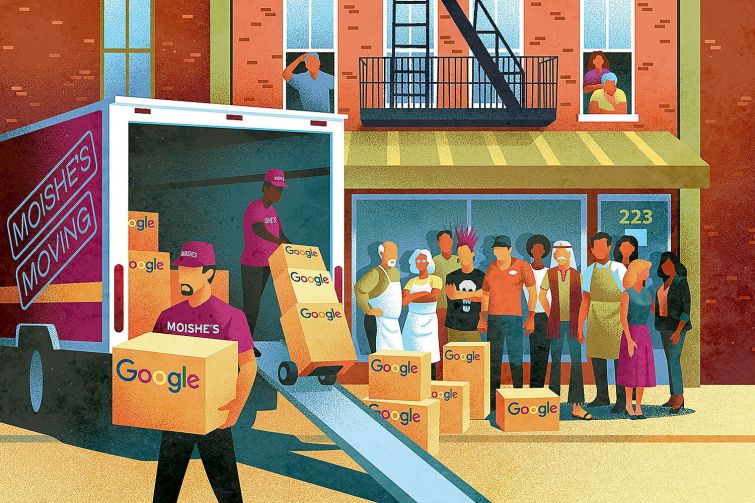 Nearly 12 years ago, Google loudly announced its permanence in New York City by paying nearly $1.8 billion for 111 Eighth Avenue, one of the earliest signals of big technology companies’ growing appetite for office space in the Big Apple. At that time, the deal was the second-largest full single-asset sale ever in New York City.

Since the December 2010 purchase of the 2.9 million-square-foot building — a former transit authority hub for train maintenance and other operations — that area of Manhattan where Chelsea meets the Meatpacking District has become a veritable Googleplex. In 2018, Google bought Chelsea Market at 75 Ninth Avenue from Jamestown for $2.4 billion. Other buys followed. Just last week, the company closed on its $2.1 billion purchase of the south portion of St. John’s Terminal at 550 Washington Street.

Along with this expanding presence has come the “Google effect.”

Since Google purchased 111 Eighth Avenue, tech firms have signed 126 leases of at least 25,000 square feet each, totaling 14.8 million square feet, in Midtown South. A full 37 properties were built or redeveloped in the same neighborhood, totaling 6.6 million square feet. Investment sales averaged $11.6 billion per annum, compared to $4.6 billion from 2002 to 2009, according to a report from Cushman & Wakefield.

The jump over the past decade is striking. And Google’s plans to continue buying up its office space rather than leasing it, could mean further changes.

“Asking rents in the Chelsea Market area skyrocketed since Google purchased the space at 111 Eighth Avenue, [and asking rent] increased by roughly 114 percent,” said Colleen Wenke, president and COO of Taconic Partners. Taconic, New York State Common Retirement Fund and Jamestown sold 111 Eighth to Google. “So there are very strong metrics that can speak to what Google did to the neighborhood.”

Indeed, the tech giant and its corporate parent Alphabet served as a draw for other tech tenants to the area, including Facebook, SAMSUNG, Netflix and Microsoft. The technology, advertising, media and information sector accounted for more than 75 percent of leasing activity through the first quarter of 2022, followed by professional services at 10.2 percent, according to C&W’s report.

As a result, Midtown South rents surpassed Midtown’s for the first time this year, according to a first-quarter report from brokerage Colliers.

Per Colliers, Midtown South’s average asking rent hit $79.67 per square foot in the first quarter of 2022, an 11.6 percent annual increase and above Midtown’s average of $77.95 per square foot.

From the retail side, “coming out of COVID, in sort of the new age of retail, there are a few corridors and neighborhoods in [New York City] that are real beneficiaries of the momentum. One of them is Williamsburg, the other one is SoHo, and the other, for sure, is Meatpacking,” said Brandon Singer, founder of Retail by MONA, the retail brokerage currently marketing space at 875 Washington Street near Chelsea Market. “And the reason being is just the affluence. The young customer that will be working when they come back to work at Google has so much disposable income.”

The momentum of the Google effect keeps building too. During the third quarter of 2021, prospective tenants were looking for 6.5 million square feet of office space in Midtown South, which includes Chelsea, Flatiron District, Hudson Square, the Meatpacking District and NoHo/SoHo — a 64 percent surge compared with the first quarter, according to an analysis by KPG Fund and Newmark.

Google made a plan four years ago to more than double the number of employees in New York — its biggest workforce outside California — and the company is already ahead of that plan with around 12,000 Googlers in Gotham .

“Because New York is the place people want to be, we’re super excited to continue building it out,” Google CFO Ruth Porat said at the ribbon-cutting ceremony for the rooftop park at Pier 57 on April 18. The new rooftop park sits atop a 633,000-square-foot pier that includes 350,000 square feet of commercial office space for Google. A Google spokesperson declined to comment beyond Porat’s remarks at the ribbon-cutting ceremony.

Not everyone is thrilled by the Google effect.

“Google coming to Midtown South represents everything that is wrong. There’s no balance in any of the communities for housing and for community so the community can thrive,” said John Mudd, president of advocacy group the Midtown South Community Council. “[Google is] not balancing out the neighborhoods; medium wage earners can’t afford to live here.”

With the Google effect continuing to manifest, what neighborhood will be the next to be impacted? If you ask the developer that sold 111 Eighth Avenue to Google, its executives would probably say the Lower East Side.

Taconic Partners is developing the mixed-use, 1.9 million-square-foot Essex Crossing on the Lower East Side along with L+M Development Partners, BFC Partners, Goldman Sachs’ Urban Investment Group and The Prusik Group on land previously owned by the city. They’re hoping to bring the Google effect to the Lower East Side, albeit with a different company leading the transformation, in this case Verizon.

“If you look at the demographics of those neighborhoods, they’re pretty similar,” said Jane Luger, a vice president at Taconic. “Chelsea and the Lower East Side are both established neighborhoods that have tons of culture, lots of food and beverage options, and places people want to spend time. Both are places where the millennial workforce is either in very close proximity or in that neighborhood already.”

“The plan for the Essex Crossing project broadly has never been to create a new neighborhood,” said Dan Alger, a co-head of Urban Investment Group. “Instead, it has been to positively contribute to an already vibrant community, and do so by reactivating the sites that have sat vacant since the mid-1960s.”

Verizon moved hundreds of staffers to Essex Crossing; the telecom giant nabbed nearly 143,000 square feet on the third, fourth and fifth floors of 155 Delancey Street, in the wider base of the new rental tower called The Artisan, along with branding and signage on the commercial facade of the building.

“There was definitely an internal driving force or factors that [Verizon] wanted to reinvent themselves and plant their flag somewhere where the marketing group could say, ‘This is where we’re going. This is going to be our hub in New York,’” said Drew Braver, a managing director at Cushman & Wakefield, which brokered the deal on behalf of Verizon.

“It very much felt like a similar story to what we saw in our Chelsea-Meatpacking area where we had early-days relationships,” Wenke of Taconic said.