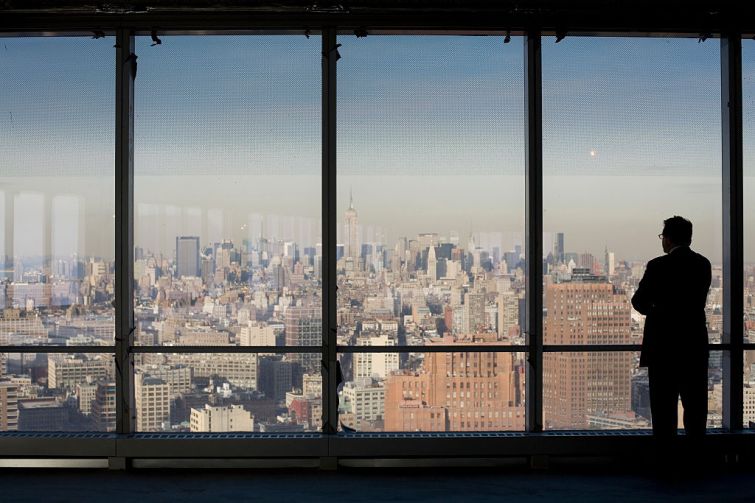 View from the 40th floor of 7 World Trade Center. The building, owned by Larry Silverstein's development firm, is the first of the World Trade Center buildings to be rebuilt. It was certified as New York City's first "green" office tower. 7 World Trade was designed by Skidmore, Owings and Merrill. Photo: James Leynse/Corbis via Getty Images

The two transactions are part of four recent deals covering more than 104,000 square feet at the 52-story building, leaving only the 40th floor of the property empty. Asking rents were $90 per square foot, according to landlord Silverstein Properties.

“It’s very gratifying to see long-term tenants renew and new tenants join us in the building,” Silverstein’s director of leasing Jeremy Moss, who represented the landlord in-house in the four deals, said in a statement. “As companies adapt to post-pandemic life and plan for their future, well-located, accessible, sustainable and high-tech buildings like 7 WTC will continue to be their workplace of choice.”

Capstone closed on its 13-year deal for the 40,000-square-foot expansion on the 32nd floor of the tower — the first skyscraper rebuilt on the World Trade Center site after the Sept. 11 attacks — in the last three weeks, according to Silverstein. The firm will relocate from 24,000 square feet on the 30th floor in 2023, according to the landlord.

Cushman & Wakefield’s Robert Lowe and Jonathan Fein represented Capstone in the transaction. Lowe and Fein did not immediately respond to requests for comment.

Meanwhile, Mansueto, which first moved into the building in 2007, renewed its 40,000-square-foot lease for another 11 years, according to the landlord. CBRE’s David Glassman handled the deal for Mansueto. CBRE did not immediately respond to a request for comment.

The tax law firm Kostelanetz & Fink also signed on for another decade in 18,158 square feet on the 34th floor, having been at the building since 2007, according to the landlord. The lease for the 1.7 million-square-foot building, home to Moody’s Corporation, Skidmore, Owings & Merrill and Silverstein’s own offices, closed in March. Newmark’s Brian Cohen and Eric Zemachson handled the deal for the tenant, and Cohen declined to comment.

In the smallest deal, IT provider UPSTACK relocated from Paramount Group’s 745 Fifth Avenue to 5,400 square feet at the Silverstein tower in a seven-year lease, according to the landlord. The firm closed on the transaction at the end of 2021 and represented itself, according to Alexander Cole, the firm’s senior vice president of marketing.

“We were looking for a new space to accommodate our growing team and 7 World Trade checked all the boxes,” Cole said. “It really was [the building’s] proximity to the various airports in the area, because we do have a lot of visitors going through town [and] decreased commute times, [though] the amenities offered by [7] World Trade were certainly a plus.”

In total, all four deals bring the property to 97 percent leased, according to Silverstein.

Update: This story has been updated to include Capstone’s current square footage at 7 World Trade Center.