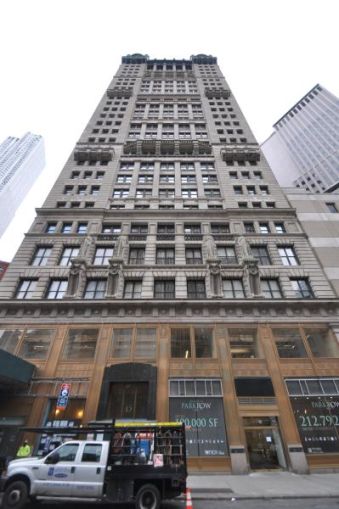 A new, two-floor eatery is headed to the former site of J&R Music World in the Financial District.

The creator of the Plaza Hotel food hall, Todd English, inked a 20,000-square-foot lease at the base of 15 Park Row, a mostly residential building across from City Hall Park, between Ann Street and Theater Alley. Asking rent was $2.5 million a year, the New York Post first reported. The lease is for between 14 and 16 years, according to a source with knowledge of the deal.

The storefront at the base of the apartment tower could become a new food hall, like the eponymous one English created at the Plaza Hotel or similar to the plans he tossed for a spot in Chelsea. It might also be another location for his Mediterranean eatery Todd English’s Olives, which has an outpost in Las Vegas, according to the source.

English’s new deal is for J&R’s former location, which shut down nine years ago. The 31-story tower, which now holds mostly apartments, was owned by the “J” and the “R” of the iconic home entertainment retailer, Joe and Rachelle Friedman, until last year, when the couple sold it to Atlas Capital Group for $140 million, The Real Deal reported.

Meridian Capital Group arranged $109 million in financing for the purchase at the time, and the firm charged Meridian Retail Leasing’s James Famularo, Ben Biberaj and Elliot Wygoda to broker the building, according to a flyer for the property. Famularo confirmed that his team was marketing the space and signed a deal for it, but declined to comment further.

The establishment, which reportedly will be operated by an investor group backing English, has been vacant since J&R Music shut down in 2013, the Post reported. Prior to being known for the music establishment, the building was one of several in the area occupied by newspapers, and the Associated Press was a tenant in the early 1900s, according to the property’s website.