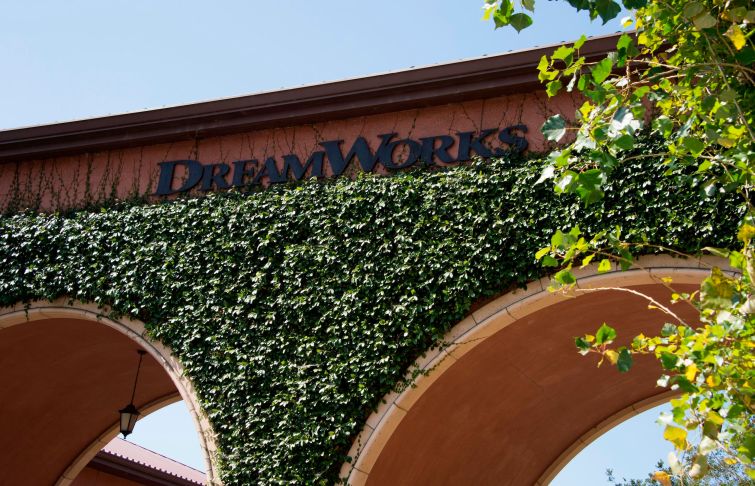 The exterior of DreamWorks Animation in Glendale. photo: ROBYN BECK/AFP via Getty Images

The seven-year loan was a direct deal, with no brokers involved.

In November 2021, Brookfield REIT made its studio debut when it announced plans to buy the seven-building headquarters campus — the birthplace of “Shrek” and “Kung Fu Panda,” plus other beloved, animated characters — for $327 million.  Brookfield REIT officials declined to comment.

Sellers Hana Asset Management and Ocean West Capital Partners had previously purchased it for around $297 million in 2016, per property records.

The sprawling property extends out 15 acres, totals 497,403 square feet and includes production and motion-capture studios, green rooms, a theater and office space. Built specifically for DreamWorks, the tenant still has 12 years left on its lease. Today, it houses 1,200 employees — including 3D animators and engineers —who enjoy amenities that include a helipad, ping-pong tables and a medical clinic.

Christine Boyd, principal at Apollo Global Management, led negotiations in the seven-year deal. Apollo was drawn to the Brookfield REIT sponsorship, and because the firm is a repeat client, Boyd said.

“We love working with borrowers that we repeatedly do business with, and Brookfield’s experience and balance sheet is key,” she said. “Then, specifically speaking to the real estate side of the transaction, we really felt it fit with our investment thesis with the strength of the entertainment industry in L.A. and just our overall view that things in L.A. are going to continue to go in the right direction with respect to office usage.”

The DreamWorks campus sits in a premium spot at 1000 Flower Street, with direct access to Glendale’s Media Triangle. The area is home to several other production studios and campuses, including many Walt Disney properties.

Boyd, who is based in Apollo’s San Francisco office,  described the DreamWorks campus’ location as  “irreplaceable, and in a really unique campus setting with outdoor space, and other amenities that are important in the post-COVID world.”

“With the mask mandates going away, it’s interesting to see more people downtown in San Francisco and L.A.” she said. “I think  that’s going to translate to more office usage over the coming months here.”

On the East Coast, Apollo made a studio bet during the depths of the pandemic as the senior lender behind Hackman Capital Partners and Square Mile Capital Management’s purchase of Silvercup Studios in New York City in November 2020.

And only last week, it closed another sizable deal, this time providing a $178 million refinance for Rubenstein Partners’ mixed-use building at 25 Kent Avenue in Williamsburg, Brooklyn.