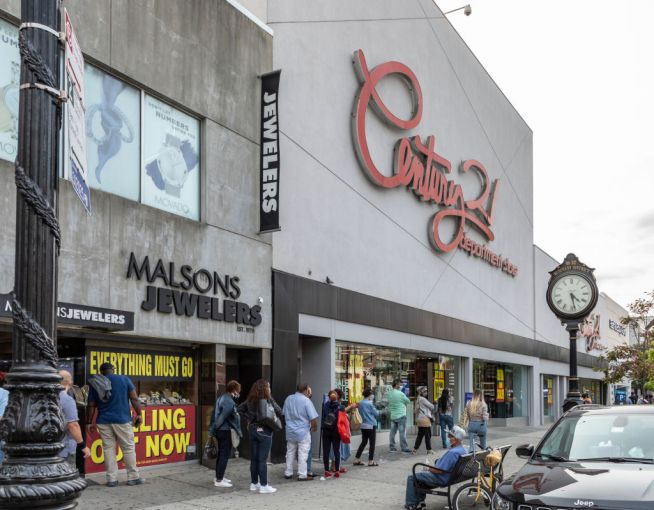 The owners of Century 21 plan to demolish its longtime Bay Ridge home and replace it with a larger retail development. Photo: Sam Aronov/Pacific Press/LightRocket via Getty Images

The owner of the department store Century 21 filed for permits to demolish its iconic Bay Ridge outpost, ending hopes that the retailer would return to its Brooklyn roots following its recent bankruptcy.

ASG Equities, owned by the Gindi family which also owns Century 21, plans to destroy the 170,000-square-foot vacant retail buildings between 448 and 460 86th street, according to demolition permits filed with the city’s Department of Buildings. In its wake, ASG plans to build a larger retail development for more than one new retailer and has already been in talks with tenants in the food and beverage, fashion and retail sectors, according to George Karnoupakis, head of asset management for ASG.

“We intend on rebuilding a Class A retail new development to bring life back to 86th Street,” Karnoupakis told Commercial Observer. “These buildings serviced the needs and goals of Century 21 for more than 60 years. In order to bring fresh retail to the block, the buildings need a major uplift. The family intends on attracting first- [and] best-class tenants to the neighborhood.”

The 150,000-square-foot development could cost as much as $45 million, though that estimate will change closer to the start of construction, said RIPCO Real Estate‘s Gene Spiegelman, who is marketing and leasing the building along with colleagues Ben Weiner, Morgan Singer and Chris Walther. The owners plan on pre-leasing the property to new retailers and announce who will take the space in the next five to six months, Spiegelman said.

The permits are the first step in a long construction process, and the buildings won’t be demolished any time soon, Karnoupakis said. While Karnoupakis didn’t yet know when the new development would be completed, he said the site has received “significant” interest and would serve the community when finished.

Century 21, which had occupied the lot for around 60 years, filed for bankruptcy in September 2020 and closed its 13 stores in New York City, including the Bay Ridge location. The retailer announced it would open in South Korea in fall 2021 and planned a comeback in the New York metro area, but was sparse on the details and it’s unclear if its international outpost ever materialized.

Century 21 did not respond to a request for comment, and Karnoupakis, who works for the real estate arm of the Gindi family, said he wasn’t involved in the department store’s business.

With the filing of these permits, it seems Bay Ridge, where the retailer was founded in 1961, is finally out of the iconic New York retailer’s plans.

But Timothy King, managing partner of SVN CPEX Real Estate, who is marketing a nearby property at 531 86th Street, said the redevelopment would likely be a boon for the neighborhood.

“Eighty-Sixth Street in Bay Ridge is one of the premier retail corridors in the five boroughs,” King said. “[Century 21’s] departure left a void in the neighborhood [and] I’m pleased to hear that the Gindi family has plans to develop the property they own on 86th Street. I have no doubt that the finished product will enjoy a tenant roster that will benefit both the neighborhood as well as ownership.”

After the department store decided not to reopen its Financial District flagship location, ASG started looking for tenants to replace the retailer in April last year, CO reported at the time. In another hit, its landlord there, Mayore Estates, sued the chain for $3 million in back rent.

Century 21 told the Brooklyn Eagle last year that it did not yet know where or when it would open a brick-and-mortar location in New York or the tri-state area. The department store blamed the pandemic and the store’s insurers for its business woes, the Eagle reported.

Councilmember Justin Brannan, who represents Bay Ridge, said he was working to attract a good tenant to the area with the goal of making 86th Street “better than ever.”
“The importance of 86th Street as a retail shopping destination and hub of local employment simply cannot be overstated,” Brannan said in a statement. “We are all hands on deck working to attract great commercial tenants that will help stimulate and ensure our neighborhood’s small business recovery and revival.”
Update: This story has been updated to include a statement from Councilmember Justin Brannan.