MTA Banking on Major Return to Office by End of Year 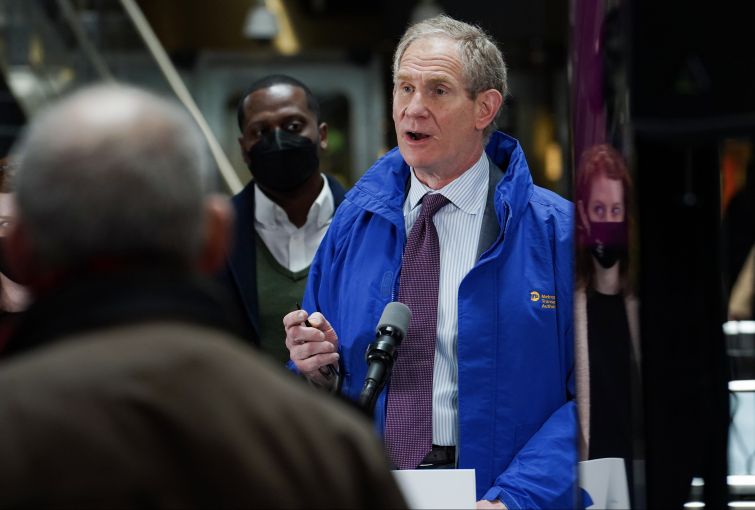 Transit leaders are giving up on the idea that New Yorkers are too concerned about COVID-19 to board the subways once more for work.

Metropolitan Transportation Authority Chair Janno Lieber said that the agency expects a surge in ridership after the Partnership for New York City found that 61 percent of Manhattan employers are going to require daily, in-person attendance for 50 percent of staff by the end of March.

“We were at about 60 percent of pre-COVID ridership on an apples-to-apples, day-by-day [basis]. We said, you know, omicron set us back a little bit. But we’ve come roaring back,” Lieber, who is also the MTA’s CEO, said during an appearance on NY1’s “Inside City Hall” program with Errol Louis Tuesday night. “Major businesses think that they’re going to have a lot more people in the office in the next couple of months. So, we do think that ridership is coming back. But, obviously, in order to get back to where we were, we’re going to need a lot more people to get comfortable using mass transit.”

The MTA saw ridership numbers drop as omicron prevented people from working from their offices and from going to restaurants and bars, Lieber said. Lieber added that the agency has data to suggest that people don’t mind boarding trains when it comes to recreation, but they do mind when it comes to going to the office.

“Interestingly … ridership is much stronger in the discretionary periods, on weekends and night times. It’s in excess of 70 percent pre-COVID,” Lieber said. “So the message is when New Yorkers have somewhere to go they’re comfortable using transit. But, you know, obviously, it all depends on the pace of when offices reopen and that’s still a work in progress.”

Through December 2021 and this January, when the city saw high points for omicron infection rates, daily subway ridership hovered between 39 and 65 percent of pre-pandemic norms, when the MTA averaged about 5 million riders per day.

The fact that employees avoid the office but still go out for social activities in their free time was also not lost on Gov. Kathy Hochul, who made similar statements during a Citizens Budget Commission breakfast last week, Commercial Observer previously reported.

“You know what’s fascinating, the restaurants are packed, you can’t get a hotel room, but people don’t want to go into work,” Hochul said last week. “So they’re here. They just want to keep sitting in their apartment.”

“Business leaders tell everybody to come back,” Hochul added. “Give them a bonus to burn the Zoom app and just come back to work.”

Chris Okada, a real estate broker and CEO of Okada & Co., said that businesses have pumped the brakes on their return to the office because of the omicron variant, making negotiations for office leasing even more of an uphill battle.

“Omicron really did set us back, I will say for sure, in all facets of it,” Okada said. “By Thanksgiving of last year, we crawled all the way back up to 40 percent of office workers being in the office. By mid-December, it was back down at 20 percent.”

While the Partnership for New York City seems confident that there will be a considerable return to offices by the end of the first quarter, 22 percent of companies polled said they were unable to provide an estimate of when office attendance will exceed 50 percent and it’s contingent on a decline in COVID-19 cases.