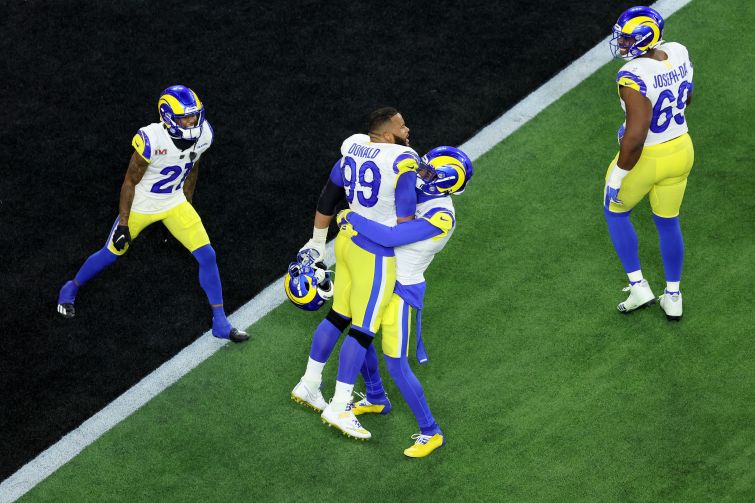 Aaron Donald #99 of the Los Angeles Rams reacts after a sack on Joe Burrow #9 of the Cincinnati Bengals during Super Bowl LVI at SoFi Stadium on February 13, 2022 in Inglewood, Calif. Photo by Gregory Shamus/Getty Images)

Fresh off a Super Bowl title, the Los Angeles Rams are now busy tackling plans for a new training site at a former mall property.

The NFL franchise is in negotiations to purchase the shuttered Woodland Hills Promenade retail center to build a practice facility on the 34-acre site, which is owned by Unibail-Rodamco-Westfield, the Los Angeles Times first reported. The deal could fetch more than $150 million, per the LA Times.

Westfield, which bought Promenade in 1998 for $33.8 million, pushed plans to build apartments, two hotels, 244,000 square feet of retail space, 600,000 square feet of offices and an entertainment center on the property in October 2016, The Real Deal reported at the time. The Los Angeles City Council then approved the proposal in December 2020.

The Rams, who captured the Super Bowl with a 23-20 win against the Cincinnati Bengals on Feb. 13 at their home stadium of SoFi Stadium, have been practicing at California Lutheran University in Thousand Oaks, Calif., with training summer training camps held at UC Irvine. Rams owner Stan Kroenke relocated the franchise to L.A. from St. Louis in 2016. The team previously played in L.A. until moving to St. Louis in 1995.

The Rams did not immediately return a request for comment. Westfield and Eastdil Secured declined to comment.