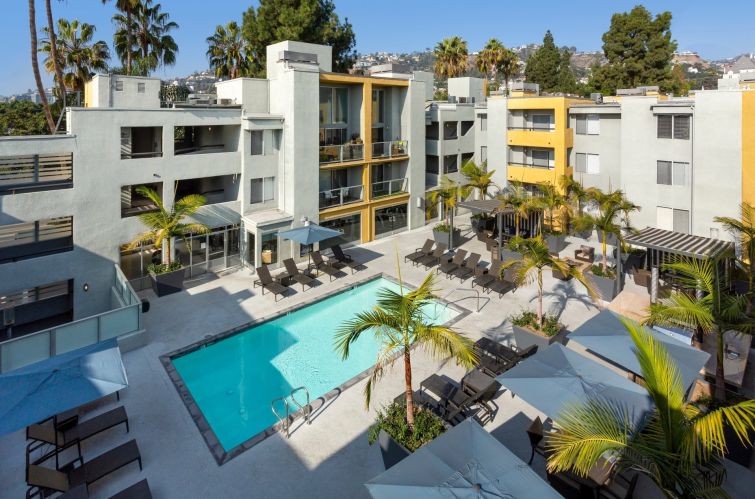 The five-story property was built in 1985 on a 1.7-acre site at 1274 North Crescent Heights Boulevard. photo: Standard Communities

Standard Communities and Faring have again added to their rapidly expanding multifamily portfolio in Southern California.

The joint venture acquired a 130-unit community called The Crescent at West Hollywood, and will change the market rates so that the housing is affordable for middle-income residents. Including a $6 million renovation plan, as well as transaction costs, the deal is valued at approximately $100 million.

Standard and Faring collaborated with the state’s Communities Development Authority and the City of West Hollywood on the deal. It’s the sixth middle-income housing transaction by the joint venture, dubbed Standard-Faring Essential Housing, for a total of more than 1,300 middle-income units.

“With the significant cost of new construction in Southern California, it is critical for public and private entities to come together to create and preserve middle-income housing,” Jason Illoulain, CEO of Faring, said in a statement.

The five-story property was built in 1985 on a 1.7-acre site at 1274 North Crescent Heights Boulevard. It has a pool, , a spa, a fitness center and a movie screening room. Standard’s Chris Cruz said the property is well-positioned to address the city’s “missing middle” housing needs.

“It is rare for a property of this scale to trade in the West Hollywood market, and when a sale does occur, rents usually go up,” Cruz said. “Our public-private partnership will allow income-qualified households earning up to 80 percent of area median income to save as much as $1,200 per month in rent, which shows the power of this program.”

Jeffrey Jaeger, co-founder of Standard Communities, added that West Hollywood has some of the highest costs of living in Los Angeles County.

“We are proud to partner with Faring, the (Communities Development Authority) and the city of West Hollywood to create more housing opportunities for essential workers and middle-income families,” Jaeger said.