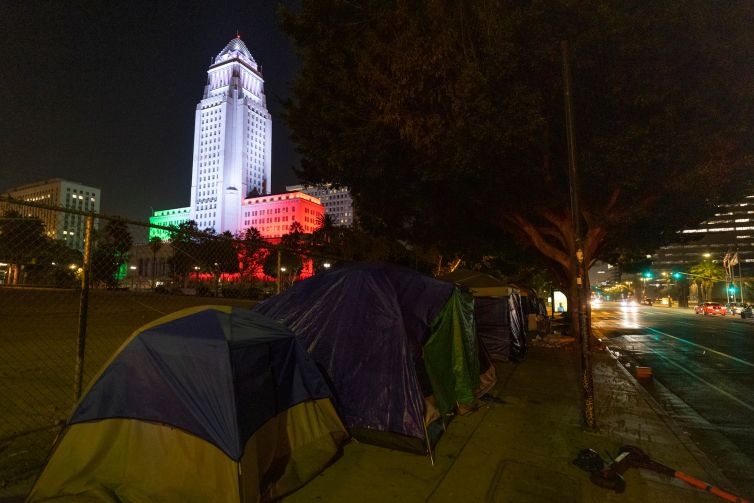 Homeless encampments are seen near the Los Angeles City Hall, which is lit in the colors of the Mexican flag. In 2020, the city saw a 16.1 percent rise in homelessness to an estimated 41,290 people. Photo: David McNew/Getty Images

A taxpayer-funded homeless housing program in Los Angeles is underperforming and slow to produce results, according to an audit released today.

The voter-approved $1.2 billion Proposition HHH bond program from 2016 continues to face rising costs and increased delays, and the review by L.A. Controller Ron Galperin found that it’s unfit to meet the demands of the homelessness crisis.

The program is aimed at creating up to 10,000 units of housing, along with interim shelters and storage facilities. After more than five years, just 1,142 units are currently ready for occupancy, and 8,091 total HHH-funded housing units will be produced. In that time, homelessness has jumped by more than 45 percent in Los Angeles. In 2020, the city saw a 16.1 percent rise in homelessness to an estimated 41,290 people.

The costs for homeless housing have reached baffling levels. For HHH-funded projects currently in construction, the average per-unit cost jumped to almost $600,000 in 2021 — up from $530,000 in 2020. Fourteen percent of those units cost more than $700,000 per unit, and one project in pre-development is estimated to cost $837,000 per unit. Galperin estimates costs could reach $900,000 or $1 million per unit if nothing changes.

Further, HHH projects are taking between three and six years to complete, according to Galperin’s report. At the current pace, 54 percent of all units will not open for another two to four years.

“Although Los Angeles has made some progress with Proposition HHH, it hasn’t been enough,” Galperin said in a statement. “The costs are too high and the pace is too slow to address the tragedy on our streets. My recommendations to improve HHH will make a difference now and should serve as a guide for future homeless housing programs. If the city doesn’t learn from its mistakes, it risks repeating them.”

There are currently 4,347 units in construction, or about 54 percent of the total, and 2,602 units are in pre-development, or 32 percent.