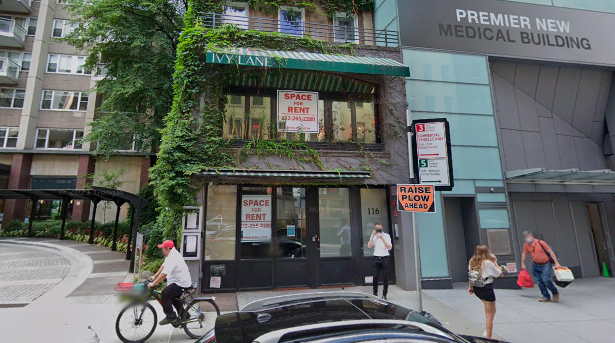 The Upper East Side hasn’t seen the last of Tony Fortuna and his famous steakhouse with the Manhattan restaurateur making good on a promise to return within walking distance of his former location, the New York Post first reported.

T-Bar Steak & Lounge will reopen in a new location, at 116 East 60th Street, after leaving its former location of 27 years — more than 12 blocks to the north at 1278 Third Avenue. It will now serve customers in a 4,500-square-foot building previously occupied by American eatery Ivy Lane, according to the Post. Asking rent in the 12-year lease was about $140 per square foot, a broker confirmed.

The Heller Organization’s Michael Gavin and Joshua Singer represented T-Bar in the deal while the landlord, Solil Management, handled it in-house via Jeremy Modest. Modest did not immediately respond to a request for comment.

“They’re looking to keep their core Upper East Side clientele,” Singer said. “Sixtieth Street has become a real restaurant destination the last few years, so they also want to pick up new business as well.”

Singer said the tenants will be paying a total of about $35,000 per month.

Fortuna told the Post that the new location will have 140 seats — same as the old spot — spread across two floors. However, it will sport a different look when it opens in April or May.

Fortuna could not be reached for comment but the iconic Third Avenue eatery closed in September 2021 because of an issue with its lease, not because of the pandemic, The New York Times reported.