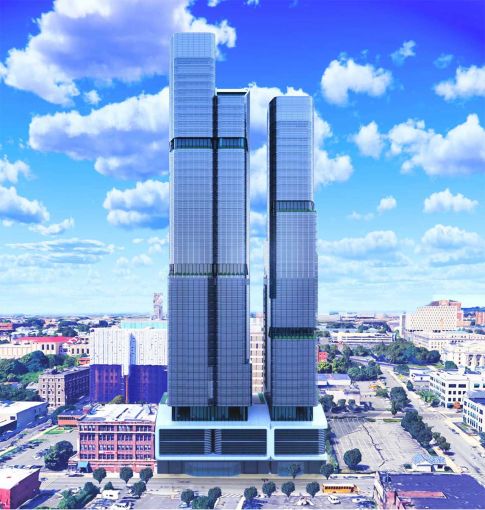 A rendering for The Halo Newark. Photo: INOA Architecture

Parkview Financial provided the loan for Acier’s construction of Phase 1 of The Halo Newark, which will include 297 units spanning 38 stories over a five-level parking structure. The overall three-tower project will be Newark’s tallest building when complete, comprising 949 units.

Lakewood, N.J.-based Acier acquired the site in 2017 for $10.8 million from an entity called 289 Washington LLC and subsequently secured approval for a three-phase project to total approximately 949 units in three towers. Subsequent to the City of Newark’s approval of 949 units, the developers received a designation of the project being in an area in need of redevelopment, which may qualify it for a payment in lieu of taxes (PILOT) tax abatement program that reduces property taxes to 10 percent of the revenue for 30 years. Phase I includes 30 affordable units.

“Parkview Financial is pleased to work with Acier Holdings on what will be an iconic addition to Newark’s skyline,” Paul Rahimian, president and CEO of Parkview Financial, said in a statement. “Newark continues to see billions of dollars in capital investment for new and redevelopment projects and we have identified this as an expanding rental market, convenient to Manhattan and other major job centers for its residents.”

“In 2020 we decided that the time is ripe for Newark to have a project built on par with major international cities such as London, Tokyo and obviously New York City, Acier said in a company statement following the Parkview Financial deal. “The City of Newark, who helped us considerably and supported us in every step of the process, shares our vision for the city and for the future of it.”

The deal marked Parkview’s second construction loan with Acier. It also supplied a $56 million financing in 2020 for the first phase of Jersey Walk, a 274-unit apartment community at 901 E Jersey Street in Elizabeth, N.J.

Andew Coen can be reached at acoen@commercialobserver.com.