Is Multifamily in a Bubble? 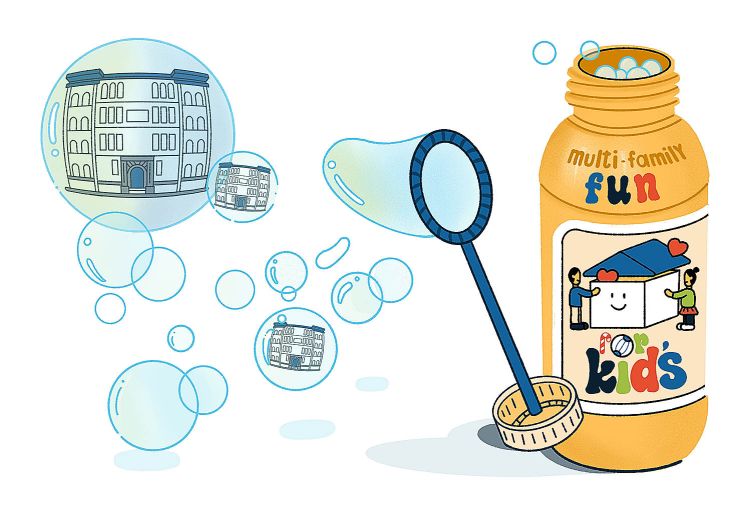 Fundamentally, the case for multifamily has always been a simple one: people need somewhere to live.

The COVID-19 pandemic has made that case even stronger. People still need somewhere to live, but it’s no longer as certain as it once was that they’ll need physical places (or, as many places, anyway) to go shopping or stay while on vacation or for in-person work. Long a favored asset class among commercial real estate investors, multifamily now seems like an even better bet by comparison.

That has translated into record amounts of money flowing into the sector. According to CBRE’s 2022 Real Estate Market Outlook, investors pumped roughly $213 billion into the space in 2021. The firm predicts that figure to rise by at least 10 percent in 2022, to $234 billion or more. Inevitably, with that kind of capital sloshing around, questions arise about the possibility of a bubble.

“Multifamily is definitely the most liquid, most accepted product type, which in some ways helps keep pricing more stable,” said David Perlman, managing director of capital markets and head of the New York office at Thorofare Capital. “At the same time, how much can rates go down and how much can pricing go up before you have a retreat in that space?”

One red flag, Perlman said, is that cheap money is available even for what might be considered borderline projects.

“We’re seeing pressure on the debt side in terms of really aggressive assumptions and people chasing deals in markets that are a little more frothy or a little less stable and getting institutional kind of pricing,” he said. “People are super aggressive right now on their underwriting, so any [downward] movement could mean they have to put cash into the deal.”

Solomon Garber, a partner at Bridgeton Capital, likewise said that he is noticing more and more multifamily deals with very little margin for error.

“They are all relying on amazing, perfect capital markets execution,” he said. “They are all priced to perfection. They are all going to improve operating expenses. They are going to operate it more efficiently than the last guy, yet they are coming from out of town. Property taxes are never going to go up.

“What happens when they go to refi the short-term bridge debt in two to three years and rates are up and, say, there aren’t as many lenders competing for this stuff, or they didn’t quite hit their marks? Nobody wants to refinance a failed business plan, or a business plan that fell behind.”

Also, the peak might’ve already passed, raising the specter of any bubble there may be popping soon.

“Multifamily hasn’t seen this level of pricing in a long time,” said Marc A. Hershberg, managing partner and CEO of Topaz Capital Group. “So undoubtedly we’re at a historic high, and I do question how much higher we can go and how much longer the dance will go on for.”

He cited a number of factors — including ongoing inflation, supply chain shortages, and the likelihood of interest rate hikes from the Federal Reserve over the course of the next year — as potential headwinds for the greater multifamily market.

Hershberg noted that for multifamily builders and developers, the race is on to get their projects underway and out of the ground, in an effort to refinance before interest rates go up. In New York City, too, there’s the added rush to beat the June expiration of the 421a incentive, a tax exemption that makes multifamily development less expensive. Moreover, the race has been increasingly challenging due to labor shortages, fluctuations in material pricing, and overall supply chain issues across the board, he said.

Perlman of Thorofare questioned whether investors have good visibility into rental home inventory, suggesting that the growing pool of single-family rental properties and hotel-to-multifamily conversions aren’t being fully accounted for.

“Home rental products are now being done on a larger scale,” he said, adding that the development of a commercial mortgage-backed securities market for these products will likely grow it further.

“You can get securitization exits for these [single-family rental] deals and banks are lending on it as well as debt funds,” Perlman said. “So people are moving into that space more because the financing is there and you can get some scale. And I think that is adding a lot of supply to certain markets.”

People searching for signs of a multifamily bubble could do worse than look to recent reports that former WeWork honcho Adam Neumann has invested around $1 billion in the space, Ann Gray suggested half-jokingly. She’s president-elect of the Royal Institution of Chartered Surveyors and principal of Gray Real Estate Advisors.

That said, Gray doesn’t see a retreat on the horizon, noting that supply of housing still lags demand in many markets.

“The multifamily sector really suffered in 2020 from delinquencies, eviction moratoria, and a backlog of sales transactions from that period,” she said. “So I think what is happening right now is a recovery and a rebalancing.”

“Why is there so much activity [in multifamily]?” Gray added. “Is it because of speculators driving prices up, or is it because the cost of housing production and demand is causing the inherent value of the asset to be high? If people were buying unleased buildings and looking to flip them without tenants, then we’d be looking at dangerous territory. But projects are leasing quickly. They are not offering incentives. Rents are going up, and rents can go up on an annual basis in a way other commercial products can’t. So there are a lot of reasons why multifamily is still very healthy.”

So multifamily remains one of the more attractive asset classes within commercial real estate. Hershberg suggested that that could keep funds flowing, offsetting his aforementioned concerns.

“There is so much liquidity, and there are limited derivatives of fixed income like multifamily that are good hedges against inflation,” he said. “And everyone is scared about inflation. There aren’t currently any more promising alternatives within the same risk profile that multifamily offers today.”

Garber said that while he thinks a correction in multifamily is likely, he can nonetheless imagine a scenario where the segment continues to boom for a time.

“You have rates staying relatively low,” he said. “Cap rates are pretty low because people can’t really find yield. The bond market for this stuff stays healthy, and they are just washing in so much liquidity. And a lot of markets in the United States continue to prosper.”

Bubble potential does appear somewhat market specific. For instance, while the Southeast could be in danger of becoming overheated, the New York City region is still recovering from a slump that predates the pandemic — due to tenant-friendly laws the state legislature passed in mid-2019 — and that deepened during it.

“New York got hit pretty hard during COVID,” said Martin Nussbaum, a principal of Slate Property Group, adding that people leaving the tri-state area and other major cities during the pandemic helped further fuel multifamily growth in portions of the South and the Midwest. “So there was a big push of rental growth in those submarkets, where in major cities like New York, Chicago, Los Angeles, there was not.”

Nussbaum said that the New York market has “significantly stabilized” over the last six to 12 months with occupancies rising back into the mid-90 percent range and rents beginning to grow.

“You’re starting to see now for the first time post-COVID transactions start to pick up, both on the development side as well as in the existing multifamily market,” he said.

Shimon Shkury, founder and president of Ariel Property Advisors, said that as of the middle of 2021, data from his company had New York City 16th in multifamily property sales by market.

“I think there might be a bubble in other areas, but not New York City,” he said, suggesting that this could lead to increased investment in New York multifamily relative to frothier markets.

Jeffrey Simpson, managing partner at Arch Companies, noted that his firm was, in fact, increasing its activity in the New York multifamily market after having pulled back several years ago. “Our New York exposure is less than it has been since around 2017, but we are doing more here in New York again,” he said.

Simpson said that in terms of overheating, he is most concerned about garden-apartment product in secondary and tertiary markets. “That’s really where my head is at [regarding] the potential for recalibration,” he said.

Not that he’s certain about it, though.

“There are people who tell me I’m absolutely wrong, and they have a really good argument,” Simpson said. “Some people would almost say that multifamily apartments are as good as a credit-backed bond — which is kind of what the government says when they do Freddie [Mac] and Fannie [Mae] loans — and that the investor sentiment is so strong that the yield expectations have dropped and the risk profile has changed so that billions of dollars will continue to go into garden apartments.

“It might be that pension fund advisers can allocate X amount of dollars to Class B and Class C apartments in the South,” he said. “And, if that is true, then the cap rates will stay low.”

Simpson noted that Arch has been active in this garden-apartment market.

“We did take a pretty large allocation with our own strategy … and that has worked out pretty nice for us,” he said. “But how much more of it can we acquire? I don’t know. I’m not sure.”

That said, Simpson is currently planning a trip to look at around 2,000 such apartments that he feels he might be able to do something with. “So, yeah, I’m talking out of both sides of my mouth,” he said. “Because I’m telling you it’s hard to buy — and it is. Anyone who does what I do will tell you it is hard to buy. But opportunities do exist.”

And, even if things do take a turn for the worse, multifamily is still a pretty good place to be, Perlman of Thorofare suggested.

“Historically with multifamily, when it does go bad, the loss severity on the deal is low,” he said.

“I don’t see this as being like a colossal blow,” Bridgeton Capital’s Garber said. “I just don’t see the picture being that rosy for that long.”