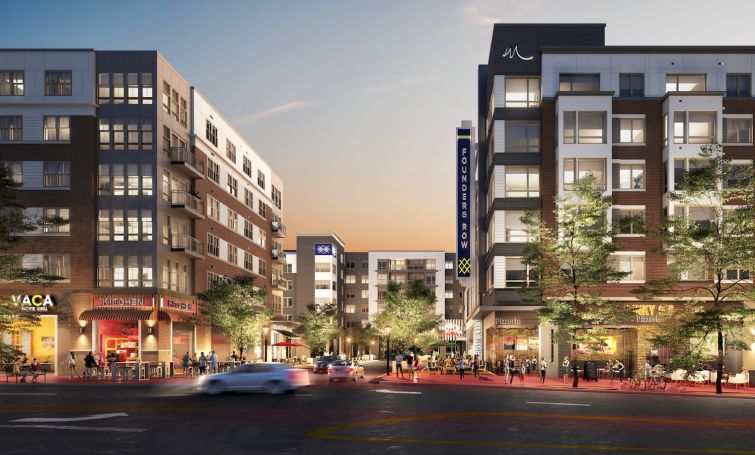 The trio of restaurants, Chasin’ Tails, Nue and Roll Play Vietnamese Grill, will share the same kitchen in a unique three-in-one model in the 7,500-square-foot space.

All four restaurants will open in late 2022.

“These leases represent a follow-through of the vision that we set out almost a decade ago,” Joe Muffler, managing director of mid-Atlantic development for Mill Creek Residential, told Commercial Observer. “Making sure we curate a boutique destination environment has always been imperative for us.”

He admitted that it was a struggle during the pandemic, with not much leasing activity happening.

“We had to take a step back and say, ‘We’re ok pausing and waiting for those operators to come back to follow through on our plan,’” Muffler said. “I’d be lying if I said I thought we would be getting a Michelin-starred chef to Falls Church, so we’re incredibly excited about the tenancy we’ve created and it will be indicative of what’s to come here at Founders Row.”

The original iteration of the development began around 2011, and was being developed by Vienna, Va.-based Spectrum Development. At the time, it was slated to have a drive-through CVS and some condominium units. Mill Creek came on board in 2013 as the lead developer, and took the project in a different direction.

“Falls Church has everything you could want, but really lacked that downtown, lifestyle, entertainment environment,” Muffler said. “Now it has a destination to have a date night, or bring a family out to a large-format setting.”

Some of the apartments are already open, and a handful of retail tenants will be opening in late summer and early fall.

Chris Wilkerson of JBG Smith represented Mill Creek on the leases. The representatives for the tenants were not disclosed.

Requests for comment from the tenants were not immediately returned.