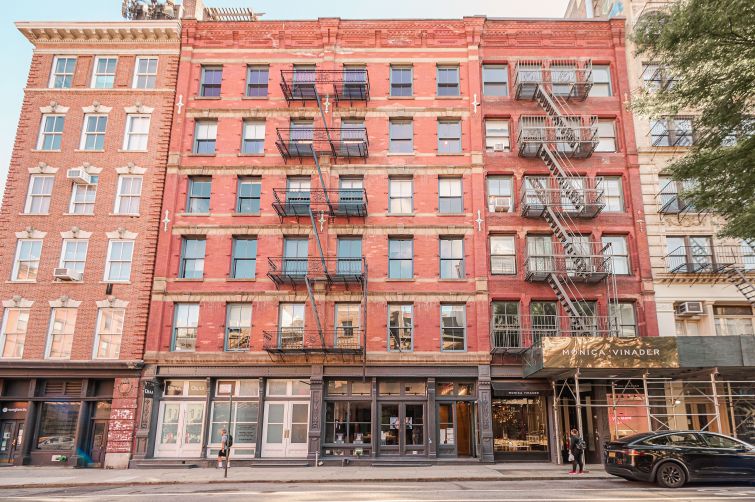 Vornado Realty Trust sold both properties, which consist of more than 120,000 square feet, for an undisclosed price. A source told CO in September that KPG paid $85 million for the two SoHo assets.

“The sponsorship has done a great job of both identifying and putting together two business plans that will unlock significant value within the portfolio,” Stolly said. “We were able to leverage these plans into two favorable debt executions.”

KPG is acquiring the portfolio at an over 65 percent discount compared to what similar office properties were trading at 22 months ago before the COVID-19 pandemic took hold, according to Stolly. Lenders were attracted to the sponsorship team’s “significant equity upside” given that their rental rate pricing and market cap rates have remained stable during the pandemic, Stolly said.

“We have seen lenders circle SoHo as a target submarket over the past six months and these financings are a great example of lender appetite for well-located properties with prominent addresses — especially when coupled with institutional equity,” Roeschlaub said.

David Perlman, managing director at Thorofare, said the firm was “excited to expand its New York City presence” and described the SoHo market as an area leading the Big Apple’s rebound. He said the deal was attractive in large part to it containing “prime SoHo property” that was formerly the headquarters for Topshop with price per square foot below $200.

“We believe in KPG’s execution ability, based on their 446 Broadway project, to transform the space into class A office and retail,” Perlman said. “We appreciate the joint collaboration amongst all parties to get this deal done.”

Officials for Brightspire did not immediately return a request for comment.

KPG announced the purchase of the portfolio Friday with plans to undergo a full building renovation at 40 Crosby as part of repositioning that aims to transform it into a luxury office building. Planned upgrades include flexible floor plates that can cater to either multiple tenants or a flagship headquarters.

“By never wavering in our belief in the resilience of the greatest city in the world, we are being rewarded with the ability to acquire a gorgeous cast-iron building and a stabilized boutique office asset, both in premiere locations at incredible pricing,” Rod Kritsberg, KPG’s co-founder and chief investment officer, said in a statement.