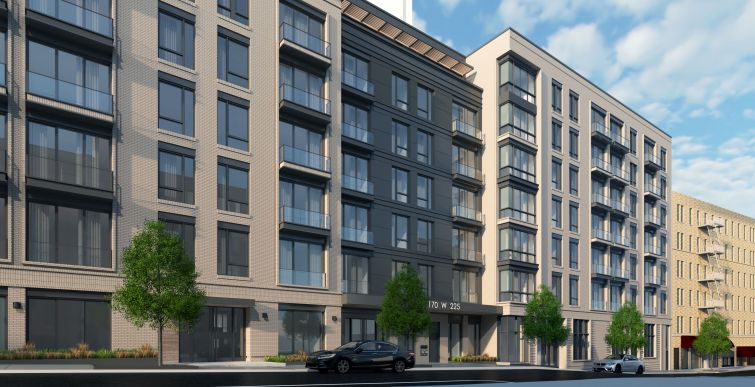 Timber Equities is planning to build a seven-story residential building designed by Marin Architects encompassing six lots at 164-176 West 225th Street. The project has been in the works for about five years and Timber Equities has already started construction, Mitch Perle, founding principal at the firm, told CO.

Timber Equities expects to finish the development in mid-2024, and the firm hasn’t settled on a general contractor or engineer for the project yet, Perle said. The building will remain home to the Water of Life Church, which gave up its former space and land in exchange for an 8,500-square-foot condo on the building’s ground floor that it will own outright, with no debt, Perle said. The church also scored $1.94 million and two parking spaces out of the deal that closed on Nov. 24, after four years of negotiations, City Rental Realty’s Kelvin Pichardo, who represented the church, told CO.

Thirty percent of the development’s 115 housing units — mostly one-bedrooms with some two-bedrooms mixed in — will be affordable under the city’s “Affordable New York” housing program. In exchange for having some of the apartments listed for less than the area’s median income, the developers get a 100 percent tax exemption for a three-year construction period and a 35-year partial tax exemption after construction completes, according to the city.

“This project, as many others that we’re doing, are only made possible with the Affordable New York program,” said Perle.”This is not an area where some firm from Midtown goes and buys a property and says, ‘Hey, we want to do something up there.’ This is very much an area we are in. We own other properties. We know the stakeholders. We understand what people want.”

The property will also include 60 parking spaces, Perle said. The building’s design is meant to look a bit nicer than someone would expect affordable housing to look, said Walter Marin, senior partner and founding principal at Marin Architects. The facade, which is staggered outwards, gives the building a more textured appearance, he told CO.

“We’d like to think that we put together a project that one would think would not belong there,” Marin said. “What I mean by that is simply that it’s better designed. It’s not a simple brick-and-mortar kind of scenario but something that one would normally see in higher market-rate housing. You look at it and you think it’s on Park Avenue.”

Thanks to the building’s elevation difference on either side, Marin was able to use the contrast to his advantage and give the church condo unit higher ceilings, as would be present in a more traditional cathedral, he added.