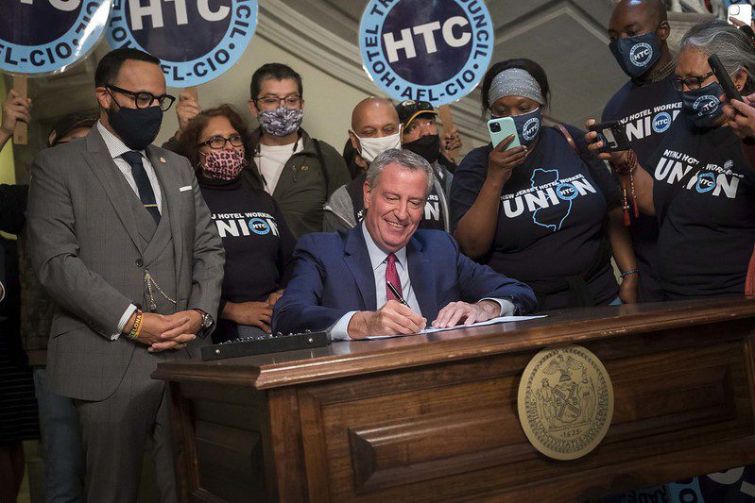 New York’s hotel owners are suing the city to stop a new law mandating pandemic-ravaged hotels pay a weekly severance for its furloughed employees if they remain closed after the end of the month.

The new city law would require any hotel with more than 100 rooms that fired more than three-quarters of its employees during the pandemic to pay each of them $500 per week if the hotel doesn’t reopen by Nov. 1.

Hospitality leaders argued the legislation would burden hotels still struggling to fill their suites even after the city reopened this year and could force some operators to shutter for good.

“We’re disappointed that the city chose to risk future tourism and our local economy by passing this legislation which forces hotels to pay money they do not have,” Vijay Dandapani, president and CEO of the Hotel Association of New York City, said in a statement. “Ultimately, this bill may force owners to close and leave New York altogether.”

But hotel union leaders, who lobbied city officials for the additional benefits and rallied with the mayor at City Hall last week, blasted hotel corporations for spending money on lawyers instead of staffers who keep their businesses running.

“What’s especially curious is why an association that represents the hotel industry would try to stop legislation aimed at encouraging hotels to reopen,” Rich Maroko, president of the Hotel Trade Council (HTC) which represents hotel workers and is one of the mayor’s staunchest allies, said.

One view both bellhops and hotel tycoons agree with is how badly the pandemic ravaged the hospitality industry. More than 200 hotels have closed in New York since March 2020, putting 47,000 employees in the state out of work.

Labor leaders pushed for health and safety protocols within hotels at the beginning of the pandemic. But as the spread of coronavirus showed few signs of abating last summer, HTC officials negotiated short-term extensions for health benefits and severance packages for laid-off workers that have since run out.

Scores of hotels still remain closed throughout 2021 and the industry may not fully recover until 2025, a CBRE study found. The latest hotel occupancy rate for city hotels over a 12-month period was only 48 percent, compared with 86 percent during the same period in 2019, according to Smith Travel Research.

But demand could begin to rise as the city lurches into the holiday season and large-scale events like the New York City Marathon return to the calendar.

Several hotels have already announced they would reopen in the coming weeks after de Blasio signed the new severance law. The Grand Hyatt is reopening on Nov. 1, potentially bringing back 25 to 30 percent of its 700 workers, and the New York Hilton welcomed back guests on Oct. 5 as 350 workers from its 1,100 workforce initially returned, HTC officials said.