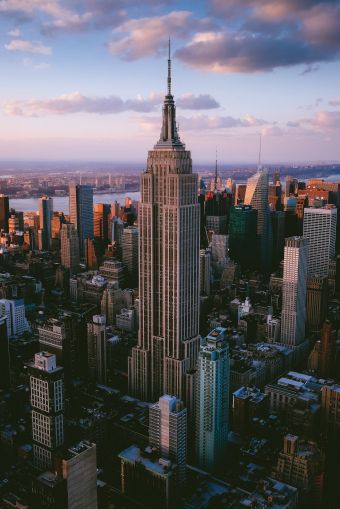 On Nov. 8 international travel — at least for the fully vaccinated — is set to return to New York City and other tourist hot spots across the U.S. And famous travel destinations like the Empire State Building and Times Square are gearing up to receive them.

In honor of flights from the United Kingdom transporting tourists to the U.S. for the first time in more than a year, Empire State Realty Trust (ESRT), which owns the famed New York City tower, is partnering with the British consulate, city tourism arm NYC & Company and British Airways to light the building on Monday night.

Among U.S. cities, New York was the top destination for U.K.-based travelers and accounted for the most bookings at airline Virgin Atlantic after the White House first announced on Oct. 15 that travel restrictions would be lifted in November, according to a Virgin Atlantic poll. Delta Air Lines saw bookings from outside the U.S. jump 450 percent ahead of the Nov. 8 border opening, The Atlanta Journal-Constitution reported.

Airbnb, which saw U.S. stays booked by foreign guests starting Nov. 8 increase by 44 percent in the week following the announcement, found that most of its guests were headed to the U.S. from Toronto and Vancouver in Canada along with London, Paris and Santiago.

Those travelers are venturing to more than 4,000 different destinations across the United States, but the five most popular are Los Angeles, Miami, New York, Orlando and the South Florida Atlantic coast, in that order, according to Airbnb. To keep up with that demand, AirFrance announced it would operate seven weekly flights to D.C., 17 to Los Angeles, 12 to Miami and 35 to New York. And New York is pulling out the red carpet.

The Empire State Building is hosting a lighting ceremony to celebrate the return of international travelers from the U.K. with passengers who will arrive over the weekend. ESRT’s Jean-Yves Ghazi, president of the building’s observatory, said he was excited to see visitors return to the iconic tower.

“My biggest joy is witnessing the emotional high that is achieved when they first see the views [and] when they go to our fun exhibits and discover New York City from the heart of it all,” Ghazi told Commercial Observer.

“Times Square has always relied on visitors from all over the world, so we anticipate it to have a great impact on our businesses and especially Broadway,” Harris said. “Times Square is 0.1 percent of the city’s land mass, but 15 percent of its economy, so the success of Times Square’s recovery is vitally important to the overall success of New York City’s recovery.”

Today, Times Square is seeing peak pedestrian counts of more than 250,000 people a day, up from the 140,000 daily visitors heading to the LED-lighted city center in May of 2021 and far higher than the 30,000 peak visitor counts in April of 2020. But visits have still not returned to the levels Times Square saw before the pandemic, numbering 365,000 people a day on average, according to the alliance.

The return of international tourism — which has a far greater impact on the city’s economy than domestic, according to the state comptroller’s office — is crucial to the city’s recovery, said Andrew Rigie, executive director of the New York City Hospitality Alliance.

On average, international visitors spent $1,709 while visiting New York City in 2019 compared to $458 per domestic traveler, according to the comptroller. The five biggest spenders in 2019 came from China, the United Kingdom, Australia, Brazil and France, with the most tourists coming from the U.K.

“New York City is an international, global city,” Rigie told CO. “That’s represented in all the different cuisines our restaurants offer, and particularly restaurants in neighborhoods that tourists visit … [Travelers] want to come back and visit and see friends and family and go see what New York City’s like as we hopefully emerge from the pandemic.”