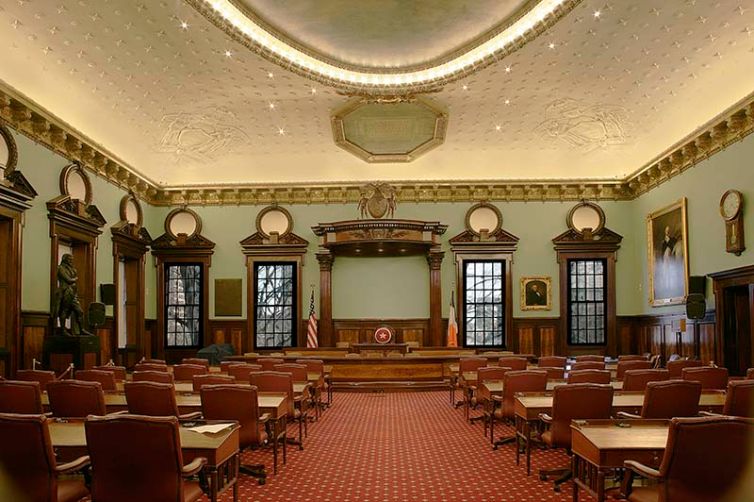 The race for the speakership of the 51-member New York City Council, which meets here in City Hall, will likely run well into the new year, unless Eric Adams plays kingmaker — which as of early December seemed unlikely. Photo: NYC.gov

When New York City’s power brokers descended on San Juan, Puerto Rico, hours after the November elections, some expected the next City Council speaker would emerge under the palm trees.

New York lawmakers and their aides partied with lobbyists, labor leaders, nonprofit executives and other operatives over piña coladas at poolside hotel cabanas. But, by the end of the five-day SOMOS conference, nothing materialized.

This year the race for the second-most powerful job in the city, which can deeply impact the interests of the commercial real estate industry and which the council’s 51 members fill internally, is as wide open as it has been since at least 2001.

It has also been a slog.

Seven politicians — Manhattan council members Carlina Rivera, Keith Powers and Diana Ayala; Manhattan Council member-elect Gale Brewer, a former member, too, and the outgoing Manhattan borough president; Brooklyn Council member Justin Brannan; and Queens council members Adrienne Adams and Francisco Moya — are currently vying for the position. Some have been cajoling their colleagues in meetings and on phone calls, discussing their priorities in online forums, and attending events throughout the city since the June primary.

Whoever can corral 26 votes will claim the speakership but the number of viable candidates in the race means that forging a winning coalition could stretch well beyond Eric Adams’ mayoral inauguration on New Year’s Day.

“There’s a similarity between real estate and politics. Time kills deals. You don’t want to make your deal one minute after you absolutely have to,” one Manhattan commercial real estate executive said. “People will wait until the last minute because the deal has to hold through then.”

Next year, the City Council will contend with Mayor-elect Adams’ housing and development agenda, review new rezonings, convert underutilized hotels, reduce building emissions and invest in public housing, on top of crafting the city’s $102 billion budget and steering its economic recovery further through the pandemic.

All the candidates are left of center, but if the commercial real estate industry gets its way, the next council leader will have more in common politically with Adams and won’t come from the body’s growing progressive bloc.

“The real estate world is cognizant that they’re always in the crosshairs of the City Council; however, there seems to be a consensus that we don’t want a radical as speaker,” said Council Minority Leader Joe Borelli, a Staten Island Republican. “The City Council is never not going to be a progressive body, but there’s a genuine consensus that there needs to be a check in place.”

As recently as four years ago, the speakership was won thanks to alliances made between the Democratic Party’s powerful county leaders.

But power in the city has become increasingly balkanized as longtime party bosses were defeated at the ballot, lost control of their seat, or stepped aside voluntarily. Four of the city’s five county chairs have changed hands in the past three years while the fifth survived a coup in 2019.

At the same time, the city’s generous public matching funds program, coupled with its new ranked-choice voting system, helped a record number of first-time candidates win office without dedicating much of their time dialing for dollars.

Suddenly party bosses could no longer wield the threat of pulling funding from a favored candidate since it became easier to run and win with less money. Redistricting decisions have been pried away from partisan lawmakers who could punish rebellious colleagues and turn those decisions over to an independent commission.

That doesn’t mean their power has diminished entirely. Assemblywoman Rodneyse Bichotte, the Brooklyn county leader, and Congressman Gregory Meeks, her Queens counterpart, still have the ears of several members of their delegations.

“County leaders don’t have the votes they used to,” said Hank Sheinkopf, a Democratic political consultant. “There are many more women and progressives in the council who don’t have allegiance to county organizations, so it’s a crapshoot. This is a great test of the county leaders to see whether they still have power left to do anything, whether they can influence this vote. They have the power of persuasion.”

New factions have formed to fill the vacuum left by weakened party bosses.

Congress members, especially Hakeem Jeffries, Nydia Velazquez and Adriano Espaillat, have mentored the next generation of leaders in their districts, building fiefdoms of influence in the process.

Organized labor, along with the Working Families Party, has supplanted the Democratic Party’s traditional role of providing well-trained campaign workers, with means of financial support, including funding direct mail campaigns. The Democratic Socialists of America have elevated several first-time candidates into state and city offices through its vaunted ground game.

And a rejuvenated Republican Party, which won seats in northeast Queens and southern Brooklyn, could count as many as seven members in its caucus if conservative Democrats Bob Holden and Kalman Yeger choose to vote with them.

“It’s like the ‘Great British Baking Show,’” said Marjorie Velazquez, a Bronx Democratic council member-elect. “You’re given a list of ingredients and what you need to bake and you add your own flair and whatever tastes good works.”

So far the candidates have fallen into different camps. Brannan, a favorite among Brooklyn Democratic Party insiders, has sought to build support from a mix of Democrats loyal to party leaders, progressives, and even Republicans. Moya has received support from allies close to Mayor-elect Adams, although he told media site City & State he doesn’t have 26 votes yet.

Rivera has targeted the council’s progressive bloc, which is also considering throwing support behind Ayala, Brewer or Powers, sources said. However a slew of progressive groups have urged all speaker candidates to reject support of any Republican member, although it’s unclear whether the candidates will listen to them.

Real estate industry leaders have quietly indicated they are more inclined to embrace Brannan, followed by Powers, Adrienne Adams or Moya, and are less supportive of Rivera, Ayala and Brewer for the position, sources said.

“Most real estate folks would prefer to see a Justin speakership but that may turn people off,” one Brooklyn real estate executive said of Brannan. “I don’t think Justin would be psyched about that story.”

The speakership isn’t the only title being fought over this winter.

Speaker candidates typically dangle those positions to members in exchange for their support or to secure a bloc of votes since committee chairmanships are made at the speaker’s discretion. But this year there’s a snag.

The current land use chairman, Bronx Democratic Council member Rafael Salamanca, wants to keep his seat, multiple sources said. He is likely to keep it, too, because ousting him could not only cost his support but that of much of the Bronx delegation too.

“I think he’ll stay. People like him and he’s been doing a reasonable job,” one incoming council member said. “I don’t see a world where he’d be forced out.” Salamanca did not return calls for this article.

The real estate industry has been content with Salamanca, who has largely promoted new development across the city, even though he objected to the de Blasio administration’s Southern Boulevard rezoning plan in the Bronx out of concern the plan would displace neighborhood residents.

For developers, it may be more a case of sticking with someone they can work with than a new face whose land use policies may be murkier.

“The members from the less affluent neighborhoods tend to be a little more progressive on land use issues than members from more affluent areas,” the Manhattan commercial real estate executive said. “In New York, every progressive always has a good reason for not building affordable housing in their neighborhood, and neighborhoods that are most resistant to development and housing are the wealthy, which are often landmarked as well.”

Rezoning votes have dominated the final weeks of the council calendar as Council Speaker Corey Johnson aims to wrap up several projects before his term runs out at the end of the year. The council has already passed the Gowanus rezoning and the New York Blood Center’s expansion on the Upper East Side — the second against the local council member’s objections. The SoHo/NoHo rezoning will likely be taken up in the council’s last meeting of the year in mid-December.

But development policy and member deference, a policy where lawmakers typically defer to the local representative’s decision on projects in their district, has not come up in conversations between speaker candidates and other members, several council sources said. Instead, members are looking to use the leverage they have over their votes to determine how to get the best committee assignments, leadership posts and funds for their districts in the future.

“The issue is for council members to figure out what they agree on rather than what they disagree on,” Sheinkopf said. “It’s not just about who gets what, but who doesn’t get what and who has the patience to wait for the next time around.”

The most significant figure who can determine who becomes the next speaker is the next mayor — if he wants to play a role.

“It’s very difficult for a mayor who is the titular head of the Democratic Party in New York City not to put their thumb on the scale in some way,” the Manhattan executive said. “They have preferences for who can protect them from an avalanche of lousy legislation landing on their desk that they either have to sign, veto or implement.”

So far Mayor-elect Adams has said almost nothing about his preference for who should run the City Council. He has been focused on putting his administration together, while taking a 10-day trip to Ghana ahead of his inauguration.

But his closest adviser, Ingrid Lewis-Martin, warned Democratic allies that the mayor-elect would not support Rivera’s speaker candidacy because the progressive would oppose some of his agenda, the New York Post reported. Brooklyn Democratic sources believe Adams favors Brannan while other associates are reportedly leaning toward Moya. Adams may not make his choice known until a deal is close to being made.

“The biggest question is who does the mayor-elect believe can be a great partner to run the city,” said Carlo Scissura, president and CEO of the New York Building Congress, a construction industry group. “We have a lot of challenges in the city. Any mayor would want somebody they can work with.”