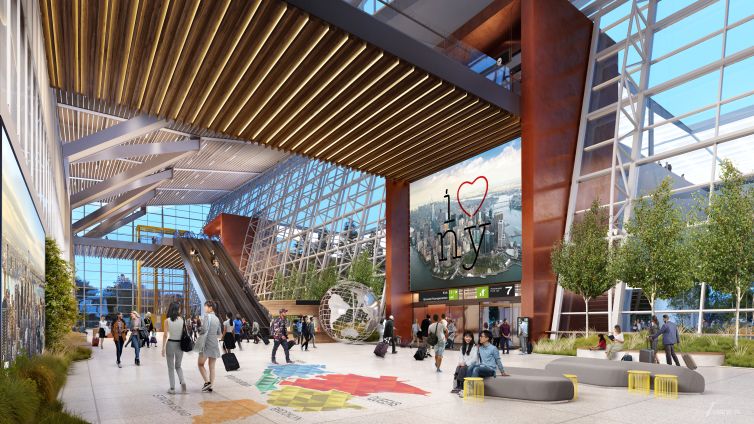 Renderings of the new Terminal One at JFK Airport. Credit: PANYNJ

Terminal One at JFK Airport will get a redevelopment of 2.4 million square feet, adding 23 new gates, something Gov. Kathy Hochul believes will be symbolic of New York’s effort to move beyond the pandemic, and welcome international travelers back.

With construction starting in 2022, Rick Cotton, executive director of the Port Authority of New York and New Jersey, said the 134 acres to be redeveloped will be done almost completely with investor funding from companies like Carlyle Group, Ullico and Johnson Loop Capital through a public-private partnership.

About two-thirds of the 23 new gates in Terminal One will be open for business as early as 2026 and will be 250 percent larger than the existing wing of JFK, Cotton said. Hochul said the rebuild will fit within a footprint currently occupied by terminals One, Two and Three.

“What we’re announcing here today is something that is hopefully jaw-dropping for people,” Hochul said. “I want them to know that this is just the beginning. Again, number one focus is on the health of the people, but also the health of the economy and making sure that we don’t slide any further, that we go back to where we were and then exceed that by tenfold.”

To be built in a series of phases, Cotton said the deal reached between Port Authority leadership and the private financial partners will be up for a vote at the agency’s monthly board meeting on Thursday.

The funding from the private investors includes about $7.2 million for design and construction and $2.3 billion in financing and other costs. Carlyle Group will become the majority owner of the terminal with a 70 percent stake.

“But the new terminal will not just be a major upgrade in terms of operating capabilities. They will offer a world-class customer experience. Every place in the terminal, there will be huge amounts of natural light and high ceilings. They will be sustainable in every way with a wide variety of green features,” Cotton said. “As we’ve done at LaGuardia, we’re going to bring local New York concessionaires to the terminal along with inspiring public art at LaGuardia. The five new public art installations received enormously positive reviews and feedback and we intend to duplicate that at the JFK terminal.”

The project was delayed by up to two years because of the pandemic as there was a need to financially “restructure” the deals involved, according to Cotton. Now, it has the potential to create 10,000 total jobs, of which 6,000 are for construction alone.

For rail commuters, U.S. Sen. Chuck Schumer announced at a separate press conference a deal with the Metropolitan Transportation Authority (MTA) and Amtrak to fast-track repairs on the East River tunnels going into Penn Station as well as funding for four new Metro-North Railroad stations in the Bronx that will give eastern Bronx residents one-seat access to Midtown.

Schumer said he was able to secure additional funding to “supercharge” these projects thanks to the $1.2 trillion infrastructure bill passed last month.

Hunts Point, Parkchester/Van Nest, Morris Park and Co-op City will get new stations on Metro-North, as was announced by former Gov. Andrew Cuomo in May. For residents of this section of the Bronx, what used to be an hour-long trip via mass transit to Midtown, could take as little as 20 minutes, according to the MTA.

“Today’s agreement with Amtrak and the MTA will fast-track Penn Access, bringing a new mass transit line to the transit-starved Bronx, totaling four new stations,” said Schumer. “In addition, the agreement will break the logjam stalling the urgent need to repair and upgrade the [Superstorm] Sandy-damaged East River Tunnels, which are vital to all [Long Island Railroad] riders.”

Amtrak will be committing $500 million for Penn Station improvements while the MTA will commit $432 million to repair damage done to the East River Tunnels during Sandy.