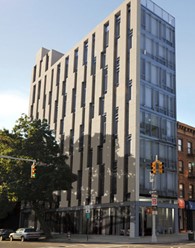 The three-year loan facilitated the refinance of 2338 Second Avenue, 329 Pleasant Avenue and 2211 Third Avenue in East Harlem, according to information from HAP. Altogether, the three properties have 160 apartments, and each has retail space.

Allegiant Real Estate Capital CEO Randy Reiff said his group is “excited about HAP’s commitment to New York City and East Harlem,” which was one area, in particular, that conceived them to get on board.

HAP’s Deputy CEO and General Counsel Andrea Lawrence, alongside the firm’s Chartered Financial Analyst, Will Wang, spearheaded the closing of the loan.

HAP CEO Eran Polack said the financing will allow the firm to “bring our East Harlem portfolio to its full potential. As a long-time New Yorker, and someone who has spoken openly about my belief in the economic recovery of New York, it is encouraging to see this level of activity in the real estate market.”

HAP’s holdings include 10 properties throughout the New York metropolitan area, headlined by The Maverick, a more than $500 million, two-building, luxury mixed-use multifamily development at 213-227 West 28th Street in Chelsea.

“The Maverick offers residents not only a place to call home, but a place for residents to thrive and focus on a person’s well-being,” Polack said in October. “This landmark sale is an encouraging sign that New York City is on the road to recovery.”