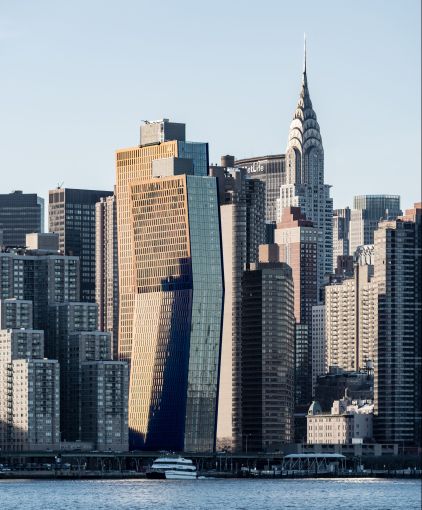 The sources said that “all options” are being considered for the heavily competed debt opportunity, with the eventual loan-to-value expected to be around 65 percent — which would equate to a roughly $550 million loan — and a decision on the lender is expected to be finalized shortly.

Earlier this week, Bloomberg reported that the copper-clad towers — previously owned by JDS Development Group and Baupost Group — were being sold to Black Spruce for $850 million, in one of the largest residential asset trades post-COVID-19.

And — in addition to multifamily properties being the hottest ticket in terms of investment right now— it’s not difficult to see why.

The 48-story property sits at 626 First Avenue with views of the Empire State Building, the East River and the Manhattan skyline. It’s also part of a strong residential market with unique demand drivers, located in the epicenter of New York’s life sciences corridor,  but also within easy walking distance to Grand Central Terminal and the United Nations Headquarters. Further, there are more than 10 primary- and higher-education institutions within 10 blocks of the asset, making its units appealing to young families.

The asset also benefits from a 421a tax abatement, which doesn’t expire until June 2038, per an offering memorandum shared with CO.

Once occupied by a Consolidated Edison power plant, American Copper’s 6.4-acre site was purchased by JDS in 2013 for $172 million. Construction began in 2014, with American Copper West opening in April 2017 and American Copper East in late 2018.

The two towers, designed by SHoP Architects, are connected by a three-story sky bridge, creating a vertical community and giving the visual impression of the structures dancing together.

Hole in the Wall and Bright Horizons lease 1,595 square feet and 7,700 square feet in the East and West towers, respectively.

Its top-notch, 60,000-square-foot amenity package features a rooftop bar and lounge with an infinity pool, a two-story fitness center with yoga and pilates studios, a private spa, a juice and health bar and a chef’s catering kitchen.

Black Spruce officials did not immediately return a request for comment.

Cathy Cunningham can be reached at: ccunningham@commercialobserver.com.