Los Angeles REIT has closed on $1.4 Billion in acquisitions this year 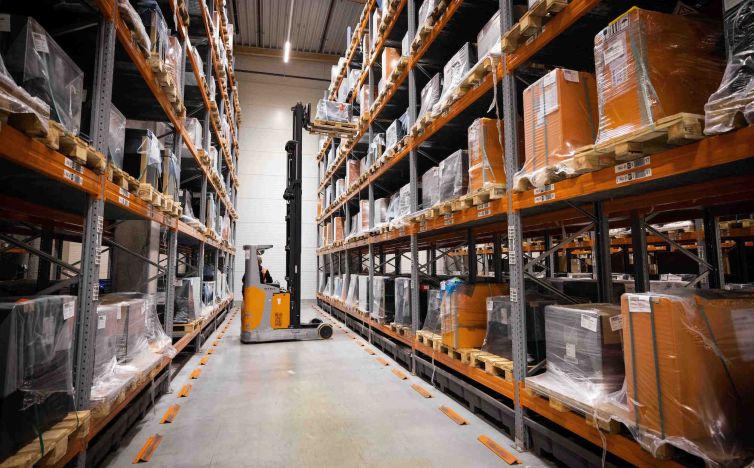 A man works with a forklift between warehouse shelves in a logistics terminal of a manufacturer. Photo: Christian Charisius/picture alliance via Getty Images

“Our $1.4 billion of investments completed year-to-date within infill Southern California are indicative of Rexford’s growth opportunity as we deepen our market penetration within the nation’s highest-barrier industrial market,” CEOs Howard Schwimmer and Michael Frankel said in a joint statement.

The 119,145-square-foot building is leased to one tenant. Upon expiration of the lease, Rexford will reposition the property. The vacancy rate in the 112 million-square-foot “Mid-Counties” submarket — which comprises the communities that border L.A. and Orange counties — was 0.2 percent at the end of the third quarter this year, according to CBRE.

In the Inland Empire, Rexford agreed to pay $27 million, or $276 per square foot, for a 98,000-square-foot, single tenant building at 340-344 Bonnie Circle, located in the city of Corona. The 5.2-acre site is fully leased, but Rexford estimates current rent is approximately 45 percent below market averages.

After the lease expires, Rexford intends to sign a tenant at market rent. CBRE’s research shows the vacancy rate in the 319 million-square-foot western region of the Inland Empire was at 0.8 percent at the end of the third quarter.

After acquiring a 3.9-acre site at 6027 Eastern Avenue in the city of Commerce for $23.3 million, Rexford plans to redevelop the property into two buildings totaling 92,800 square feet of warehouse distribution space. The vacancy rate in the 273 million-square-foot submarket southeast of Downtown L.A. was at 1.9 percent, per CBRE.

In L.A.’s South Bay, Rexford acquired the Torrance property at 21515 Western Avenue for $19 million, or $108 per land square foot. The firm will redevelop the existing 56,199-square-foot retail building into an 85,520-square-foot Class A warehouse and distribution facility. The investment is projected to generate a 4.8 percent yield on total cost, Rexford said. South Bay includes approximately 218 million square feet of industrial space, which has a 0.6 percent vacancy rate, according to CBRE.

Finally, Rexford acquired the property at 12027 Greenstone Avenue in the city of Santa Fe Springs for $8.1 million. The 2.3-acre industrial outdoor storage site is adjacent to two existing Rexford storage facilities, and it is leased at a rent estimated to be approximately 80 percent below market rent.

Rexford also recently sold a property in Pasadena for $11.7 million. The four-building, 31,619 square foot property at 2670-2674 Walnut Street and 89-91 San Gabriel Boulevard was fully leased at the time of sale.

The acquisitions were funded using a combination of 1031 disposition proceeds and cash on hand. Proceeds from the sale were reinvested into the acquisition of the property in Commerce.

The L.A.-based REIT Rexford has been on a tear picking up industrial properties around California and dropped $286 million on three properties last month.