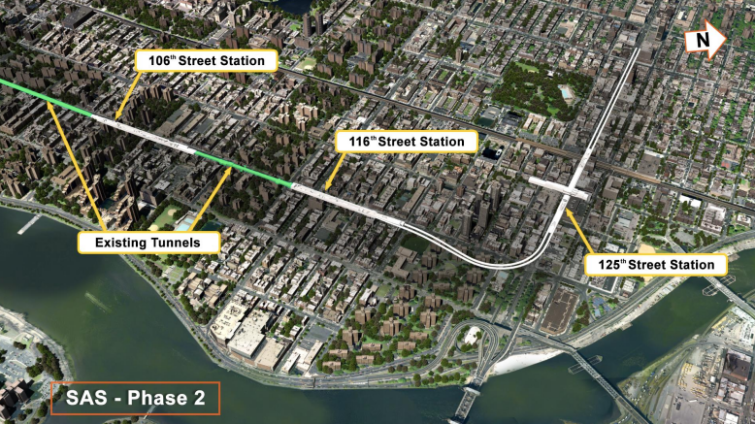 The $10 billion that has been set aside for transit infrastructure in New York will be a shot in the arm for the long-delayed Second Avenue subway extension, but the timeline is still up in the air.

The recently passed $1.2 trillion bill would give the Metropolitan Transportation Authority funding to get to work on the second phase of the Second Avenue subway project, which would extend the line from East 96th Street to East 125th Street.

The ​​Real Estate Board of New York (REBNY) is predicting major economic benefits from multiple aspects of the bill after President Joe Biden signed the bipartisan infrastructure deal into law on Monday evening, particularly for the Second Avenue subway which could help spur development in East Harlem.

“The fact that there’s increased demand for a second phase going up into East Harlem to help bring those commuters from Harlem — taking congestion off the 4, 5, 6 — back down into a commercial district, I think those are some of the key things we looked at for that corridor, and for that project overall,” Maya Kurien, the vice president of policy and planning with REBNY, told Commercial Observer. “But I think the main thing for us is that it will boost transit-oriented development, which is obviously a key priority for REBNY and our planning principles.”

REBNY is also expecting this to help the return to offices with one representative from the organization citing a Partnership for New York City study that predicted at least 49 percent of employees will be back in cubicles and boardrooms by January 2022.

While the Second Avenue subway has been almost a century in the making, with its first phase opening in 2017, REBNY believes the infrastructure bill is coming at a critical time for a rebound from the pandemic, regardless of the fact that the extension of the Q train up the East Side of Manhattan is still going to be a number of years away. Its construction will create jobs and prompt development in the meantime.

The estimated completion date for the $6 billion extension is between 2027 and 2029, but was determined before the pandemic and has not been since updated. But acting MTA Chair Janno Lieber said once the agency has the funds in hand, it may take a few months before it can move into the engineering and construction phase.

Utility relocation will be the first order of business, meaning the removal of 19th-century infrastructure under Second Avenue. Until then, uncertainty reigns over the timeline, according to Lieber.

Gov. Kathy Hochul, however, seems certain that the funding will be put toward the Second Avenue subway and called it a “critical priority,” on Oct. 28, as she talked about the projects that are a-go now that the funding is there.

“How about getting phase two of the Second Avenue subway, extending from 96th street to 125th, finally making good on that promise from long ago that we’ve made to Harlem in 1940,” Hochul said.

Despite the infrastructure deal, the MTA has plenty of other items on its plate.

MTA officials held their monthly board meeting on Wednesday and were focused on financial survival and providing reliable service with multibillion-dollar shortfalls, a perennial issue since 2017, according to MTA Chief Financial Officer Robert Foran. Recurring revenue will continue to gall the agency despite the one-off infusion from the federal government for capital improvements such as Second Avenue subway.

Mention of specific projects was limited to the East Side Access project to extend the Long Island Railroad to Grand Central Terminal during the November meeting, which was funded prior to the pandemic and is on schedule for completion at the end of 2022, and the Gateway Tunnel project, which will be a lifeline for Amtrak commuters into Manhattan.

“We have the luxury of running a lot of service and not raising fares because of what happened in Washington,” Lieber said. “We’re an $18 billion company that lost half of its customers and now we have to get them back. That’s job number one, two and three. All these other things are hugely important and must be simultaneously dealt with, but we’re not going to stop focusing on riders, their experience and whatever it takes to get them back.”

Sen. Charles Schumer, who helped broker the deal as senate majority leader, said on Tuesday that New York state and city officials will have discretion to some degree in terms of how the money is then allocated to projects such as the resiliency efforts in Lower Manhattan or the long-stalled Gateway Tunnel project.